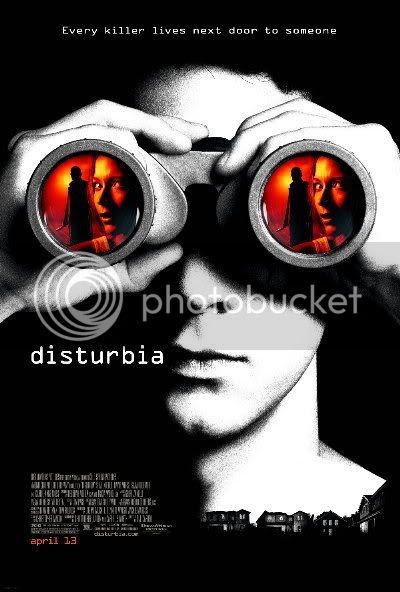 Disturbia is an excellent modern day "Rear Window".   Masterfully done it was near perfect suspense thriller.  And by near perfect I mean every element of the film seemed to click  at just the right moment.    I actually didn't have high expectations going into the film otherwise I would have seen it in the theaters ---I just thought it was going to be the standard  underwhelming thriller.     But I was pleasantly surprised.    I actually rented it mainly to see Shia LaBeouf   as Kale (Since he will be . Jones IV—which is the next big movie in my need to see list  (Raiders being my favorite movie of all-time)).  And yes this concept has been done many –many times before including the 80's comedy  "The Burbs"    but this time it was just done right.
----------------------------------------------
The movie begins with a jarring opening sequence that starts with the serenity of  a father and son fly fishing in Bishop (recognized the scenery—which was confirmed by commentary track)  and then quickly takes a tragic  turn with shocking abruptness.
-----------------------------
The rest of the film is basically a great modern tech –version (digital cameras and computers)  of the Hitchcock classic .    The film is  voyeuristic delight as the main character under house arrest and cut off from  his world of video games and Cable Tv—takes to watching the world outside the windows of his house.    Each window becomes a reality show basically ---From the cheating neighbor's husband and maid to the hottie that just moved in next door played by  beautiful   up and comer  Sarah Roemer ( as Ashley)  to the neighbor that he believes could be a murderer.
-------------------------------------
The film blends humor ---teen romance  and suspense perfectly –hitting all the right notes like a great  piece of music at just the right moments.  The cast is terrific –The pacing  just right  --The writing is on spot with great lines  such as    "Only in Disturbia ---where else can you get this kind of entertainment" as Kale  watches the mysterious neighbor next door with his cute neighbor.    Another great line as the villain played by David Morse   startles Kale  in the kitchen.   "Listen -----I get it----  I went to school –there are plenty of teachers  I wanted to just-- ------   Kill"   And then in a cool double meaning piece of dialogue  between  Kale and Ashley where she says   "Did you consider whatever look that girl had might have been something else----Did you consider maybe she liked being chased around  the house half naked"   And the ending with well set up and thrilling.
So many great little moments in the movie-  it was just really well crafted piece of work
including the ending    ---------------
(Spoiler alert!!!!!!!!!)
Where for once the killer is just killed in the end and doesn't pop back up several times which has become so over used in  thrillers that it is actually more surprising now when the killer doesn't come back for one last gasp at the hero.   Then the romance part of the story has a satisfying end as well as our hero now relieved of his house arrest  crossing the rope to kiss the girl ---a scene that was foreshadowed beautifully earlier in the film in a scene where she teases him by walking past his boundary.

Email ThisBlogThis!Share to TwitterShare to FacebookShare to Pinterest
Labels: Disturbia