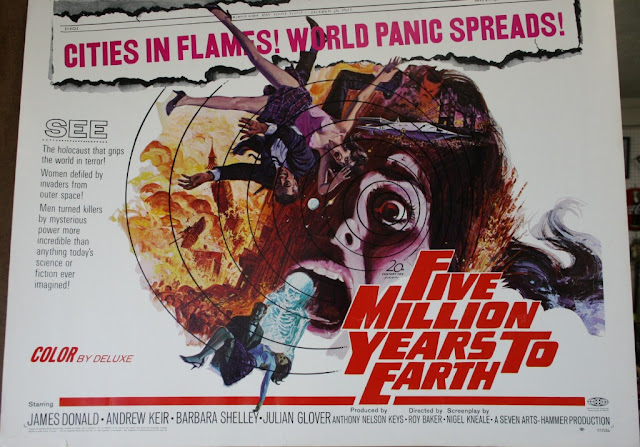 Five Million Years to Earth is a really interesting little sci-fi film that came from a BBC 6 part series orginally (which now I would very much like to see)   The first portion made me think fondly about   one of my favorite sci-fi books  Inherit the Stars by James P Hogan.    A scientific discovery is made while working on the extension of a subway train that leads to so much more.  The movie builds from this discovery into larger revelations that eventually like Inherit the Stars explain  human evolution.  This theme is also central to  Prometheus --which I will be seeing coincidentally later this week.  Even with the cheesy special effects of this Hammer film--it was still an effective thinking man's sci-fi movie---whose influence can be seen in the works of horror film makers that followed.

The movie takes place at a subway station at Hobb's End.....The entire time I was watching the movie that seemed so familiar....I had to look it up after the fact.  Look it up below and you can see how this influenced others as they paid homage to it in their films using the name in their stories.  John Carpenter made it the central town in his movie In the Mouth of Maddness which features an a famous horror author (modeled after Stephen King).   Several of King's works seem to have been influenced by this film's theme as well.

It is weird when you stumble across an older film like this and can immeadiately see how later works t were either consciously or subconsciously influenced by them.  Like the case with Equinox and the Evil Dead which I noticed when I saw that film.
http://bradgeekness.blogspot.com/2011/11/equinox-1971-so-bad-it-is-good-7-out-of.html

Posted by brad chowen at 5:21 PM No comments: 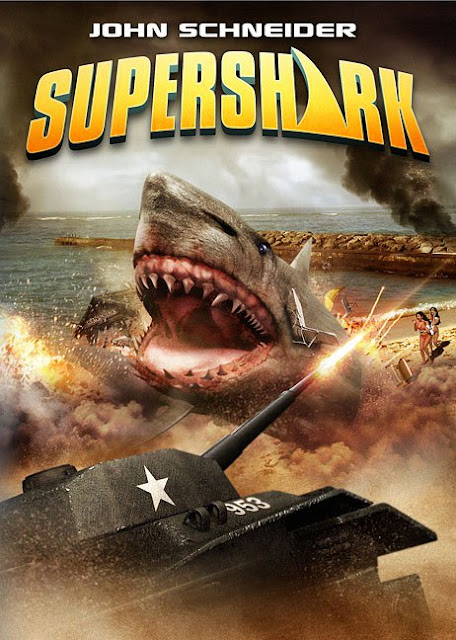 Yet another Shark movie???  Yes that is correct.  Another bad shark movie.....This one has J.J. Dynamite Walker and John Schneider of Dukes of Hazard fame and a giant digital shark that repeatedly launches itself on the same stretch of beach like a bad hand puppet chomping on people in a digital blur.  The plot of this bad shark movie isn't much to speak of.  You know the story....a oil rig opens up a underwater shaft and out comes a Giant digital shark that is a little hungry.  Then you get a bunch of dull dialogue and a lame bikini contest and J.J. Walker basically playing himself and more chomping and then the U.S. Military tries to take out the shark unsuccessfully.  Super Shark is a poor man's Mega Shark.....This is un example of a Giant Shark movie that has all of it's best moments in the trailer.  All in all Super Shark isn't that Super.

"Blow his ass up"

I guess the Sharks like their victims tanned orange.

Movie review will be up tomorrow night  June 10th 2012

Posted by brad chowen at 1:43 PM No comments: