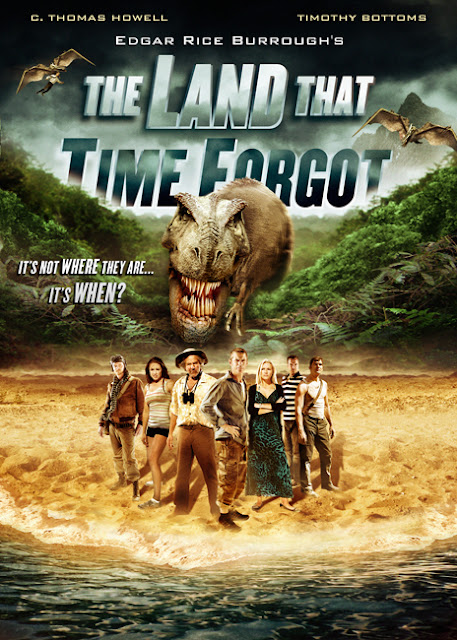 LOST with a Dinosaur.......It came out around the same time that  the big budget Will Ferrell Land of the Lost came out --plus the TV show LOST --about being stuck on a strange island was on ABC as well......(Asylum has a habit of doing that....just see Almighty Thor----I mean Don't see Almighty Thor it was terrible)..... My Almighty Thor Review is  here
http://bradgeekness.blogspot.com/search?q=almighty+thor

I hate that they are able to put the words Edgar Rice Burrough's The Land That Time Forgot  on the box because low budget movies like this and my previously reviewed  Jules Verne's  Mysterious Island really don't do those classic books justice.
(My Mysterious Island reivew is here)
http://bradgeekness.blogspot.com/2012/02/jules-vernes-mysterious-island-2012-0.html

Someone growing up today my be turned off from reading this classic books after watching these  cheap low budget versions of them with the names of such classic authors attached.  Edgar Rice Burrough's  deserves  versions like Disney's  Tarzan and John Carter rather than  films starring (C Thomas Howell).   That being said ---at least this  direct to DVD movie was watchable unlike the Mysterious Island film that was direct to Syfy earlier this year.    Sure it was low budget and they kept shooting scenes in the same 5 shot locations over and over again.....But for an Asylum movie this one was decent in all its cheesy glory.

Posted by brad chowen at 1:09 PM No comments:

Cabin in the Woods 9 out of 10: Welcome to the Whedonverse! 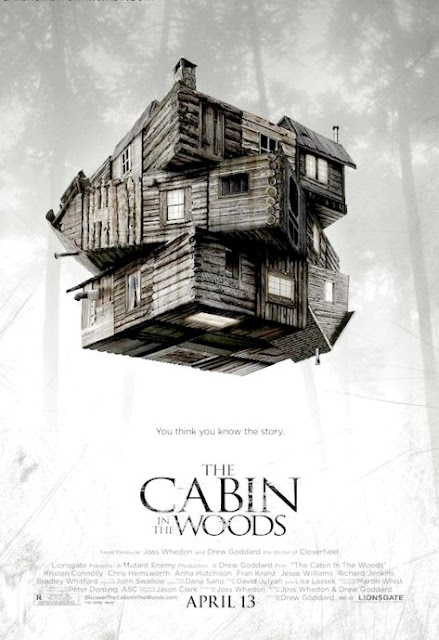 The Cabin in the Woods fits perfectly into the Whedonverse.    It skewers the horror genre and its conventions in  a clever and laugh filled fashion.  Like a really fun episode of Buffy or Angel that goes places that the show couldn’t.   It  plays with the classic horror movie genre with a mysterious   quality straight out of the movie The Cube….  but with Buffy style laughs.   It basically serves as a way of explaining all of the horror movies that we have seen over the years…..All of the unexplained decisions that the characters of those horror movies make.  It is like if the Scooby Gang went to a spooky cabin in the woods and left Scooby at home.   Shaggy is definitely there in the form of Fran Kranz (previously from the Dollhouse)  playing the geeky stoner  Marty.   As a fan of  Buffy and Angel I got exactly what I wanted out of this movie going experience.  It meet all of my expectations by creating creepy settings and scary moments and then having great moments of laughter and fun in place of scares.  It captured the horror that it is skewering and then cooked the kabobs and added a little extra sauce.

The big supposed twist of the movie is technically revealed in the first few minutes of the movie and that really doesn’t matter.   It isn’t a movie that solely relies on a twist at the end like the so-so films of  M Knight.   The twist  is just a fun original idea  that allows us to look at the horror genre in a different way.    The thing I like about Joss Whedon’s stuff is that he teases you and teases you and then pays it off in the end.   On Buffy there would be a season long arch ---a mystery behind the season that you would get a hint of –and then another hint and at the end of the season there would be a payoff and the story would move forward to something else.     Other shows like Twin Peaks ,  X-Files and LOST were masters of the tease (and great at times in their run)  but they all failed in the big payoff.   You need to eventually payoff the audience.   Whedon does and this movie does as well.   They could have easily ended the movie and left it open for dozens of sequels with different scenarios ---but instead the movie has a big payoff at the end.   And I appreciate it. 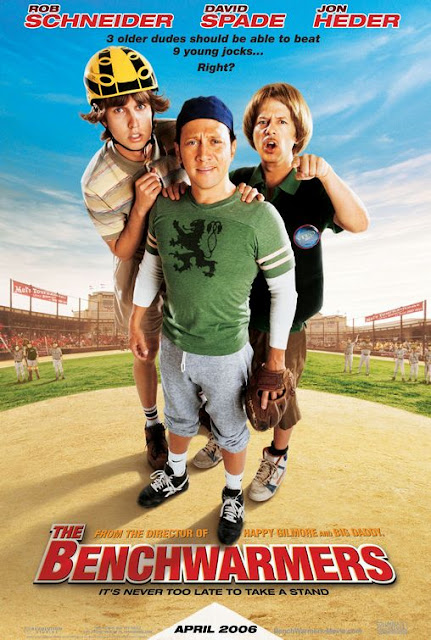 A movie with a message about anti-bullying starring  Rob Schneider??   The movie itself was just okay the message or heart of the movie was unexpected. Jon Heder---plays an adult nerd that still wears a helmet and for an acting choice he basically just plays the character like Napoleon Dynamite with a helmet  (what range).  David Spade is basically just nerdier version of his exact same character he always plays with a bad haircut and  Nick Swardson is basically wasted as  Spade's brother that is afraid of the sun.  They all play a bunch of losers that never got picked to play ball back in the day that stand up to a bunch of young bullies that are picking on a kid.  This brave action  and the help of another former nerd that is now a billionaire (Jon Lovitz) leads them to  band together to take on little league teams and get payback.   The  humor in the movie is pretty average---nothing special or exceptionally funny.  The message was actually pretty heartfelt one about anti-bullying which was a bit of a surprise coming from Deuce Bigalow and Joe Dirt.  Rob Scheider --who to me is usually a throw away character with a few funny moments in Adam Sandler movies actually does a pretty good job as the main character that isn't exactly what he seems.   That plot point was predictable-but worked well anyway.  All in all it was a so-so comedy that was only slightly more than I expected it to be.

Posted by brad chowen at 4:00 PM No comments: 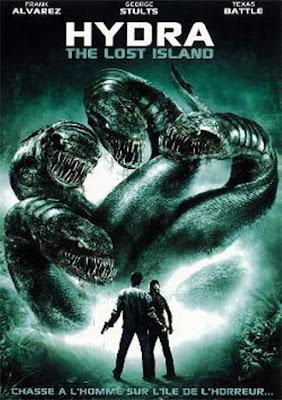 CGI Snake with multiple heads meets The Most Dangerous Game.   If you took the Most Dangerous Game genre  in which people hunt other people for sport   (Of which the popular Hunger Games is derivative) and stuck it on a mysterious island that just happens to have a mythical Hydra on it then you get Hydra: The Lost Island.   A sub par  CGI monster movie with really bad dialogue and acting and some typical creature munching.  4 People are released on an island as prey for some rich millionaires who they must flee from while a giant Hydra is loose.  They set up a few Rambo/Predator traps, but mainly just run around in the not too expensive forest talking in between Hydra kills.   People die....and our hero finds the sword of Hercules in some fake lava inside a cave to slay the beast.....(Spoiler Alert)  He doesn't kill it all the first time around just because someone decided they wanted the creature to get loose on the ship at the end.  There is nothing special about this typical low budget monster movie.

Posted by brad chowen at 2:19 PM No comments: