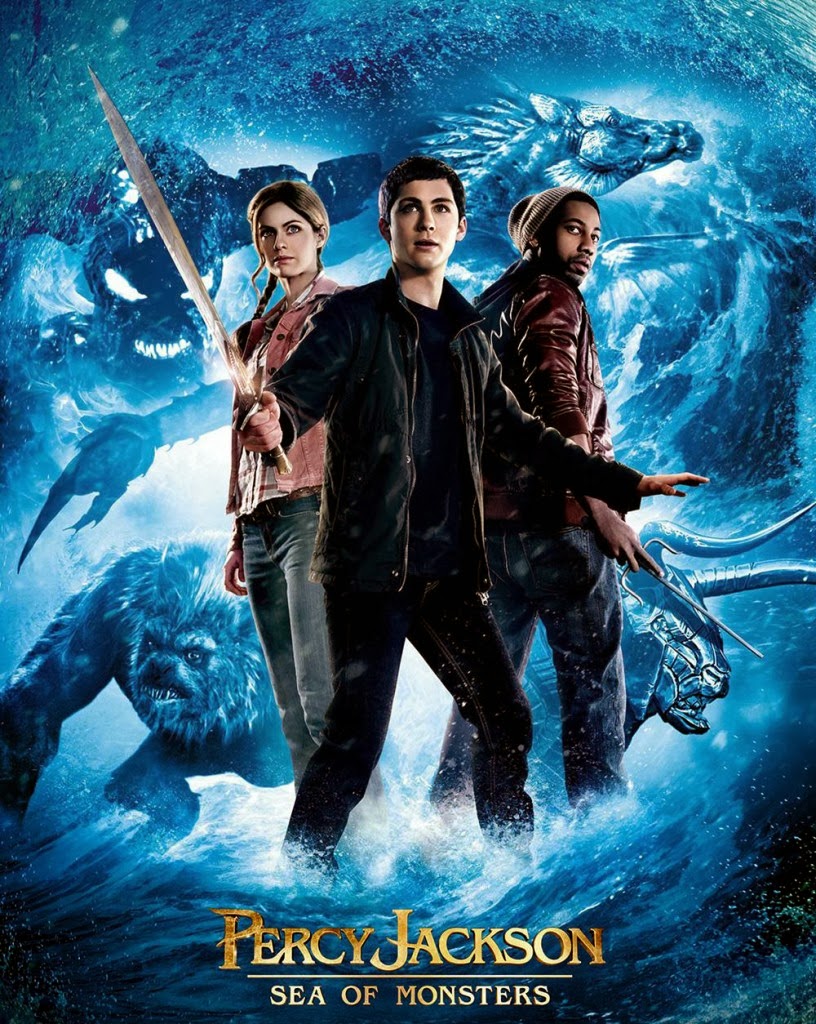 My quick thoughts on Percy Jackson and the Sea of Monsters
This sequel to the entertaining yet under performing Percy Jackson movie  series is an enjoyable action adventure comedy ride.
The studios really wanted this series to be the next Harry Potter, but unfortunately the box office fell way short of that goal.
Luckily it  did well enough to give us a sequel.

1.  The sequel has a light more comedic tone that felt closer to the Men in Black films.
2.   The story focuses on the training center for the young demi-gods being threatened as the magical barrier that protects it is in jeopardy.  Percy and his friends end up involved in an action packed quest for the Golden Fleece from Jason and the Argonauts fame in order to hopefully heal the barrier.

I feel both Percy Jackson movies succeed in reaching  the level of enjoyment  I got out of the Harry Potter movies.  I just wish they had caught on the same way –so that we would get to see the rest of the book series on the big screen--- which I fear we won’t get to.

For my thoughts on the first movie in the series go here
http://bradgeekness.blogspot.com/2012/09/percy-jackson-and-olympians-lightning.html

Email ThisBlogThis!Share to TwitterShare to FacebookShare to Pinterest
Labels: Greek Mythology, Percy Jackson and The Sea of Monsters 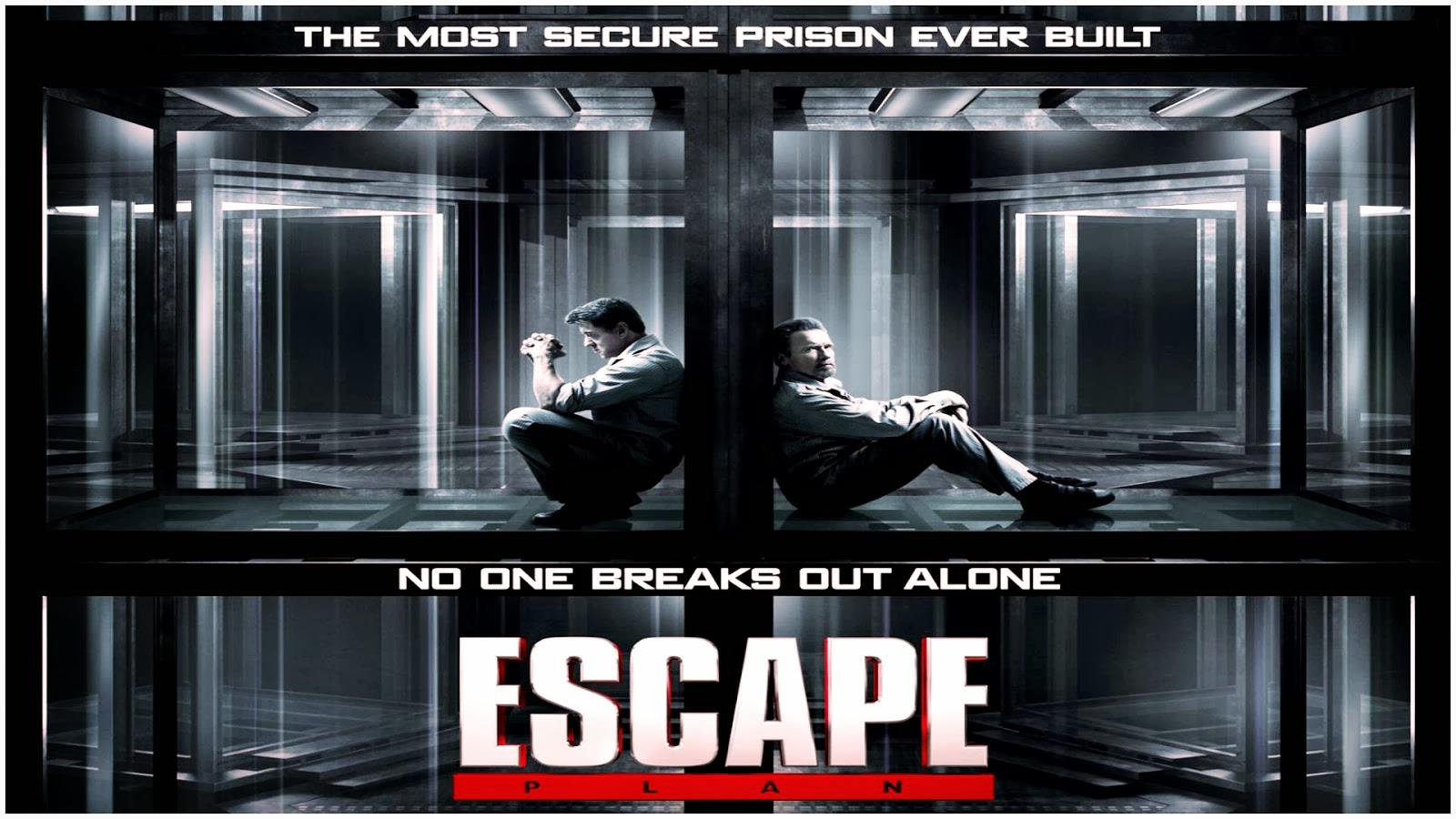 My quick thoughts on Escape Plan.
Can you imagine how big this movie would have been if it had been made 15 years ago?  It would have been one of the most anticipated movies of the year.   Now not so much.

1.  Despite their advanced age both Sly and Arnold both still have a presence on the big screen.

2. Although neither actor has ever really impressed with their acting ability, they both just have it.   What is it?   It is just an incredible  screen presence.   Since the death of the big overblown action films of  80’s and 90’s only the Rock has convincingly captured the same level of screen presence that Sly and Arnold have.

3.   It was great to see Sly and Arnold finally team up.   Arnold  of course had a cameo in the first Expendables and an expanded role in Expendables 2  which was great.  The Escape Plan really is the first film to really put Arnold and Sly on equal footing.

4    The movie itself was pretty good, but could have been better.  The pacing of the film which centers on Sky’s character going into a super secure prison and then having to break out was a little slow at times.   The character had to spend much of the movie planning his escape which takes place at the end of the film,  so it wasn’t as action packed as you would hoped an Arnold and Sly film would be.  Still it was enjoyable to watch.  The movie definitely has moments though and gives nostalgic action movies fans a look at what an early team up of these two action legends might have been.   Arnold and Sly still kick butt and if you enjoyed the the Expendable movies you will probably like this as well --even if it is on a smaller scale than those fun flicks. 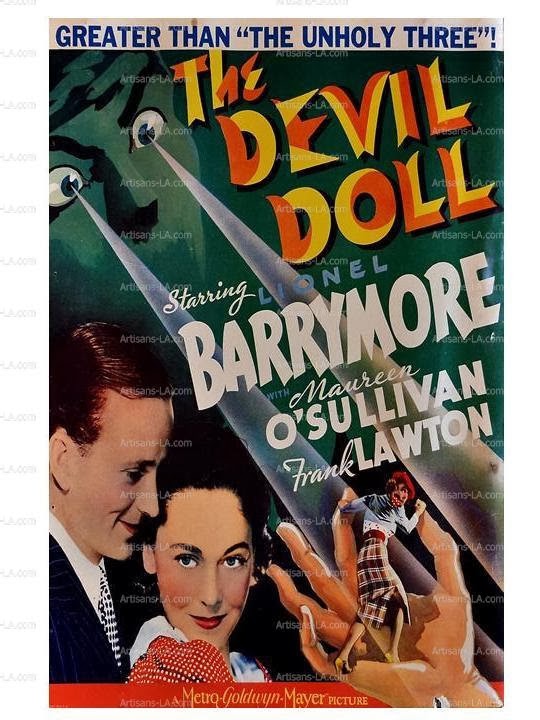 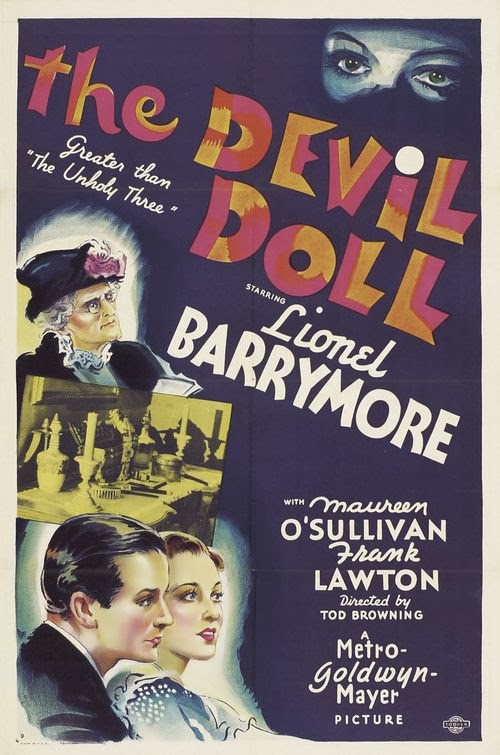 The movie has an interesting concept doesn't deliver on its potential.   An escaped convict that was wrongly imprisoned for robbery and murder escapes from prison with a mad scientist.     He learns the secrets to shrinking humans and then being able to control their minds from the scientist.  The scientist passes away during one of his experiments and the main character uses this knowledge to get revenge on those that framed him.  Lionel Barrymore stars in this odd film in which he spends much of the movie in drag posing as an old lady.  The problem is his old lady just seemed like an uninteresting version of the old ladies from some Monty Python sketch.  His revenge plot was kind of boring as he using the doll sized  minions to get his revenge.  I felt like it was  a waste of a cool and interesting story concept in its lackluster execution.  The best moments are early on when scientist shows him how he has shrunken some dogs.

The movie is directed by Tod Browning of Freaks fame.

Posted by brad chowen at 4:08 PM No comments: 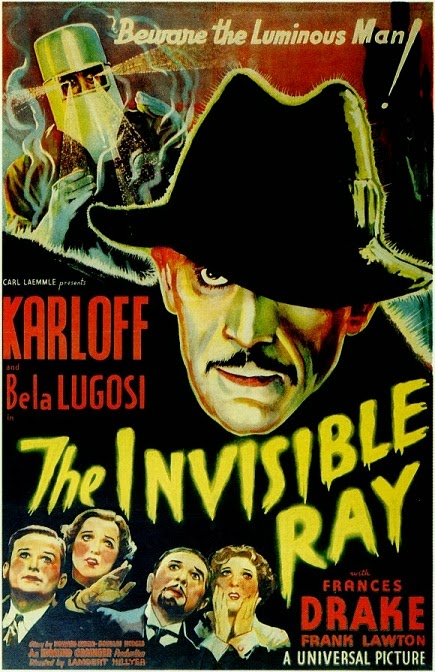 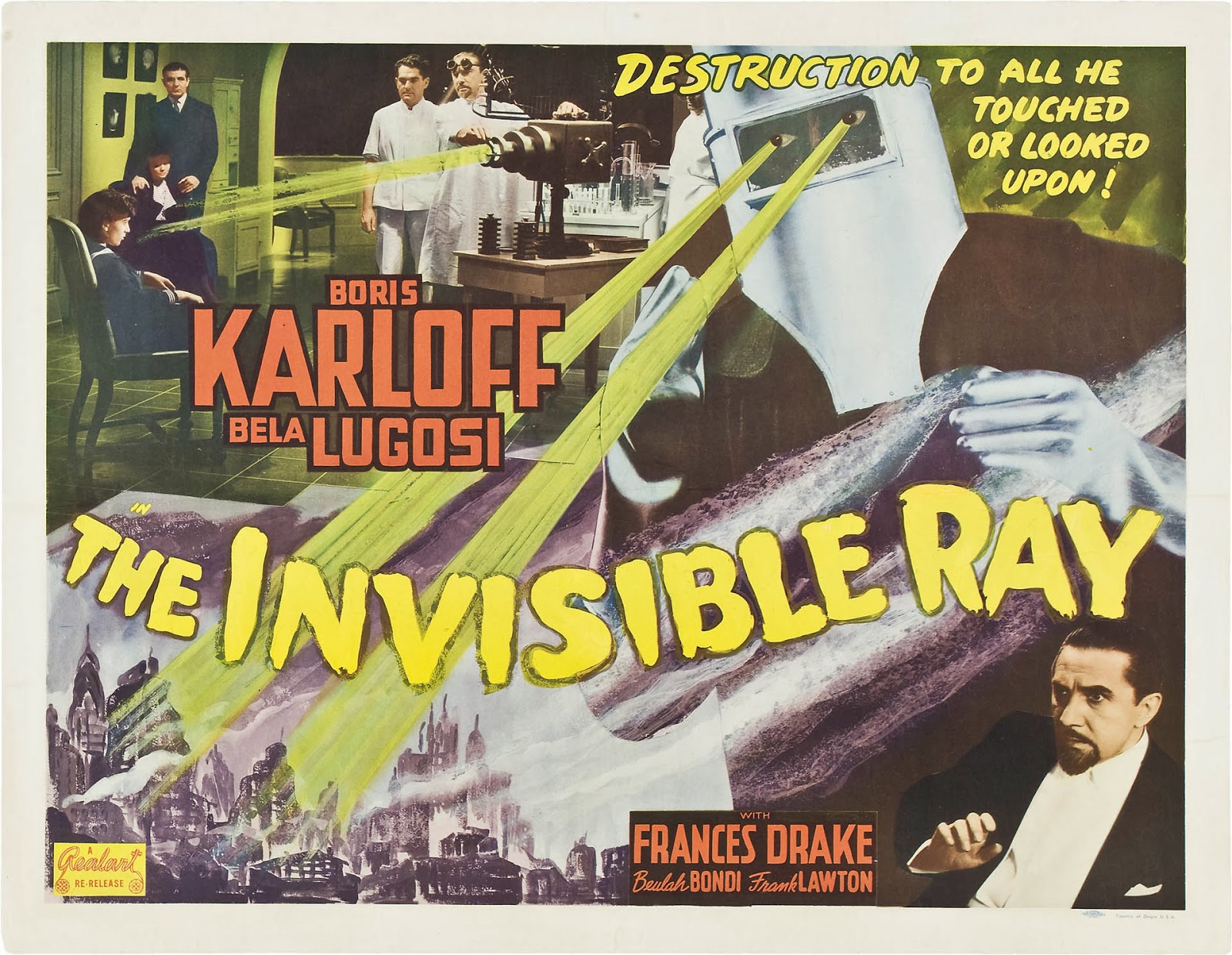 Karloff and Lugosi...... Sound like a winning formula. Well not in this very dull horror movie.  A scientist played by Karloff turns into a glowing murder after being exposed to some radiation as a result of his discovery of a new element.  That is pretty sums up the whole movie.  It was a revenge tale that never really held my interest or attention.  A waste of the talents of these two horror legends.  The story just dragged...and dragged with nothing interesting happening other than Karloff's hand glowing before he killed off the people he felt had wronged him.

Enjoy the trailer....skip the movie

Posted by brad chowen at 3:50 PM No comments:

To Hear our Podcast about this gem go here.

For my Review --see below

This is the 2nd movie from the100 Greatest Sci-Fi Classics (NOT SO MUCH) DVD set--that I'm slowly attempting to work my way through.

The movie starts out a little slow - but then gets better and better (or is it worse and worse) as it goes along.  It becomes a non-stop mess of pointless enjoyable cheesiness.

The Plot:       The plot of this movie is a complete after thought.   It seems like somebody was putting together a stunt show of a bunch of stunts they thought would be fun to see and then tried to piece together a story around those stunts after the fact.   It follows the story (with a complete lack of continuity) of a team of scientists that are trying to raise a nuclear sub from the ocean floor --that somehow causes Atlantis to resurface.  The small group of survivors team up with a couple of Vietnam vets that were out on a boat near the scientific platform when Atlantis resurfaces.   They end up making their way to an  Caribbean island that has been taken over by a cheesy  Mad Max wannabe biker gang. The biker gang is  led by some guy wearing a plastic Crystal Skull mask.  The biker gang is what is left of the devolved Atlanean race.
A bunch of punk rockers that look like they washed onshore from a casting call from The Warriors.  They ride around on motorcycles that look like they were stolen from Pee Wee Herman if he had a pimp my ride bike shop.   At this point any attempt to follow the piece meal plotis pointless....but it doesn't matter.   Plot who needs a plot.  There are references in the movie about scenes that were obviously cut.  Other scenes have been left in that seem to be a part of a different storyline that was maybe abandoned.   Characters show up out of nowhere and it goes from night to day at random.  It is a total mess.

The Action:          The action was great....If you like the Universal Studios   Wild West Stunt show or Riot act of Waterworld stunt shows.   Once the movie gets past its slow introduction and we get to the world's lamest biker gang section the movie becomes a non-stop series of non-connected and pointless action scenes.   Every stunt show trick in the book is used.   Scenes from countless other movies are lovingly ripped off to the enjoyment of the audience.   There is a pointless tour bus scene with guys jumping on top of the vehicle from a helicopter to then easily be knocked off that is a tribute to Raiders of the Lost Ark.  There are scenes near the end when they make their way to Atlantis (which seems to be an island like LOST)  where some guys are shooting at them from the top of a cliff over water,  just so they can fall off the cliff (as a cool stunt once shot).

The Acting:      What do you think???  It was totally cheesy.
The lead actor is just too old for this sh..  Some of the characters have dubbed American voices since it was made out of the country.   One character that they randomly meet halfway through the movie is supposed to be a fake Arnold which was kind of funny.   There are some  classic bad movie lines in this movie.

Indy Clone and Indy inspiration:
Indiana Jones and Kingdom of the Crystal Skull lifted a line directly from this movie at one point.   The line is delivered while one of the scientist is being used by the Atlantis ancestors in some chamber that looks like a MTV video to bring them back somehow.   She says " I want to know.....I want to learn"   the line used  at the end of Indy 4 by the Russian.  All of  the Indy movies were basically homages to the B Serials---I thought it was interesting that they also borrowed from this  Indy/Action movie rip-off as well.....This movie had an action scene that was obviously inspired by Raiders of the Lost Ark.  The title of this movie was an obvious attempt to cash in on Indy with Raiders in its title..  So it is funny that Kingdom of the Crystal Skull borrowed many elements from this movie.    I guess things come full circle.

Enjoy the trailer and seek out this  "Movie"  (Stunt show) for a fun bad movie night party.....


Our Facebook page is here....Tune in soon for the 3rd movie from this DVD set.   Next up I'll be watching Future Woman from 1969