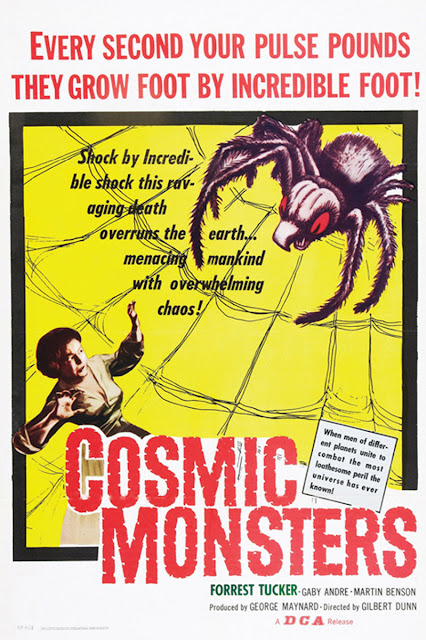 The tagline for this movie in trailer reads " Every Second your pulse pounds they grow foot by incredible foot!"    What a laugh my pulse didn't pound at all during this boring monster movie.  I watched this flick on TCM with an introduction by Dennis Miller which was better than the movie itself.
A Scientist is working on some magnetic experiments.
The government is interested in the military use of the experiments and there is a guy from outer space that has come to put a stop to it. The movie is basically just a bunch of science talk and not much actually happening.   It is like a really bad episode of Star Trek where they spend the entire episode talking about how to solve a problem.  The experiments cause a vagrant to become a killer and insects to start growing.   The movie takes over an hour to get to the giant insects and when we get to them it is basically just close-ups of actual insects mixed with shots of soldiers firing into the forest.  The insects are placed in front of pictures of the forest to make it seem like they are in the same movie.

The best thing about this monster movie is the poster.
Watch the trailer and skip the film. 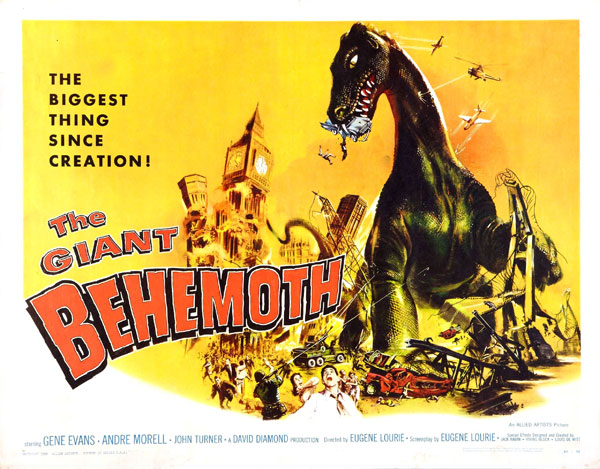 The oceans ecosystem has changed and a giant prehistoric beast has been awakened.   The first 40 minutes of this monster movie is pretty dull.  We get scenes with scientists talking dramatically with dramatic music meant to pump up the tension that doesn't fit what is on screen.  We only get glimpses of a beast from a far like the Lock Ness Monster and some people dying of radiation.  Then it is back to the lab for more science talk and to look at dead fish.  I was starting to lose interest and then finally a giant Kong/Godzilla sized footprint is found in a small English town that has been destroyed by the beast.   We call in a wacky scientist that looks like Gomez Addams that is excited about it.  The boring first portion of the movie finally is worth getting past if you are a fan of the old school Stop Motion monsters attacking cities movies. 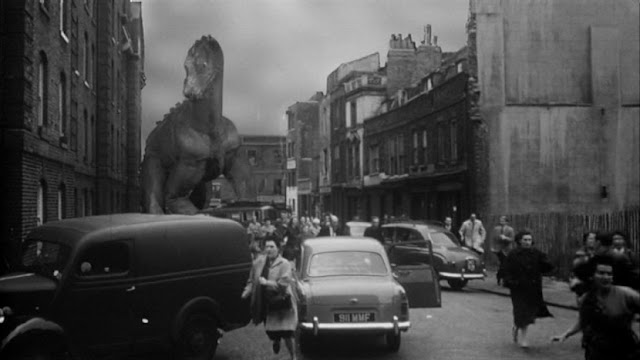 The Behemoth finally shows up in London where we actually get some decent footage of panicked Brits running away and then cuts to a giant clayish looking Dinosaur destroying things.   This is what giant monster movies back in 1959 looked like folks,  before Jurassic Park changed movies forever with a leap in special effects.  I don't mind the effects which by today's standards look cheesy.  I actually enjoy the old Harryhausen looking beasts.   This is a much better film than that terrible sea snail that attacked the world crap I saw last week.    I get a kick out of a scene of people running on a ship that the beast is attacking and then the film cutting to a Stop Motion Dino attacking a model ship with no one on it.   The last 25 minutes of the film was fun.   Unfortunately the film wasted way too much time getting to the fun.  I give it a 6 out of 10 because despite the slow start it eventually got enjoyable watching the beast stomp through models while people ran for their lives on completely different sets.

Posted by brad chowen at 6:51 PM No comments: 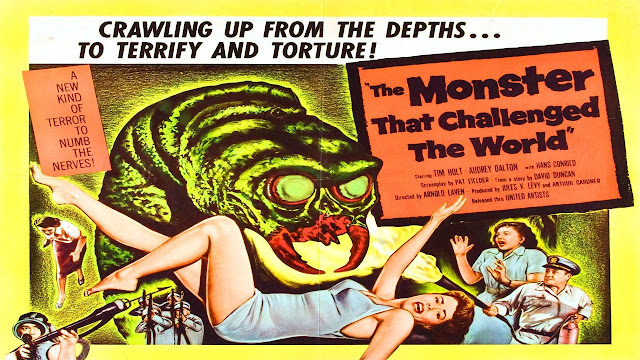 Ughhhh! This bad monster movie was really, really terrible.  The Monster that Challenged the World....(More like the Monster that bored the audience).   I recorded this based on the cool silly posters and the title.  Maybe if I had read about the Giant Prehistoric Sea Snails --I would have skipped it.  But I didn't skip it,  Instead I suffered through this terrible giant monster movie that featured one of the worst movie monsters ever put on screen.    This Giant Sea Snail isn't scaring anyone.  The movie basically was a whole bunch of talk about and searching for the monster.   The screen time of this ridiculous  sea snail creature was minimal at best.    The trailer shows a Giant Sea Snail attacking a town Godzilla style.   I guess they forgot to add that scene to the actual movie.

I say skip this turd of a monster movie.  The best thing about this movie is the old school movie posters.  Look at the posters and watch the trailer and just save yourself the time by skipping the film. 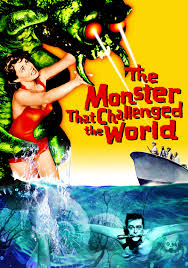 Here is a picture from online of the chesseball monster 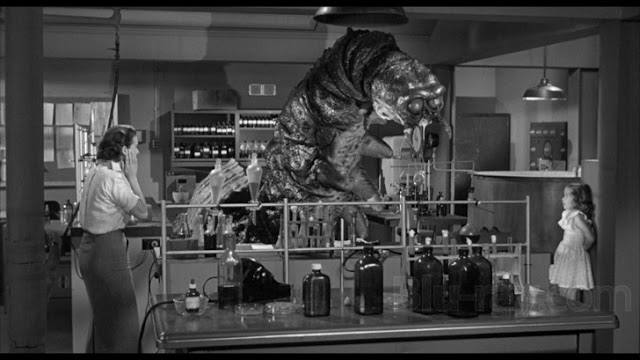 Here is the misleading trailer 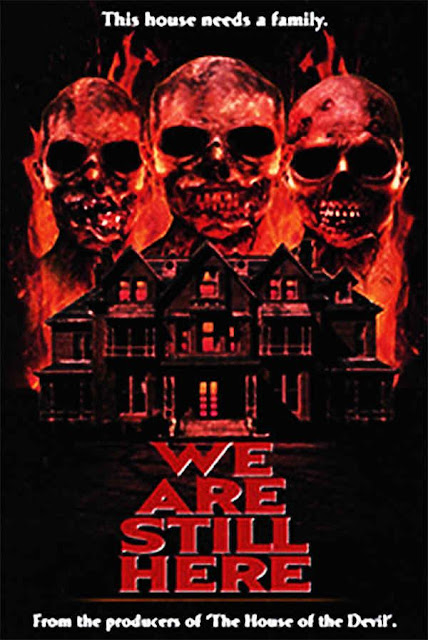 A couple move to a quiet town after the death of their teenage son to start a new life.  Unfortunately for them they picked the wrong house.   Apparently the house they moved into awakens about every 30 years and demands blood as revenge for an old town secret.

This movie has 1970's feel to it.   It stars a couple of names I recall from the past like Barbara Crampton (who once once a B-Movie actress in horror and Sci-fi films) and Lisa Marie  (Tim Burton's Ex).   As the film starts I could almost imagine that it might be a secret sequel to Troll 2-- but Nilbog wasn't the name of the town.   It was a decent low budget horror film as the dumb white people stay in the house even after being warned by one of the townsfolk to get out (White people never listen)  They invite some friends that can communicate with spirits because the mom senses her dead sons presence in the house.   Their friends show up and after diner in the strange town where all the townsfolk basically stare at them they spend the night .  Her psychic friend tells them that everything about the house is dark yet they hang around anyway.  Then her boyfriend  ( Who look like a Jack Nicholson impersonator)  does a seance when the girls go into town the next day awakening the evil within the house.    The true evil appears to be the townsfolk themselves and the dirty little secret they have (which isn't being Goblins with bad makeup).

Well the house wakes up every 30 years for payback and this time around it gets it when the townsfolk descend on the house to make sure the couple is sacrificed --but things don't turn out as they town plans and we actually get some decent gory carnage.  It wasn't a great horror film ---but I liked the retro vibe of the film and the gory blood filled conclusion.     If you like evil house out for revenge flicks this one may be worth your time

Email ThisBlogThis!Share to TwitterShare to FacebookShare to Pinterest
Labels: Horror movie, We Are Still Here

The Super, Fantastic, Terrific Podcast #24 In this Podcast we discuss Bone Tomahawk from 2015, Kurt Russell and more

In our latest Podcast we discuss the low budget brutal Western called Bone Tomahawk starring Badass Kurt Russell,  Patrick Wilson and Matthew Fox.
We dig into this brutal Western that may not be for the faint of heart with special guest Scott Cole.

We also briefly discuss Logan (that Russell saw),  Life (which Andy destroyed).   We also talk about the most overrated movie you have seen lately.....

Check out the PODCAST here
http://www.superfantasticterrific.com/super-fantastic-terrific-show-24-bone-tomahawk/ 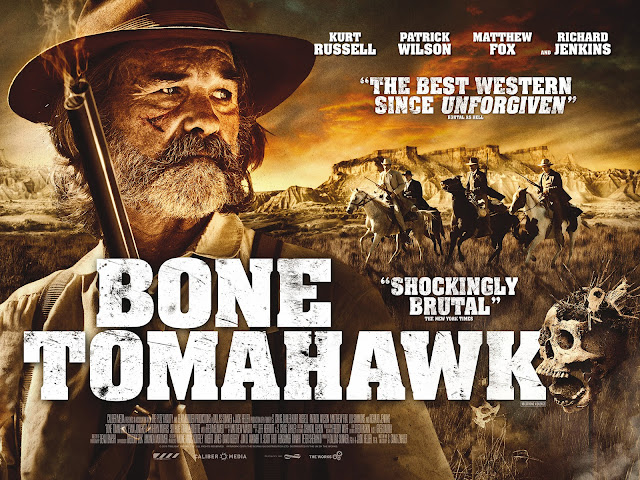 
I enjoyed this Western.  It starts out slow --but features a great cast and great dialogue.  This isn't your average Western.  After a man's wife is kidnapped in an old western town 4 men set out to rescue her from a group of cannibalistic indians.  The movie slowly ramps up as they make their way across the desert.  The ending is just exactly as the ad suggests......."Shockingly Brutal".     Check out this film especially if you are a Kurt Russell......and definitely listen to our Podcast 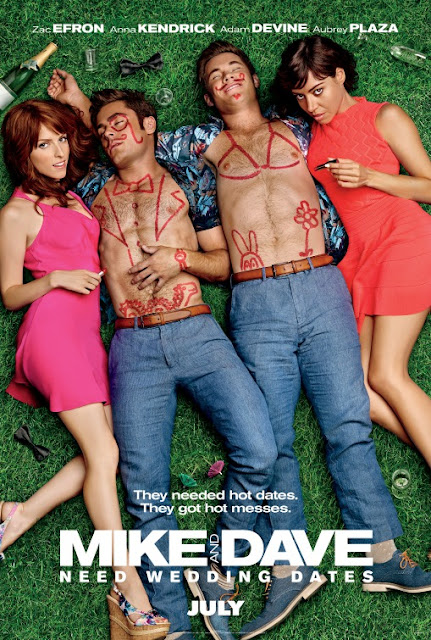 I wasn't expecting much from this movie when the trailer first came out, but still wanted to see it.   So many recent comedy movies have let me down, but I actually found myself laughing at some of the stupidity in this comedy.

The film stars Adam Devine (Andy on 3 seasons of Modern Family) and Zac Efron (from some Ab factory that my wife approves of).  They play two brothers that are liquor distributors that are all about the partying.   Their little sister is getting married and their Dad (played by the always great Stephen Root --the boss from News Radio)  lays down the law and tells these two hard partying idiots to get their shit together.   So the two brothers must show up to their sister's Hawaiian with actual respectable dates to avoid ruining yet another family gathering.

The setup for the film is good.  The two idiot brothers take to social media to find their dates (not a bright idea).  The results are predictable.    Watching them interview girls that answer their ad for a free trip to Hawaii was entertaining.   At this point I realized I was going to enjoy this film more than I originally thought.    Then Aubrey Plaza and Anna Kendrick show up posing as respectable girls --when in truth they are even more of a train wreck than the brothers.

The humor is crude and the language is very adult --but I still found the film fun.  There are numerous humorous segments and a lot of decent laughs.   This isn't an intelligent film....  The main characters basically have the intelligence level of movies like  Stepbrothers or A Night at the Roxbury and Dumb and Dumber.    I briefly took a look at the reviews on IMDB before writing about the movie and was shocked at how much pretty much 90% of the reviewer absolutely hated it.    If you like dumb humor give it a shot if you don't like your main characters to be morons ---you may want to pass on it.