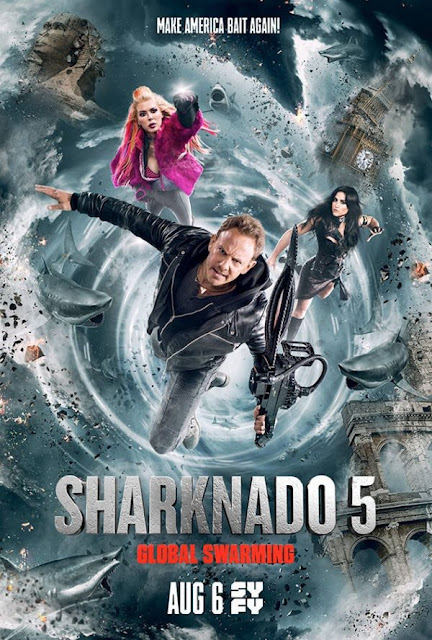 It started as a simple movie about a Tornado filled with Sharks. The original was SO Terrible that it was GREAT.   It caused a phenomena and launched a franchise.    Ian Ziering probably took the original Sharknado as much needed paycheck,  little did he know that a few years later he would be the star of a franchise that would be on it's fifth movie with an ending that sets up a 6th film.

Sharknado 5 tries to take the simple concept of the original film and turn it into something much bigger.  This fifth installment tries to establish a mythology behind the Sharknados.  Until this film the Sharknados were just some weird random events (as far as we knew).  Sharknado 5 establishes a mythic back story that ties the Sharknados back to the time of the Droids and Egyptians?

This installment falls into the same trap as the less than stellar second movie where there are so many cheesy cameos that it distracts from the movie itself.  I spent more of the movie trying to figure out who the people with the bad plastic surgery were as the "celebrity" cameos rolled by.   Fabio as the Pope??  Charo the Queen of England??  Greg Louganis as a part of some evil organization that is trying to get the Shark stone that was discovered at the beginning of the film in a parody of some scenes from Indiana Jones.  This movie is a series of bad puns.  "Sharks,  why does it have to always be Sharks?"  Ok so I laughed a little (Big Indy Fan).   No longer a simple shark/tornado movie it is now part spy film with secret organizations.

The main plotline involves Finn's son being swept away in one of the Sharknados.  Finn(Ian Ziering)  and his now half robot wife (Tara Reid) spend most of the movie Jumping the Sharknado  or into the Sharknado trying to rescue their son.  The Sharknado opens some type of wormhole that dumps them in different spots all over the world.  It makes the previous films seem somewhat sane with the level of absurdity.    The third act of the film gets depressing as all of Finn's loved ones die.   The movie ends with Finn wandering around a post apocalyptic world looking for survivors.  Then all of a sudden Dolph Lundgren shows up and says that he is Finn's son. The film ends as a parody of Back to the Future with Dolph Lundgren getting Finn to get into his truck which is actually a time machine to go back and try and rescue everyone.   I thought the ending was funny, but this Sharknado effort did more than just jump the Shark it rode the shark down a staircase while punching it.
Of course I'll be there for Sharknado 6.  I have to find out what all this Dolph Lundgren time travel stuff is all about. 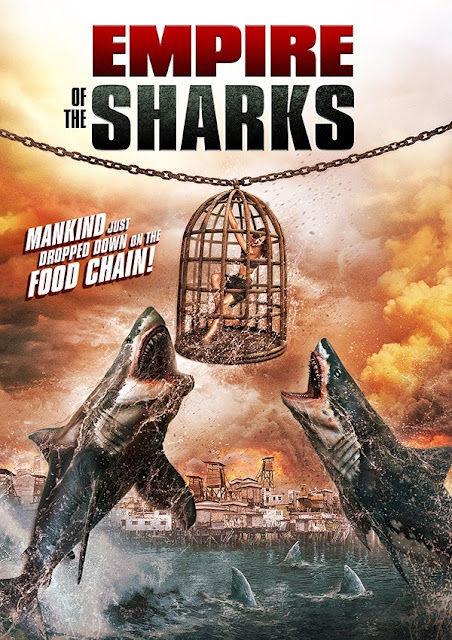 Apparently Asylum had some leftover pontoon sets from the lackluster Bad Shark movie Planet of the Sharks from 2016--so they decided to make another Water World Shark movie rip-off.
Is this now and official sub-genre of shark film?

The movie takes place on an earth where over 98% of the planet is covered in water.   An evil Warlord controls the seas with an army of sharks that can be controlled by some virtual reality gloves. Think of him as a Negan with sharks.   One of the tiny little make shift floating cities fails to give proper tribute to Hooper (you wait this isn't a Bug's Life ) and so the warlord takes some of the people as collateral.

A guy from the village sets out to rescue the girl he promised to look after named Willow (that apparently has a special amulet and the ability to communicate with and control the sharks.  The hero character bands together a ragtag group to help save he girl and the film ends up as a battle between the warlord that looks like it could be Don Henley's cousin and he Willow with the mystical shark powers.

The movie is of course low budget and kind of chessy just like Planet of the Sharks from last year.  I hope this WaterWorld shark genre is not here to stay---but the budget for these films feels like something out of the Beastmaster TV series.

3 bad sharks moviess down...3 More to go.    I'll have a Shark minute segment on our next Podcast to quickly review all 6.   I think I'll go with Sharknado 5 tonight in hopes of some enojoyment that has been lacking in the last 3 films.

This is a watch the trailer and skip it movie ---unless like me you need to see all bad shark movies looking for the SO GOOD IT IS GOOD one.

Posted by brad chowen at 7:56 AM No comments: 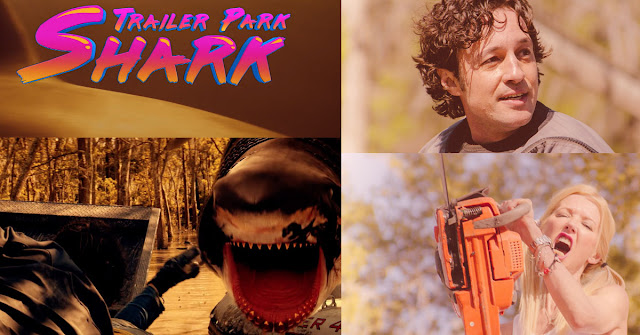 Have you ever wondered what happened Mr Belding from Saved By the Bell???  Or Thomas Ian Nichols from American Pie

Well Mr. Belding got old and fat and became a greedy Boss Hog type delevoper  and Thomas Ian Nichols is living in a trailer park as a part shark movie.  The developer characters greed leads him to hire some thugs to blow up the levee in order wash out a local trailer park. The levee blows and drowns the trailer park, but in the process also electrifies a killer shark and unleashes him on the white trash rednecks. Fellow American Pie Alum Tara Reid also makes a cameo.

This movie had some potential at the beginning.  There is a cool one shot of the trailer park near the beginning where the camera travels through the trailer park showing all the wacky inhabitants fighting and arguing in true white trash redneck style.  I wish they had just had the cast of My Name is Earl in this story.  This scene was so good that it gave me high hopes for the film that it never reached.  I could imagine a funny trailer park movie based on this cool opening scene that doesn't even involve a shark.

Rednecks are the last group that we are still allowed to make fun of in this politically correct world.  I give the film some points for finding a new and interesting setting for a shark movie and shark movie plot. Trapping the sharks victims on top of trailers from a drowned trailer park with the added element of some villains on jet skis Water World style terrorizing the survivors.

The problem with the movie is it's small budget.  The electrified CGI shark is cheesy.  The action is at times underwhelming like watching Thomas Ian Nicols character making a make shift paddle out of his hand using duck tape (a hand paddle that disappears without explanation later in the film).   The film features a decent showdown with Mr Belding at the end who is cruising around on one of those old school swamp boats with the giant fans.

The best scene of the movie is when one of the rednecks gets pulled into the water by the shark and ends up skiing behind the shark barefoot style.

I was going to rate this a 5 out of 10,  but while writing this review decided that despite it being less exciting than I it could have been I need to give it some credit for its new  original take on a killer shark movie--when so many other movies just copy the same general "Jaws Scenario" plot lines. 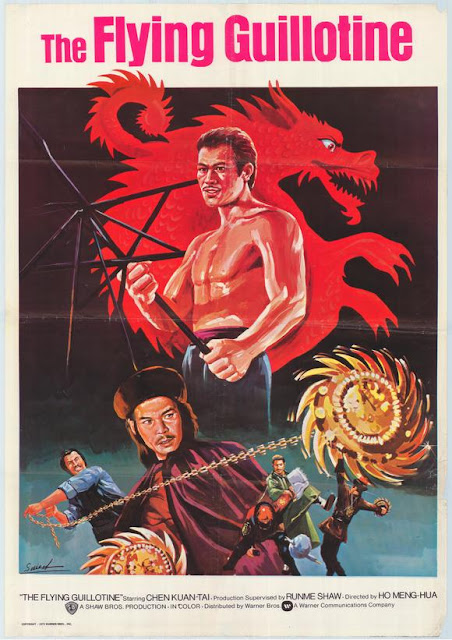 The El Rey Network does a great job of advertising these old kung fu movies. The trailer for this film pulls you in.    A Kung fu movie where a flying guillotine weapon that looks like a metal hat box on a chain beheads people.  Exciting stuff.

The Emperor is paranoid and so commissions a new weapon to take out his enemies.  The movie takes awhile to get to the action as the story shows the invention of the killing weapon and training.     The flying guillotine is a cool idea—but like so many kung fu movies the story is just all over the place and unfocused.   The story then drifts to one of the guards trained to use the weapon running away and trying to reestablish a new life.  Of course he is hunted down by his former guards and must battle to survive.

The Kung Fu action is decent, but nothing incredible.  I can’t say that the movie lived up to the promise of the trailer.  The plot just wasn't interesting enough to hold my attention.  Apparently the sequels have more humor which this first film is lacking,  so its sequel may be worth a watch.

Posted by brad chowen at 9:08 AM No comments: 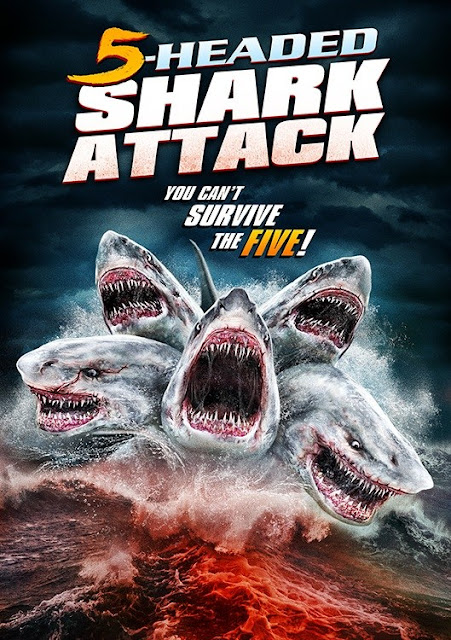 Apparently 5 heads are not better than 3.   I'm never been so bored by a 4 Headed shark in my life.   At least 3 Headed Shark Attack had some funny scenes that made it at least somewhat enjoyable.   This movie gave me nothing---other than the standard "Jaws Scenario" scene --where they think the shark is dead -but it really isn't so they open the beaches back up again.   I'll try something different with this bad shark movie review and just ask some questions.

1.  Why does a movie called 5-Headed Shark Attack feature a shark with 4 heads??
Part way through the movie the sharks tail becomes another head for no explainable reason.  So technically it has 5 heads at about the half-way point of the movie.

2.   Why do they decide to hunt the 5-Headed Shark in a rinky dink fishing boat?
I guess they couldn't afford a bigger boat in the production budget.

3.  Why have none of the actors in this movie ever taken an acting class in their careers?
Who needs actors when you have a title like 5 Headed Shark Attack.  The acting is almost as bad as the screenplay they had to read.  I felt like they were holding up cue cards for the actors to read from.

4.   Once this 5-Headed Shark has already killed over a couple dozen people  why don't they call in the military for help in killing the creature?
Because 2 cops and a couple of research students from the Aquarium should be more than enough to take on a 5 Headed Mutant Shark.

Up next more Shark Action as 5 More Bad Shark movies hit Syfy this week as it leads up to Sharknado 5.

Posted by brad chowen at 7:52 PM No comments: