Season 2 of Stranger Things dips again into that 1980’s Nostalgia.   I refer to it as The Goonies and ET with a mix of Stephen King.   I just finished up with the Season the other night and felt that it was a satisfying second season – but not an amazing second season. I’ve avoided articles and reviews to skip spoilers, so this is my opinions
To mix things up and do something a little different I thought I’d do my quick little review in the form of asking questions.

Question 1.   Could Steven from Stranger Things be Negan from the Walking Dead and the Upside Down be responsible for the Zombie Virus? 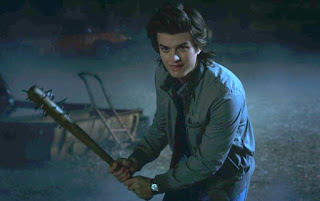 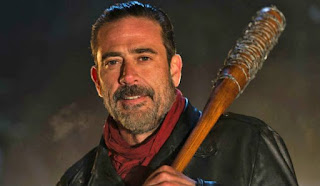 Probably not –but I couldn’t resist with the whole bat thing.   Steven’s character has continued his turn from heel at the beginning of Season One to Han Solo like hero in Season 2.

Question 2.    Why does Eleven turn to the Darkside so easily?
Eleven is way to eager to turn to the dark side when she meets her “sister”  Number 8.  I get that she is on a journey of discovery –but her turn to willingly using her power for evil was disturbing and then she turned good again just as quickly and Batman forgave Superman for having a mom with the same name.

Question 3.   What is your favorite 80’s movie reference either intentional or non-intentional?

My personal favorite was the will they won’t they scene between Mike’s Sister and Will’s Brother.   It was clearly designed to mimic the scene between Indiana Jones and Willie Scott in Temple of Doom.  “I’m a conceited ape” I also felt like the gang that 8 runs around with reminded me of the punk rockers from Return of the Living Dead.  Of course, it still very much had the look and feel of Goonies and ET with a little Gremlins thrown in with the Dart character.  The scene where Dustin finds they discarded skin from when the creature grew was straight out of Gremlins once the little bastards hatched

Question 4.   What was your favorite 80’s song used in the film?

The series starts off with a Devo and Oingo Boingo reference---it was like it was selected specifically for me.     My friend pointed out that he thought it was too lazy of the show to select popular hits like Whip It from Devo.   The should have dug a little deeper and found less common songs.   I sort of agree to a degree –but then they dropped an Oliva Newton John song “Twist of Fate” in at the dance sequence in the last episode which was great.

Question 5.  What did you think of the monster? 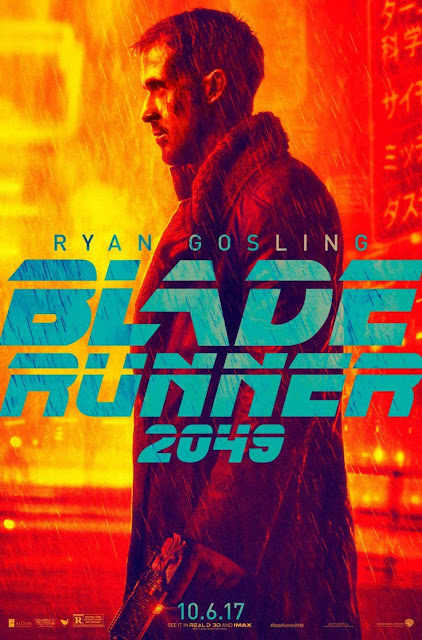 Now that is how you do a sequel to a 35 year old sci-fi movie.   If you listen to our podcast you will know by now that I’m not a big fan of Reboots and Remakes I general (there is an exception to every generalization).     I am however a fan of a sequel that builds on a pays tribute to the original film.   I loved both The Force Awakens and Tron Legacy –because they expanded on the previous films –while introducing new characters into the story as well.    In my opinion Bladerunner 2049 succeeds in doing this as well.  If you are a fan of the original Bladerunner than you are more likely to enjoy this sequel as well.   It definitely feels like an extension of the universe created in the first film.

The sets in this film are amazing.   Every set piece is like a work of art.  The visuals and music set the mood that puts you right back into the Bladerunner world.  This picture takes place about 30 years after the original and features a Replicant named K (played by Ryan Gosling)  that is tasked to hunt down older model Replicants.  On one of his missions he stumbles upon a mystery that leads him down a dangerous rabbit hole.  Like the original this film is sci-fi noir set amongst the rainy underworld that is Los Angeles in the future.   The film seamlessly blends into what you would expect the extension of the Bladerunner world would look and feel like.   The story consists of a satisfying mystery that ties in with the events of the first film that eventually leads the Bladerunner to find Deckard (played by Harrison Ford).   Of course this happens late in the films 2 hours and 45 minute running time.   My only complaint that I wish we had more time with Harrison’s character.

Bladerunner 2049 is not for everyone.   Like the original it is a science fiction mystery story.  It isn’t an action adventure film with big explosions ---but instead a slow thought provoking