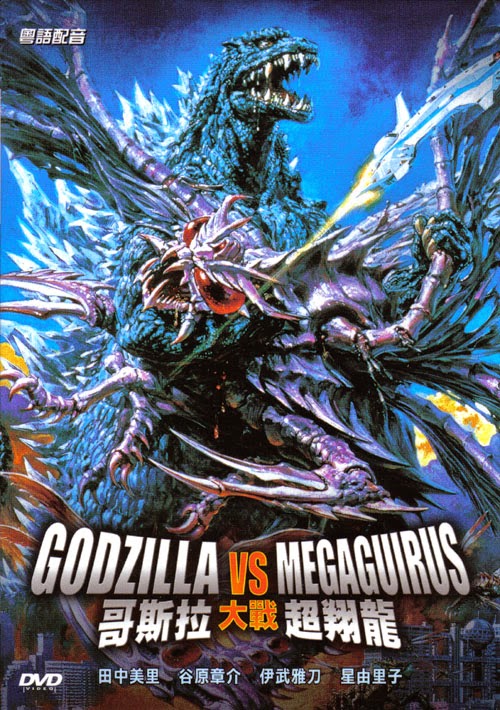 Godzilla is back and he is hungry for Nuclear energy.   Some Japanese scientist think that it is a good idea to create a weapon that makes black holes to defeat Godzilla (Not a good idea) .  They try and use the black hole weapon on Godzilla but all they accomplish is opening a pathway for some flying dragonfly creature to deposit and egg.  The egg opens and releases a monster that kills people in the streets of Japan and then lays more eggs which hatch and attack Godzilla in a cheesy battle.   Watching Godzilla battle a bunch of flies isn't that thrilling.  Godzilla blasts the swarm with his laser breath and the survivors return to mom to give her the DNA that extracted from Godzilla which turns it into a giant flying monster.   Then the real battle starts which was a decent by Godzilla standards.

Skip the movie and watch this music video for it instead

Posted by brad chowen at 8:04 AM No comments: 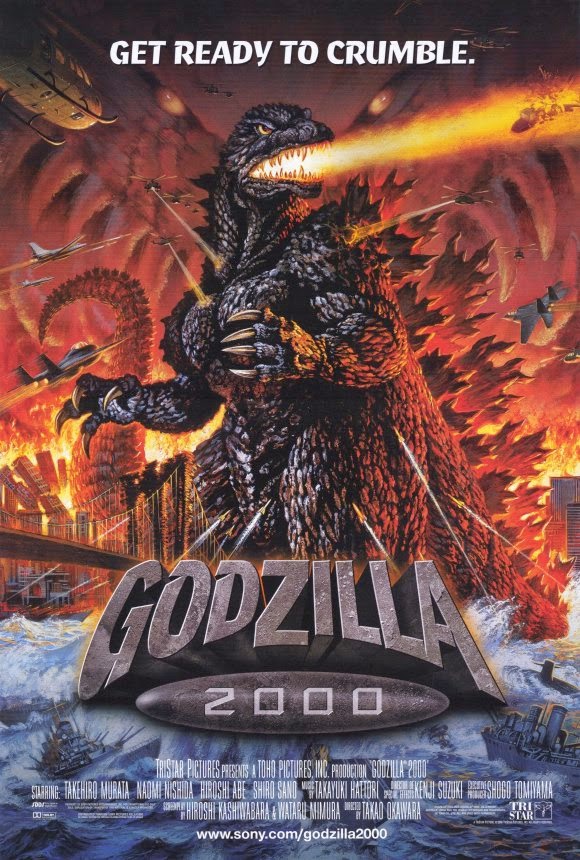 With a new big budget Godzilla in theaters Chiller TV was running a Godzilla Marathon and so I decided to watch a bunch of these older cheesy Godzilla movies.

Godzilla 2000 is the 23rd movie in the franchise and comes on the heels of the big US theatrical release, but returns  Godzilla to his rubber suit roots with a new look.    The movie is called Godzilla 2000 because Godzilla vs the Flying Space Rock sounded too lame.   The flying space rock turns out to be a UFO that wants Godzilla's DNA.   Godzilla and the cheesy flying rock battle.  The rock gets a hold of Godzilla's DNA and mutants into a Godzilla like monster and they battle some more (why not).   Godzilla ends up the winner in this all out battle and then takes off to destroy some more stuff.    It was a decent entry in the Godzilla franchise with some fun battles.

Too bad the movie isn't as good as this great trailer.

Posted by brad chowen at 7:49 AM No comments:

The Battles of Godzilla: Godzilla vs Mechagodzilla 1974 out of 10 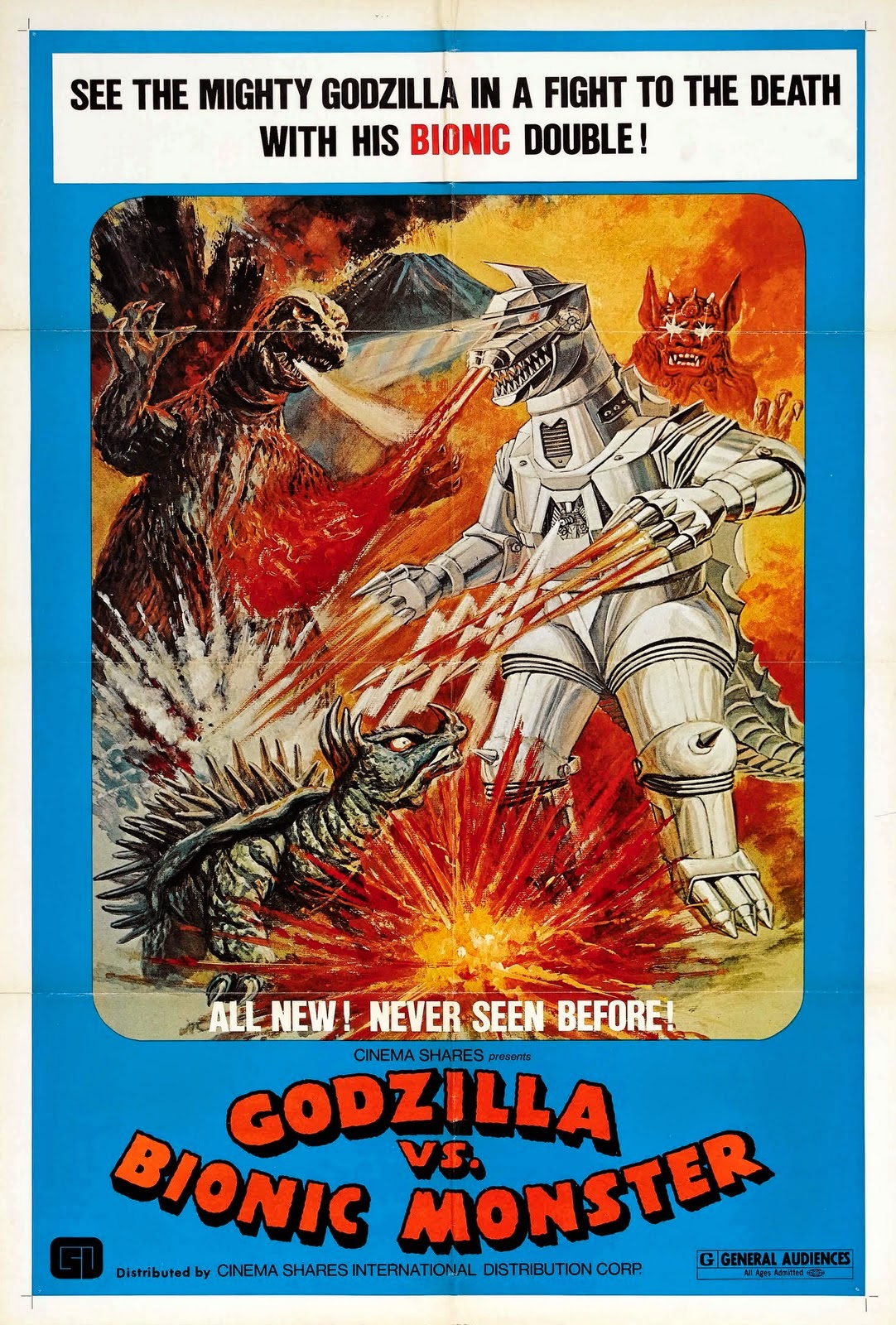 The Franchise
This entry in the Godzilla franchise is the 14th in the series and is  a jumbled mess.   The one consistent thing in the franchise is that it features cheesy looking monsters as played by stuntman in rubber suits doing goofy WWE wrestling moves on top of set with models of cities.   Other than that the movie series has no continuity to speak of. All the movies are written as if none of the other sequels exist.  Godzilla can be good and protecting Japan in one movie and evil in the next.  It makes no sense, but you can always expect some silly enjoyable battle scenes.

The Plot
This movie had a crazy mixed up plot about some outer space monkeymen (in bad Gorilla masks)  trying to use Mechagodzilla to take over the world.   Godzilla is a good guy in this goofy flick in which he and another Guardian monster called King Caesar (that looks look a guy in a dog costume with bat ears)  battle Mechagodzilla.  It features a bunch of mixed in elements like some characters escaping the underground liar of the James Bond like Monkeyman villians. There is also a  strange song that seems completely out of place that is used to summon the  cheesy Dog Monster.  The battle scenes are decent and really the only reason to watch these movies, but the conclusion where Godzilla uses electricity from lightning to turn himself into a magnet and pull Mechagodzilla to his doom was super dorky. 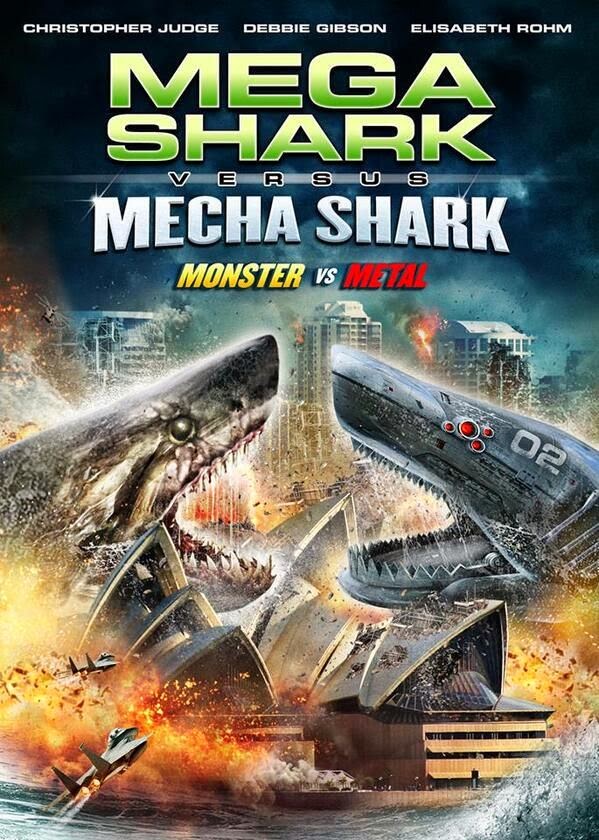 I was working my way through a bunch of bad Japanese stuntman in a Godzilla suit movies on a Chiller TV Godzilla marathon and after about 3 of those --decided to switch things up a little and watch some Giant CGI sharks battle it out.    Megashark vs Mechashark  is the third movie in the Megashark franchise and wow was this 3rd installment terrible.    The movie poster is awesome and I'm always up for a bad shark movie---but this was really, really bad (unfortunately just bad and not so bad it is good like Sharknado was).

The movie stars a couple of recognizable actors that I have enjoyed in other projects,  Elizabeth Rohm  (from Angel)  and Christopher Judge (from Stargate SG1) .  Unfortunately they spend the entire first half of the movie sitting in chairs talking to each other via intercoms.  This doesn't give them much to do other than read bad dialogue to each other.   Debbie Gibson is also back in a role that literally adds nothing to the movie.   The plot was totally predictable,  after all the previous Megashark attacks the government decides to build a mechanical shark to battle the Megashark which Elizabeth's character (Rosie)  pilots with the help of a computer that sounds like KITT from Knight Rider.   Well things go wrong  after a couple of lackluster battles between the 2 sharks   and the Robot shark loses its programming and goes on a rampage through  what is supposed to be Sydney, Australia , but is actually Long Beach CA.    It was just a really boring and dull giant shark movie that even had a dull and boring climax that wasn't much better than the dreadful low budget Super Shark.    I guess I should have just kept watching the bad Godzilla movies instead.....

Posted by brad chowen at 2:31 PM No comments: 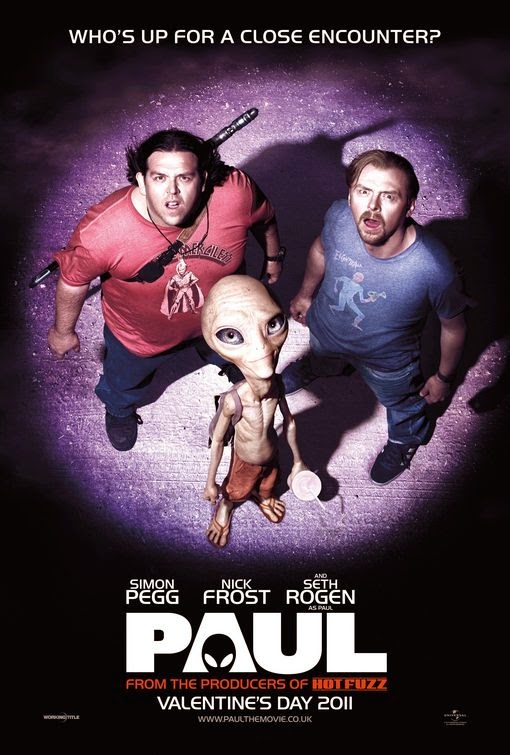 If you replace Elliot with two British Sci-Fi nerds and you replace ET and his Reeses Pieces with a Pot smoking Alien-----then you have Paul.  The movie is a comic retelling of the ET that tries to be an edgier take on helping an alien get back home again.
The movie was good, but not great.

The Cast
The movie had a great cast of comedy pros which included Simon Pegg and Nick Frost in their third movie collaboration  (Shaun of the Dead,  Hot Fuzz).  It also features the talents of Kristen Wigg and Jason Bateman which I felt were completely squandered in this film.  And then there is Paul the Alien as voiced by Seth Rogen.  All give decent preformances, but it felt like a lot was left on the table.

The Plot
Like I mentioned it was basically a pot smokers/geek version of ET.  The two British nerds stumble across Paul they Alien while out traveling the US UFO areas in an RV. They have to help Paul get to a spot that his Alien pals can rescue him.  It was a decent plot that just should have been funnier. I felt that the comedy was very watered down from what you would expect from a Seth Rogen as pot smoking Alien movie.   I really feel that this movie left a lot of comedy potential that didn't make it into the film.

Posted by brad chowen at 5:48 AM No comments: