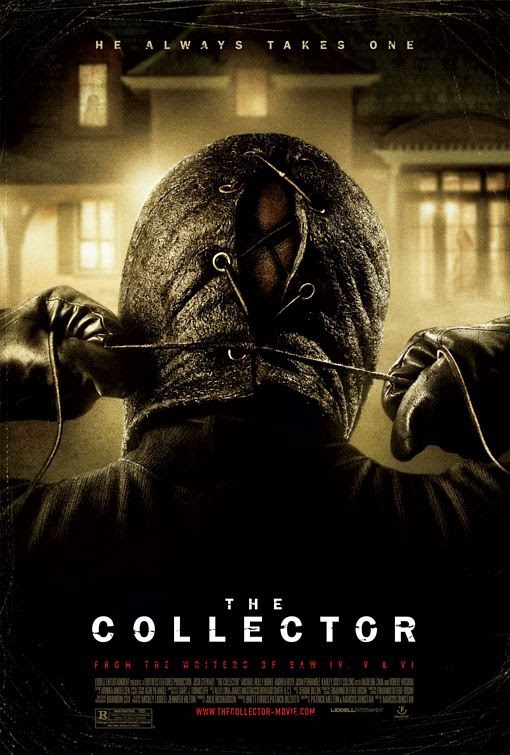 I'll give The Collector some points for a little bit of originality.
It was an interesting horror movie about a thief that goes into a rich families house, while they are out of town,   in order to rob them to pay off some debt he has involving his ex.  The only problem is that he has picked the wrong night to do this.  A killer that collects and tortures people is already in the house and has the different members of the family and others tied up in interesting torture situations.  The whole house is bobby trapped with killing devices like something out of saw and the robber is trying to help rescue the family which includes a little girl (the same age as his own daughter).  Like I said it was an interesting entry into the torture gore genre of horror that movies like Saw,  Hostile and others have explored in recent years.  My only problem with the movie is that I'm not a big fan of anti-heroes.  I already care less about the main character when he is a thief going in to rob the house in the first place.  This plot point leaves me less invested in his plight despite the fact that he has a pivotal moment of caring about the family and trying to save them.

If you like these gory genre films this may be one you have over looked that is worth checking out. There are some interesting death sequences in the movie.

Email ThisBlogThis!Share to TwitterShare to FacebookShare to Pinterest
Labels: Horror movie, The Collector 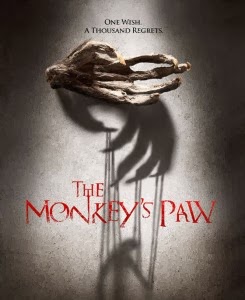 The classic story about the Monkey's Paw gets a movie adaptation that falls short of its potential.  The original short story written by W.W. Jacobs has been adapted many times before in short form.  It has appeared in Tales from the Crypt,  The Simpsons and Ripping Yarns.   This movie version falls short of all of those previous versions.  The main story of the Monkey's paw is that the person possessing it gets three wishes. The problem is those wishes always come with a price and like a in traditional Genie stories don't turn out as planned.   It is a cool concept that was misused in this dull telling.  A guy is given the Monkey's Paw and after wasting his first wish for a sports car that he quickly crashes uses his second wish to bring his co-worker that died in the crash back to life.   The rest of the movie follows the reanimated co-worker killing people around him trying to get him to use his final wish to get his son back that he lost in a custody battle.  The cool concept of the Monkey's paw is basically discarded for a dull killer movie.
Skip this Monkey and search out either the original short story or one of the better versions. 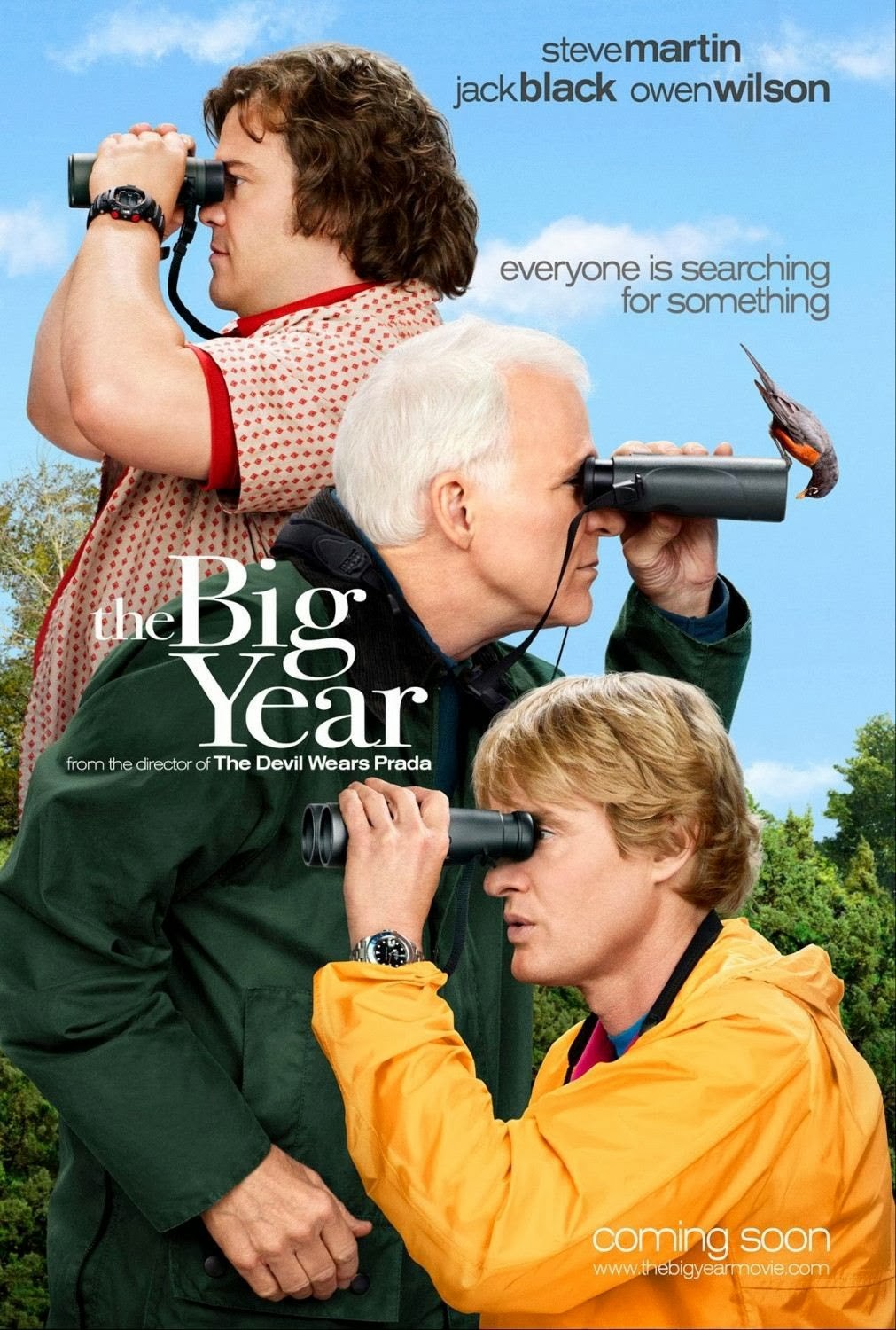 I really don't get what they were going for with this movie?
Are you looking for a wacky, zany bird watching movie---well this isn't that.

I guess the only reason I ended up watching it is because of Steve Martin (one of my favorite comedians) and  Owen Wilson (who is usually pretty good).  When I noticed it on TV I hit the DVR button and figured I'd give it a look.  Despite being a movie about bird watching it had a lineup of big name comedians in it  (even if Jack Black is one of those names----he ranks in several of the worst movies I've seen in the last decade).

The movie itself  was actually a decent.  It just wasn't what you would expect.  It wasn't really a comedy at all.  It was more a love letter to the joy of bird watching and a look at how this obsession could have a toll on the lives of the families of those involved in the hobby.  It is fine if you want to make a movie about bird watching----just don't cast three comedians in what really isn't a comedy and expect it to be a success.   I'm not surprised that this movie tanked at the box office and it isn't something I would watch again.  It just really left me confused how a straight - non comedy bird watching movie got made in the first place.  It is just really false advertising.

Posted by brad chowen at 9:39 AM No comments: 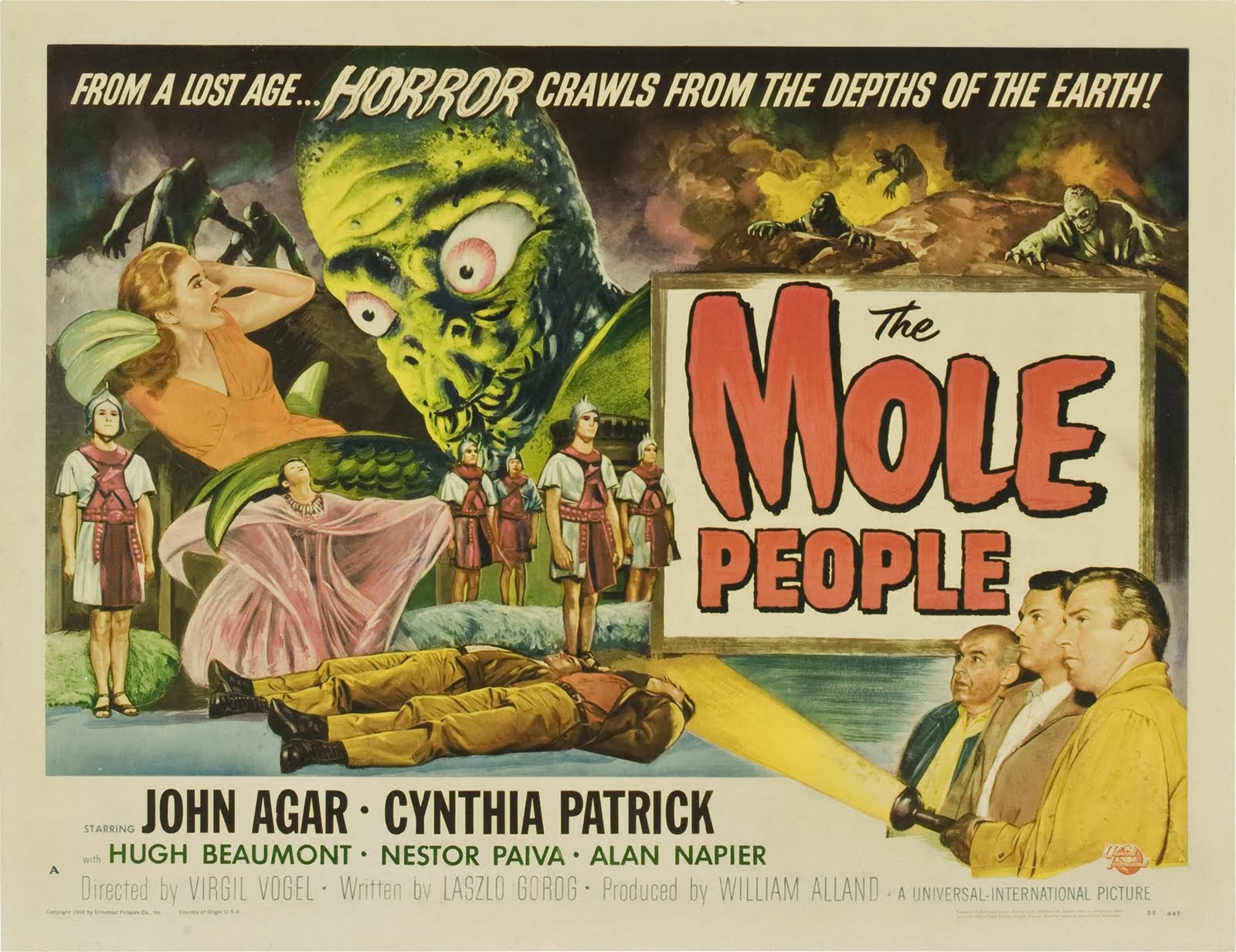 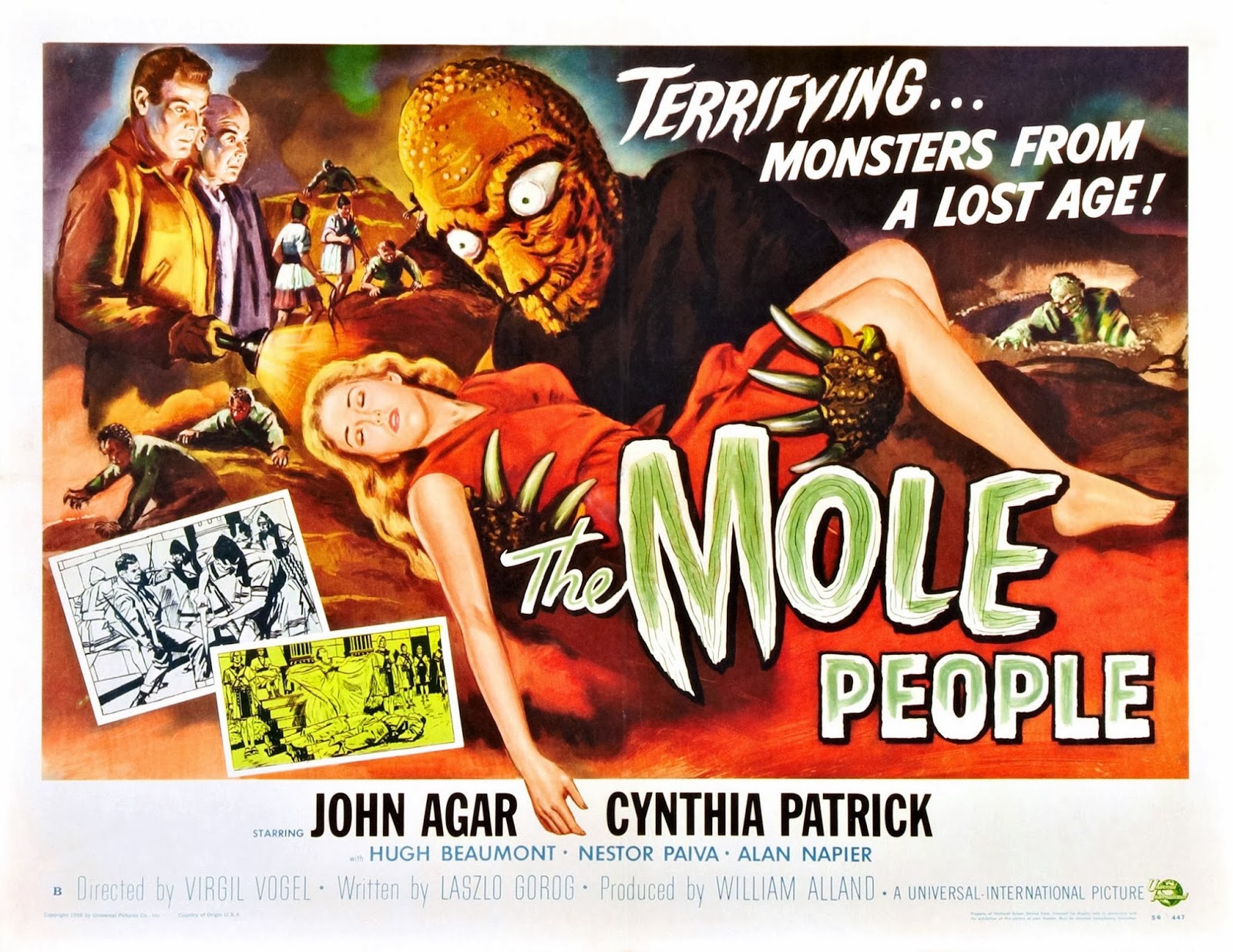 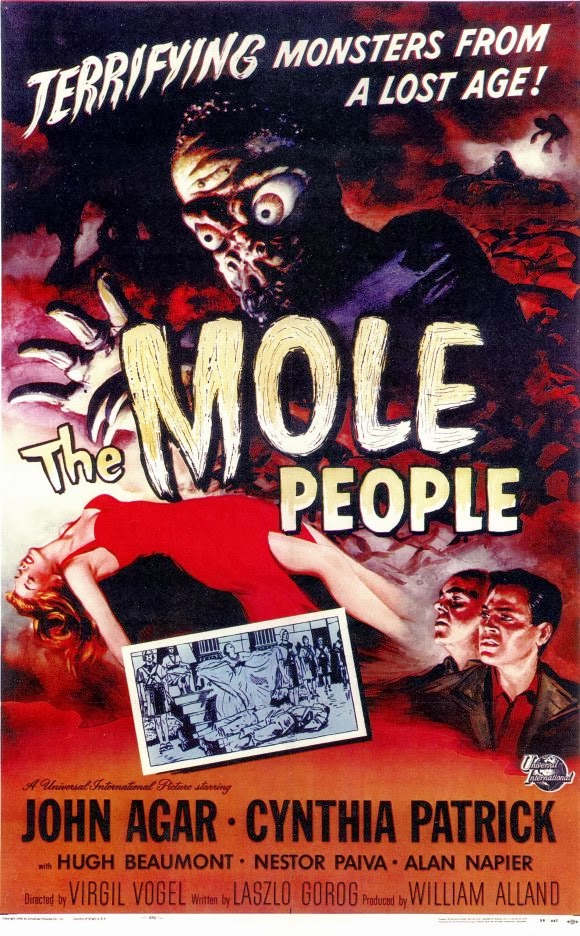 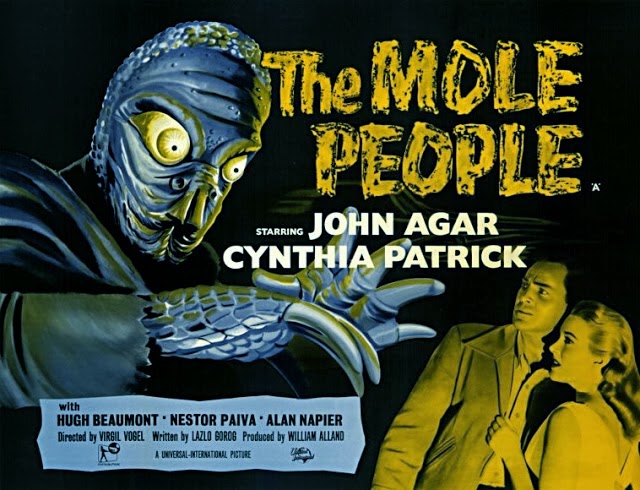 The Mole People is your typical scientists discover a hidden or lost world underground society, that is run by a tribe of Albinos, that mistake them for gods, then decide they aren't gods after all and try to kill them movie.  The  fight scenes are like something out of the 1960's Batman TV series with the scientists using their flashlight to ward them away. The scientists discover that the Albinos have enslaved a race of goofy looking Mole People to harvest the mushrooms they live on.  The Mole People on the awesome movie posters above turn out not to be all that menacing or even bad after all.  The scientists are just looking to escape this underground realm and take with them a cute blond that for some reason isn't an Albino (Genetic Freak). The scientists eventually free the Mole People from their slavery using them to attack the Albinos and thus seek their freedom.   Of course they escape (no big spoiler here) and make it make to the surface at the end all to have a shocking and unnecessary death of one of the characters at the end of the film to an earthquake.   Like most of these lost civilization movies--the lost civlization is completely destroyed and hidden from the outside world again at the end.  It was a decent chessy sci-fi adventure movie that reminded me a little of The Time Machine (The Morlocks)  and several old StarTrek episodes.   The Movie Posters and Trailer are more exciting than the film itself

Posted by brad chowen at 8:57 AM No comments: 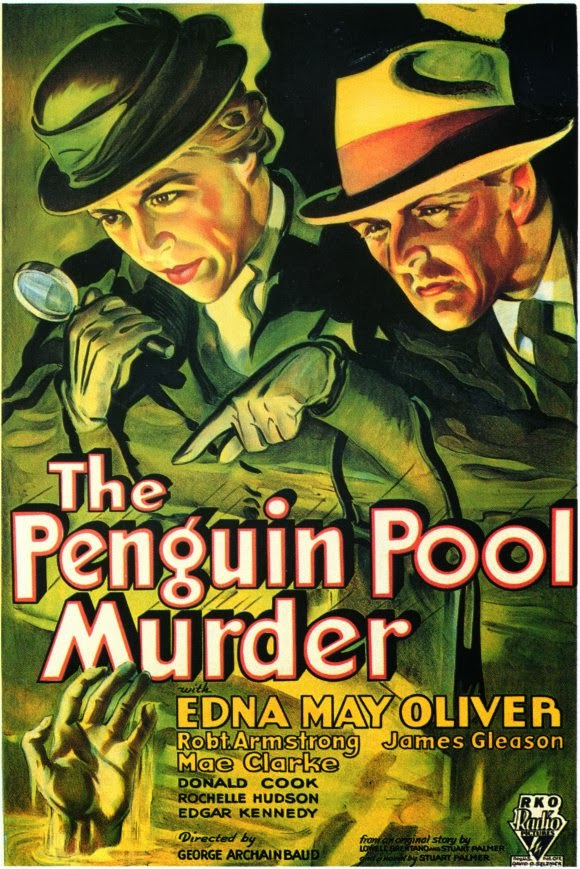 There has been a murder at the New York aquarium and a old matronly school teacher and detective end up teaming up to solve it.  It is a classic 1930's style  comedy/murder mystery who done it.  The movie has many possible murderers and takes several  twists and turns before concluding with a nice courtroom reveal of the murderer.  The old school teacher as sleuth gave the movie its comic tone as played excellently by Edna May Oliver.   I enjoy watching this old 1930's and 1940's  short murder mystery movies.  The weird thing is that they basically feel like TV episodes.  All of the old Sherlock Holmes and Charlie Chan movies that are barely over an hour long have a formula and feel of episodic TV.  It is fun to revisit this old movies that basically laid the foundations for TV shows like Castle (which is currently one of my favorite shows that I've been watching non stop on Netflix trying to catch up on).  The Penquin Pool Murder reminded me specifically of this TV series since the detective in the story teamed up with a school teacher to solve the crime.  Castle of course has a mystery writer teaming up with a detective to solve crimes.  Of course a single episode of Castle is more entertaining than this movie,  but it is cool to see the comic murder mystery solving roots that have lead to one of my favorite genres.

Here is a quick sample of The Penguin Pool Murder...

https://www.facebook.com/pages/The-Super-Fantastic-Terrific-Page-of-Movies-TV-and-Entertainment/178708865473822
Posted by brad chowen at 9:17 AM No comments: 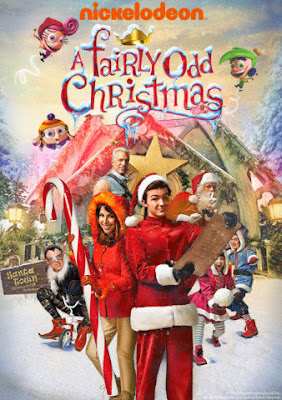 Sometimes you just have to wonder why?  Why make  Fairly Odd Parents made for TV movies with a college aged Timmy Turner when the animated show is so good on its own.  Why not just make animated movies instead with Timmy at his correct age?  Fairly Odd Parents was one of those few cartoons that could entertain the adults as well as the children.  The great thing about animation is that you can do anything and the story of this little buck toothed kid and the fairies that grant him wishes.  It works so perfectly in the animated setting.  Bringing this concept into the real world on a TV movie budget limits what can be done with the story.  It just seems like a waste to me.  Fairly Odd Christmas was a decent holiday movie in which the college aged Timmy Turner  (that still hangs out with his fairy godparents)  ends up having to step in for Santa (who has a concussion).  But first  Timmy Turner needs to go on a trek to some influential elf to get himself off the naughty list.  It was a watchable family film---but not as good as any random animated episode of the series. That being said, if the kids are fans of the TV show I'm sure they will like it.

Facebook movie page
https://www.facebook.com/pages/The-Super-Fantastic-Terrific-Page-of-Movies-TV-and-Entertainment/178708865473822
Posted by brad chowen at 11:05 AM No comments: 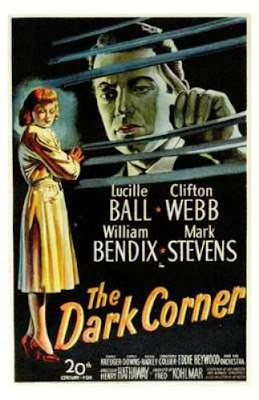 The Dark Corner was a decent 1940's film noir movie about a private eye (played by Cliffton Webb)  that finds out someone is following him and trying to kill him.  He thinks a man from his past is involved....but is he really or is someone else just setting him up?  He is helped by his new secretary (played by the famous comedy legend Lucille Ball) that believes in him and eventually helps him to solve the mystery.  It is a typical noir story with a tough private eye roughing people up for information, getting into fights and smoking more cigarettes and drinking more booze than an episode of Mad Men. 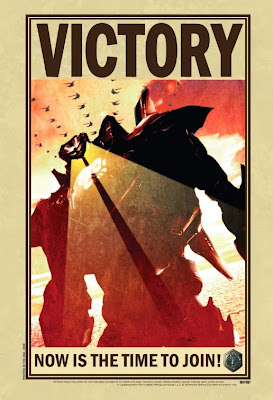 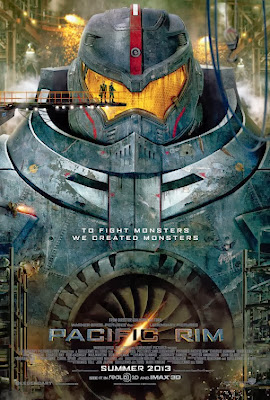 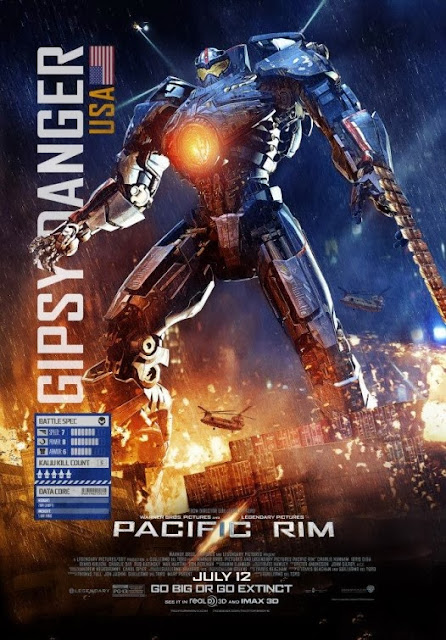 Pacific Rim is director Guillermo del Toro's love letter to the Godzilla monster movies of the past.  With a beautiful visual palette he has taken everything great about the old school man in a suit crushing models of cities and taken it into the digital realm.   The movie takes place in the future where Earth is being invaded by  Kaijus (Giant Monsters) from an inter dimensional portal in the bottom of the ocean's floor .  In order to try and protect the Earth from these monsters we have built giant robotic monsters of our own called Jaegers.  Basically the movie is Godzilla vs Mechagodzilla on an epic scale.
The Story:  The story was interesting.  I liked the ideas of the an inter dimensional portal in the oceans floor as being where the monsters came from.  This concept is much better than the nuclear radiation that fueled all of the Godzilla era monsters.  Unlike the Godzilla era monsters that attacked cities for no apparent reason these Kaiju have a purpose.  They are here as an invasion force that is becoming more and more relentless by the day.

The Visuals: The visuals were epic and stunning especially in the neon hues during the battle in Hong Kong.  I have liked each of Guillermo's dips into the world of fantasy better with each film.

The Cast: The cast was solid especially Idris Elba as the commander of the Jaeger unit.  Ron Perlman who starred in both Hellboy films makes an appearance in a smaller role in this film as well.   This is what a monster movie should be.  A much better effort than the 1998 dud that was the relaunching of Godzilla.

All in all Pacific Rim was an exciting and interesting tribute to genre that it improves upon.
A must see for fans of that genre of films.