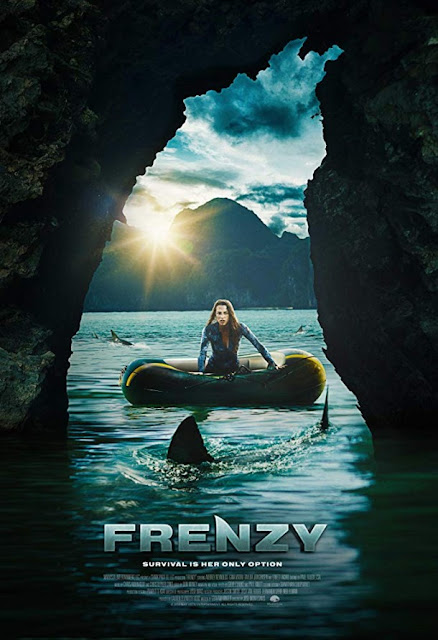 The single best thing about this movie it the poster.  The movie is basically a cheap version of The Shallows (which I didn't enjoy).   A couple of sisters that are a part of some Adventure You Tube show end up in a plane crash into the ocean with their crew.  The crew end up shark bait and the movie is basically the one sister on a raft after the crash watching her friends get killed by sharks.   The movie uses flashbacks between the boring raft scenes to give the characters some semblance of character development, but this tactic just becomes annoying.    About half-way through the film everyone is dead when the one sister makes it to a tiny little island the looks like a mushroom.   Magically her injured sister washes up and they spend the last 40 minutes on a wooden platform under the mushroom island.

They flag down a boat that unfortunately the people fall off of into the water with the sharks.    Then they pull some Ewok village trick to lure one of the sharks to death with a well timed boulder on a rope which leaves two  sharks vs two sisters in a not so epic showdown.     The shark effects were actually decent --the story was just dull.  I actually almost gave up on this film around the 1 hour mark--but toughed it out to a decent ending that partially redeeemed the boring film. Nightmare Shark is a bizarre shark movie that aired this year on the SyFy channel as a part of Sharknado Week.  It was produced by Curmudgeon Films who also did Trailer Park Shark and Atomic Shark and actually features some characters from those films.   So you could pretty much say those movies are a part of a shared Shark Universe.

The story focuses on a group of survivors of shark attacks that are dealing with nightmares from those encounters that seek out help of a scientist that has developed and experimental drug to help deal with the nightmares.    The scientist turns out to have ulterior motives and is actually trying the use the survivors to summone a Hawaiian Shark god from the realm of dreams into the real world.

The film is like a strange Nightmare on Elm Street with a CGI shark instead of Freddy Krueger.  You can never tell when a character is awake or dreaming and in fact the ending makes everything that happens even more unclear.   I give the film some credit for trying to bring something different to the Shark Movie genre --but it is almost too strange and weird.

The movie was originally titled "Curse of the Dream Witch" which might explain one review on IMDB where the reviewer said that there wasn't even a shark in the movie they saw?   It could explain some of the film.  In certain scenes the characters are being attacked by what looks like a swarm of flies and a weird prescence instead of a shark.   I almost wonder if the film wasn't re edited to add more Shark footage so the films name could change and it could be re titled as a part of Shark Week.   I can't find any information to support this theory --but it might explain how it seems so strangely pieced together.