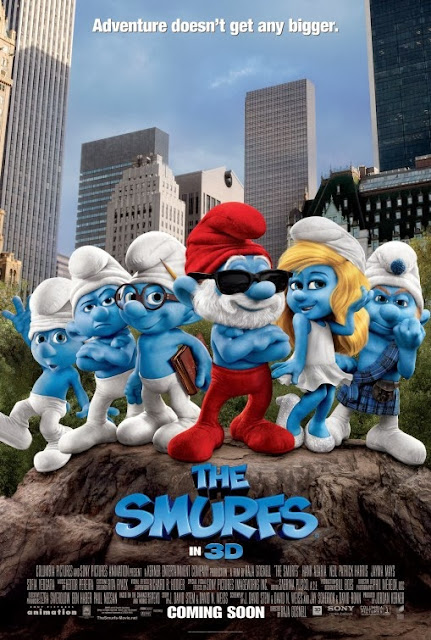 Kids movie choice.....All I can say is Smurf this!  I was Smurfing bored throughout this whole Smurfing movie despite Hank Azaria and Neil Patrick Harris.  There was just nothing magically about this Smurf adventure.  The story was tired .....Let's just bring the Smurfs to modern day New York and have Gargamel chase them around.  It was basically a rip-off of Enchanted without the magic or fun.  Yet it made a ton of money and had a sequel.   What do I know?   I was never really a fan for the original cartoon Smurfs series back in the day--so I wasn't looking forward to a Smurfs movie and after this dull Smurf adventure--I will try and avoid part 2.  Your kids may Smurf this movie, but I just thought it was a Smurfing waster of my time. 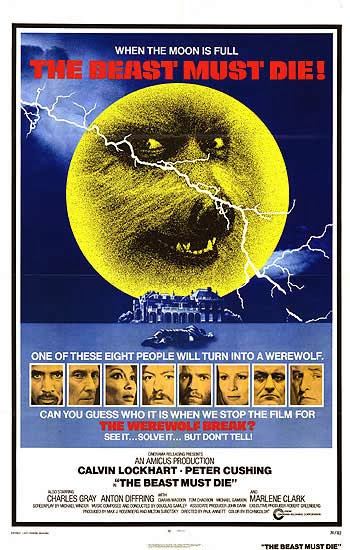 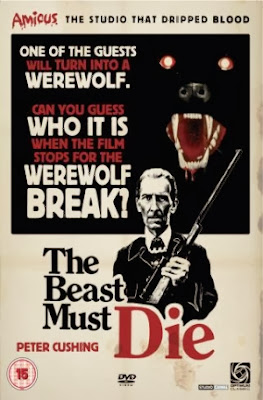 A millionaire invites a group of people to spend time at his mansion.  One of them he claims is a werewolf and he is determined to figure out which one by the end of the weekend and hunt and kill them.  "The beast must die"  he  loudly proclaims in overly dramatic fashion.  The film is kinda of cheesy and yet kind of interesting at the same time. It is more of a who done it with a twist than a horror movie with a little bit of The Most Dangerous game thrown in.    The main actor played Calvin Lockhart is so over the top that I found his performance enjoyable.  The film also features horror legend Peter Cushing as one of the possible werewolves.   The end of the movie the 4th wall is broken during a 30 second werewolf break where the audience is asked to guess how the werewolf is like some cheesy Castle Films stunt.  Enjoyable nachos with 1970's cheesy sauce.

My Facebook movie page is here
https://www.facebook.com/pages/The-Super-Fantastic-Terrific-Page-of-Movies-TV-and-Entertainment/178708865473822
Posted by brad chowen at 10:15 AM No comments: 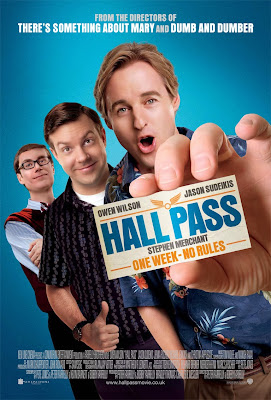 Owen Wilson and Jason Sudeikis are typical married men with struggling marriages.  The sex isn't happening so much anymore and they are caught eyeing other women in front of their wives.  The guys  are overheard talking about how much they would pay to have a fling with no consequences during a poker game,  their wives played by the beautiful Christina Applegate and Jenna Fischer let them have one week hall passes from their marriage.
The haves figure the hopeless fellows will just come crawling back within a few days when they figure out how good they actually have it.   One week where they can go wild and basically have a free pass to do whatever they want.  I was expecting the movie to be a wilder crazier comedy than it was--but was pleasantly surprise at the route the plot took instead.  The movie actually had a really good plot and the funnier moments came from the lack of any game that the guys had on their week long hall pass, of course I don't know why anyone would want a hall pass if they were with Christina Applegate or Jenna Fischer.  For example one of the best scenes was the first day of the guys hall pass when their jealous married  buddies come along to watch them pick up chicks at an Applebee's and they end up just eating a ton of food and going home early instead.
Best Quote from that scene.
Friend: "Are you sure Applebee's is the best place to meet hot women?"
Rick:  "You thinking Olive Garden?"
The movie was funny and yet subdued and intelligent in its choices.  It was definitely a pleasant surprise and definitely a comedy I recommend.  I found myself actually cheering for Owen Wilson when he decides not to hook up with the insanely sexy and beautiful Nikki Whelan (a Blond Australian actress that would make most men with they had a hall pass) which is a credit to the film and its story.

Posted by brad chowen at 9:54 AM No comments: 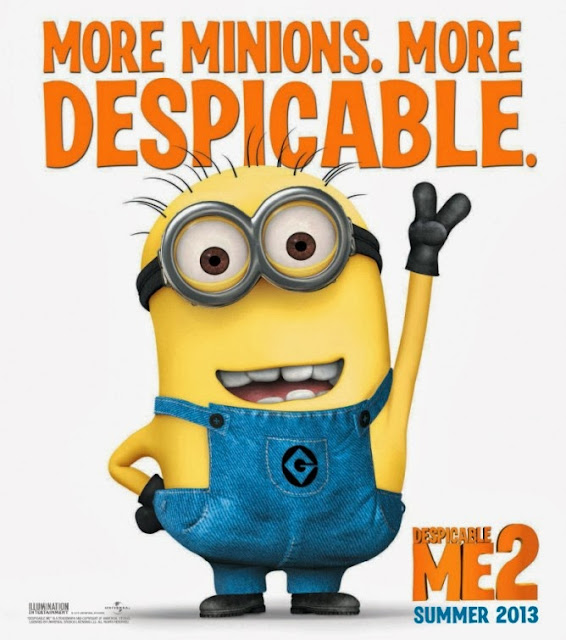 Despicable Me 2 cleaned up at the box office earning over 360 million domestically and almost a billion worldwide, which means a Despicable Me 3 is probably on its way soon.  I personally thought it was just a very average animated movie.   It wasn't even as good as the first one which was also very ordinary. At least the first one had the Willie Coyote type action sequences between the two villains.  Now Gru (voiced again by Steve Carrell) is a father figure and no longer has the evil that made him entertaining the first time around.  Apparently all the audience needs is a bunch of random Minion scenes which the kids seem to love.  The minions are a bunch of bumbling yellow creatures that mumble incoherently and look like beans.  They are slightly funny --but not funny in the way that say Olaf is the blockbuster Frozen.   I guess maybe once again (with the exception of How to Train a Dragon) Dreamworks animated humor just doesn't work for me.  Despicable Me 2 despite its success just left me feeling nothing and confirmed once again that I'm definitely a Pixar/Disney kind of guy.

Here are my thoughts on the original Despicable Me
http://bradgeekness.blogspot.com/2012/07/animated-movies-movie-2-despicable-me.html

Posted by brad chowen at 3:41 PM No comments: 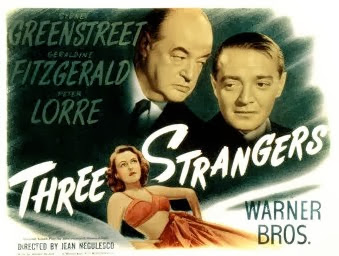 Three Strangers was an interesting film about 3 strangers that gather on the night of Chinese New Year and make a common wish to the Chinese goddess of fortune and destiny concerning a sweepstakes ticket that one of them had purchased.  The movie then follows their individual stories and bad luck that follows there meeting.  It ends with all of them meeting up again the day the ticket wins.  The movie stars Sydney Greenstreet, Geraldine Fitzgerald, and the always mysterious Peter Lorre.   The tale includes murder trial, a husband that is cheating on his wife and an attorney that has lost of his clients money. The acting is excellent and the story keeps the viewers interest as we wait to find out how their tales will weave back together in the end. 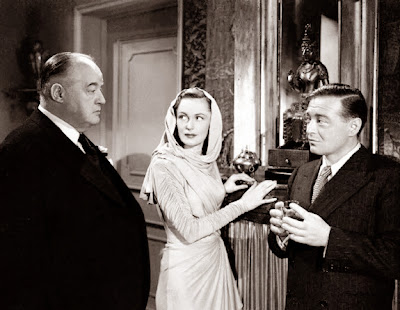 Posted by brad chowen at 8:22 AM No comments: 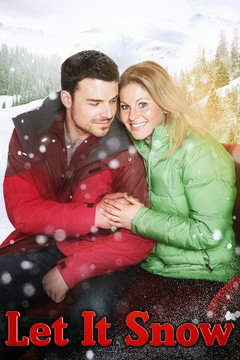 Let is Snow was a decent, yet easily forgettable and very predictable holiday movie.  It stars Candice Cameron as an executive that works for her dad's resort company that is sent to write up a report on a quaint little family owned ski lodge in order to assess how it can be transformed into a money making big resort.  She ended up falling in love with the son of the former owner, the place itself and the spirit of Christmas.  The problem with the film was that she falls in love with the place and the son too quickly.  There is really no transformation or drama to the piece. The plot was set up to be a transformation for her character, but it doesn't really seem like there was a conflict or hurdle in that transformation.

Posted by brad chowen at 7:34 AM No comments: 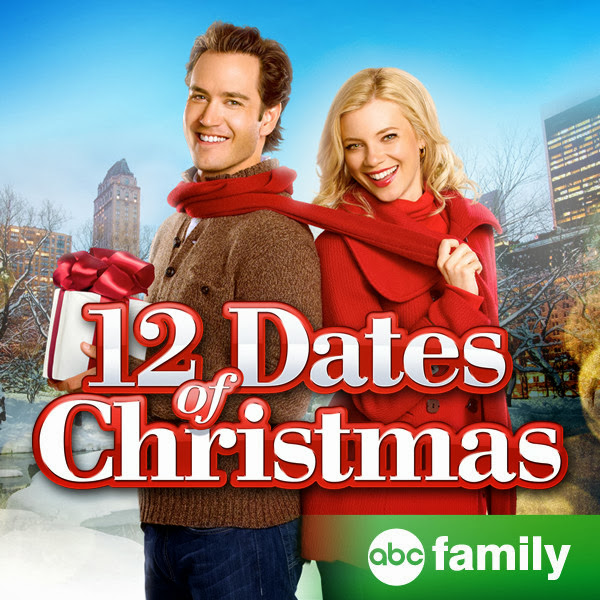 This movie was basically a Christmas version of Groundhog’s Day with a magical focus on the 12 Days of Christmas.   The movie stars Amy Smart and Mark Paul Gosselaar .  A women passes out on Christmas Eve in the middle of a department store after being sprayed  by perfume.  She finishes out the day after making a series of bad decisions alone with her ex’s dog.    She wakes up the next day on the floor of the department store again (just like in Groundhog’s day) and has to live the night over and over again until some magical force decides she finally got it right.   It was a cute holiday movie which was interesting because of its magical storyline…. (Who hasn’t wanted to relive a day in hopes of a different outcome? ) The story worked well, but feel short of some of the elements that made the movie it copies such a classic.   In Groundhog’s day the main character as played by Bill Murray became a much better person as a result of his experience.  His character went through a much bigger change so the ending was more satisfying.  I didn’t really feel that Amy Smart’s character needed to go through a big character transformation, she wasn’t an unpleasant person at the beginning of the story, but instead just unlucky in love.

Posted by brad chowen at 6:53 AM No comments:

The Description
According to the description which made me hit record on the DVR the movie was  about bikini clad assassins taking on a saboteur.  This low budget attempt at a spy movie features a group of women that are a part of  an elite unit that is enlisted to take out a sinister ex agent that is trying to threaten the world.

The Movie
The movie itself is quite dull,  despite the sound track that tries to make you think that  something interesting is happening at all time.  Someone walking up a staircase isn't exciting just because there is a hip non-stop drum beat in the background.  Almost every single scene has this fake James Bond  music attempting to fool the viewer into thinking something exciting is going on when nothing exciting is.  The movie even has a terrible sounding Bond wannabe song in the end credits that was almost laughable.

The Acting
The acting is  pretty bad which you can get a sense of in the trailer  (Not SO Bad it is Good unfortunately).    The action in the movie is silly and cheeseball.   The action scenes feel like something out of a badly choreographed episode of the A-Team.  This movie may have inspired the TV series Charlie's Angels (a much better product)   and Quentin Tarantino was influenced  by it when coming up with the Deadly Viper Assassination Squad in Kill Bill. (the film didn't seem like anything inspiration worthy to me).
The villain has a plan to take over the world by releasing rats with the plague strategically throughout the world , luckily the Doll Squad wearing outfits out of a Bruce Lee Kung Fu movie assault his compound and save the world before his fiendish plot can take place..