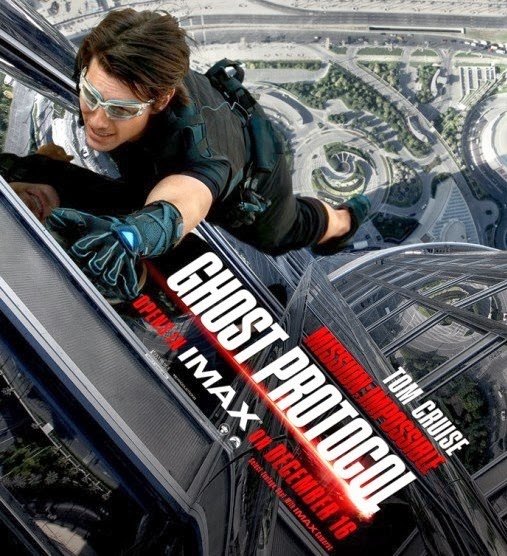 This is the fourth adventure for Tom Cruise as Ethan Hunt.
Ghost Protocol was a good solid action movie, but I wasn't as impressed as everyone else was apparently.  The story focuses on Ethan Hunt and a team of agents that basically trying to stop a rouge nuclear launch while under the radar since they are blamed for an explosion at the Kremlin.  The action sequences (despite Cruise's awkward running style)  were good.   Jeremy Reener did a good job as the reluctant ex field agent that ends up a part of the action. The movie just lacked for me some of the cool elements that  I had really enjoyed  in Mission Impossible 3.    Mission Impossible 3 which I had watched earlier this year got me interested in a franchise that I had bailed on after the dismal Mission Impossible 2 which I.  Ghost Protocol was good... just not to the level of James Bond or even Tom Cruise's own  (over the top and silly)  Knight and Day from 2010.      It wasn't even as good to me as some of the really good episodes of the Spy -comedy TV series Chuck.  It treaded too familiar ground in many scenes like ----let's have the hot women seduce and steal the codes from the rich bad guy....which quite frankly was done better on Chuck and recently with a twist on  Agents of Shield.

The story just didn't capture me as much as Mission Impossible 3 which had a much better villain.   The missile scene at the end seemed ridiculous,  anyone who has seen War Games would know that a missile launch like that would have an immediate response so I just couldn't buy into.  For every interesting  sequence like the car parking structure battle at the end of the film that worked really well---there was an uninteresing one like the chase through the sandstorm just didn't work.  I'd say it is worth checking out if you like spy movies, but I definitely wouldn't rate it as highly as most people do.  I'd say it ranks 3rd amonst the 4  Mission Impossible films.

Here is what I thought of Mission Impossible 3

Posted by brad chowen at 3:28 PM No comments: 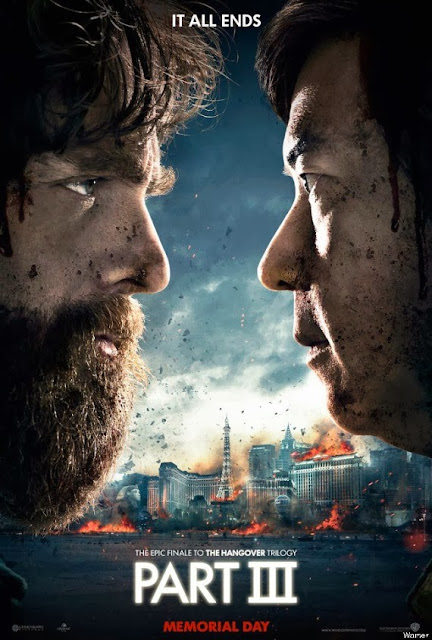 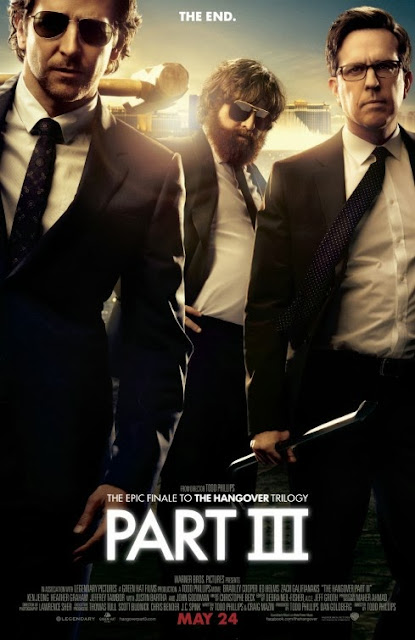 I loved the first 2 Hangover movies, so I was really looking forward to the Hangover 3--but ended up missing it in the theaters. Well I didn't miss much.  The Hangover 3 felt more like a money grab than an actual inspired sequel.  The had already covered  the same ground with Hangover 2 basically repeating the first movie but in a different setting.  Many complained about this--but I actually thought it worked really well.  The Hangover 3 was missing that "Dude Where's my Car" element that the original stories had.  That  element of the characters trying to backtrack and find out what happened the night before in order to solve the crazy mess they had stumbled into.  The Hangover 3 goes a completely different direction and teams them up with Mr. Chow in a gold bar heist.  This story though action packed wasn't as interesting or as funny as the situations in the first 2 flicks.  The movie felt more like a retirement tour --just putting the characters from the first 2 movies through the uninspired paces of a not that interesting story.   Too much Mr. Chow (better in small doses) and not enough laughs.   The movie should have started with the clip at the end---that would have made a much more interesting story.

Posted by brad chowen at 1:36 PM No comments: 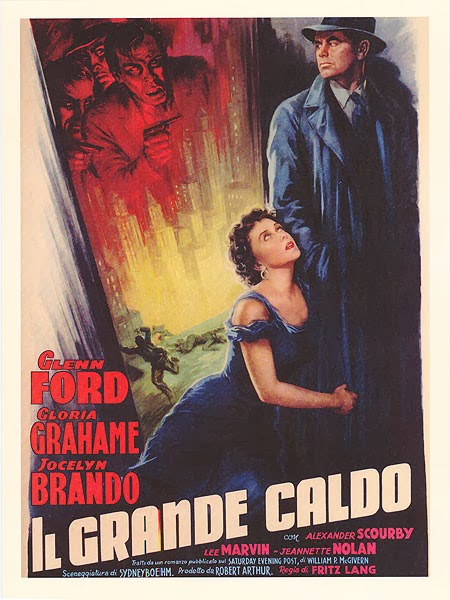 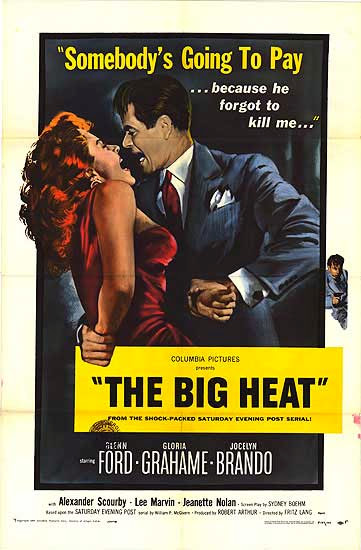 Starring Glen Ford...The Big Heat is a solid film noir about a detective who finds out the suicide of a fellow cop was actually a murder. Then the person that tells him this information ends up dead as well.  He is warned off the case and doesn't listen which ends up in personal tragedy for him.  Then he sets out for revenge.
The movie also features a great performance by a young Lee Marvin as one of the ruthless bad guys.   I find myself always liking good guy revenge stories.  I like to watch the guilty be punished and this is exactly that kind of film.  Definitely a film noir film worth checking out.

The Bering Sea Beast.   More like the Boring Sea Beast.   It is basically a shark movie, but instead of sharks the main characters end up battling Sea Vampires.   And by seas vampires what I mean is some Manta Ray looking creatures that look like they are made out of tar thanks to the cheesy digital effects. 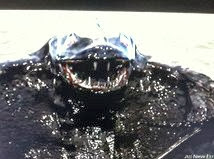 These sea vampires that come from the sea –can fly and waddle around on land as well as they try  to suck the blood out of the humans that disturbed their underwater cave while dredging for gold.   The acting, dialogue and effects are cheesy, but not to the point of being enjoyable.   The music was actually decent and added to scenes that would have been dull based on the visuals alone.   It was just hard to be even remotely scared by this silly looking monster that wrapped up their victims like a scene from the original Clash of the Titans.  There was a scene where  a baby one burst out of one of the characters chests just like in Alien. All in all this is no Sharknado .... Not even close.

Email ThisBlogThis!Share to TwitterShare to FacebookShare to Pinterest
Labels: Bad monster movies, syfy channel, The Beast of the Bering Sea 2013 4 out 10 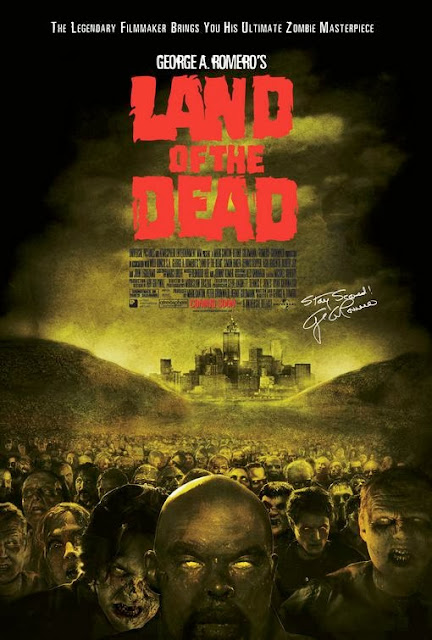 George Romero's return to the genre is a mixed bag.  On the heels of the  excellent Hollywood remake of his Dawn of the Dead,  George comes at this zombie movie with something a little different.  I guess it basically follows the next logical step from Bub the zombie in Day of the Dead.  The movie should have been called Zombie Messiah,  since a gas attendant zombie appears to be the leader in the next step of the zombie evolution as he starts relearning how to use tools and weapons and gets a horde of zombies to follow him in an attack on the city.   This zombie movie takes place when the zombies have pretty much taken over the world and the rich lead by Dennis  Hopper are living the fine life in a fancy walled in city while lower class citizens go out into the world of zombies to bring back stuff for the rich.   So I guess you could say that it has references to the lower classes rising up against the upper class in the form of Zombies basically starting a revolution.   Simon Baker stars as one of these warriors that drives around in a armoured bus taking out zombies on supply missions.    The movie is a mixed bag because it fails in bringing the fear that most zombie movies create.  The film chooses to focus on a side story involving the main character going out to stop one of  his former partners from blowing up the city.  The characters are too well armed and the city too protected for most of the film so you don't get the sense of peril that you should out of a zombie movie.  The movie picks up a little towards the end when the zombies led by their Messiah (thought he was actually going to walk on water at one point) leads them across the water to assault the city .  These scenes were interesting, but were pretty much too little to late to make this a great movie.   An interesting concept that just didn't really work effectively despite having a few cool scenes here and there.

The 5 Worst movies from 2004-2008:  Too rip off cash grabs, a terrible American Idol satire,  one of the worst zombie movies ever and  a movie about disappearing dog poop. 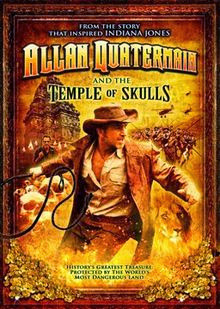 I so would love one of these low budget Indiana Jones wannabes to actually be good.  The poster looks great ---the movie does not.  It was clearly just an extremely week attempt at cashing in on the Crystal Skull.  It was just an uninspired mess that honestly was just a DVD cash grab the same way the old cartoons that you would see at the grocery store DVD bind that would rip off the recent Disney movies. 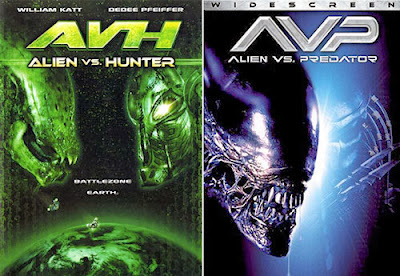 A nearly unwatchable  Aliens vs Predator  Rip-off.  The Poster is a total rip-off ...too bad the movie wasn't.  Instead we get a movie that looks like it has a $2 budget.  I dare anyone to try and survive this movie all the way through from start to finish.  Even the Great American Hero couldn't save this movie.

Here is my blog about this movie 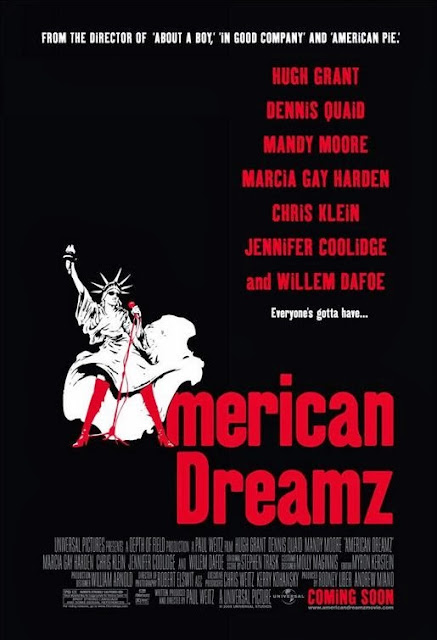 This movie was supposed to be a satire about American Idol and America in general.  I've seen many positive reviews about this movie and I just don't get it at all.  Despite having Hugh Grant this movie was just unwatchable.  If I want satire I'll just watch The Simpsons or  Family Guy instead of this dull dud. 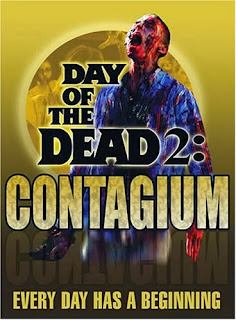 This was just an extremely odd, ill conceived  and uninteresting movie. 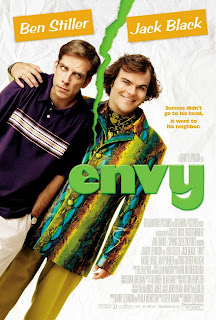 Another classic  Jack Black turd about a guy that invents something that gets rid of dog turds.  I just wanted to get rid of this movie.  The story was just terrible and the movie was just not funny.  Not funny at all.  This movie was a pile of sh..   Jack Black did something unheard of.  He found his way into 2 of the worst movies of the last 10 years.

Posted by brad chowen at 6:55 AM No comments: