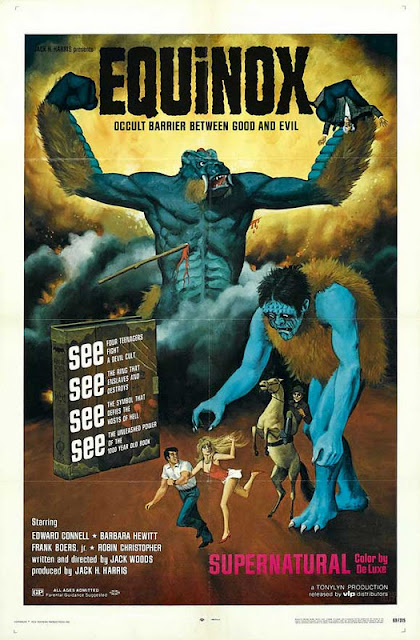 About 20 minutes into this film all I could think about was that The Evil Dead (one of my favorite horror films)  borrowed a lot from this movie.   The key to borrowing elements from an older movie is to make it better.  Even though the makers of The Evil Dead deny being influenced by this cheesy earlier film it has many common scenes.  Here was an interesting blog that showed screen caps showing this fact.
http://thelucidnightmare.blogspot.com/2011/09/equinox-vs-evil-dead-comparing-cult.html
Equinox is a bad movie ---but it is SO BAD that it is GOOD and therefore enjoyable.   It is part  homage to  Ray Harryhausen  with stop motion special effects and and feels like something out of the 1950's and part  H.P. Lovecraft  (which is where Evil Dead similarities come into play).  One of the stars is Frank Bonner that would later play Herb on WKRP in Cincinnati    It follows a group of 4 young people that are heading up to some professor's cabin in the forest for a picnic.   Instead they stumble across the Book of the Dead that opens a gateway to  hell...  They listen to a recording very much like in Evil Dead where the Professor talks about the book.    In this movie the consequences of stumbling upon this book are comical  with Green Giants in Tarzan outfits and giant Rancor looking creatures...   A part of what makes this movie so bad is that it was fiddled with later and the story changed and additional scenes shot for the new release....which makes for an odd plot and goofy voice overs  and the actors looking different in scenes that should connect since they were shot years apart.

It was interesting to find out that Dennis Muren (of ILM Star Wars fame and beyond was director and co-author of this film)The best summary I found  online about this movie can be found here
http://www.dvddrive-in.com/reviews/e-h/equinox6770.htm
Posted by brad chowen at 3:52 PM