I'm a huge James Bond fan---I've seen all the Bond films...  Sean Connery and Pierce Brosnan are the best  Bonds  ---Roger Moore's films are my favorites because they are more outrageous and at times almost seem like parodies of themselves.....Octopussy  is a classic..   (but this isn't a James Bond  Blog---I will save that for some other time)   This is about some of the other Spys...The spys that don't take their drinks shaken and not stirred......   I always say "I wish I was more  like James Bond and less like Clark W Griswald"  One can wish right--(Well while i work on that) ---Here are some Bond  Non -Bonds  that are worth the time to enjoy.
I'll start off with  Get Smart
The classic Spy spoof Tv show starring Don Adams and Barbara Feldon 1965-1970   ---which followed the hapless adventures of Maxwell Smart  battling against the sinister Kaos.. armed with a shoe phone...  A great parody of the Spy genre.. 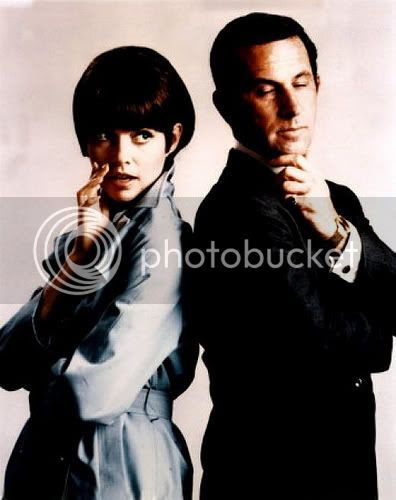 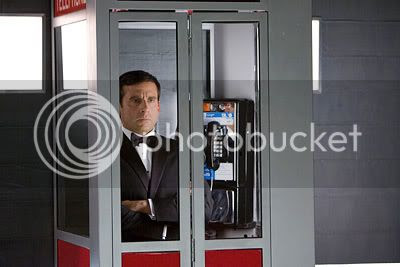 Get Smart 2008 8+  (You had me at "Missed it by that Much"
It is about time a comedy did get smart and Get Smart did. There were no drop on the floor hilarious moments in Get Smart—but  it was one of the first comedies in awhile that i felt  was just a solid from start to finish. It had an actual plot (a rarity these days) for comedies that seem to often to seem like a series of sketches that haven't seen an editing room...  The movie was a nice blending of quality action sequences and comic scenes that didn't get in the way of moving the story along.. The movie was extremely well cast like a blueprint from the quality TV show. Steve Carrell was excellent as Maxwell Smart-(Don Adams would be proud) --Anne Hathaway as Agent 99 went from (Cute and quirky) too absolutely gorgeous.. And "Can you smell what the Rock is cooking" (Give this dude his own True Lies movie already)… Terrance Stamp --always a great villain as Siegfried - " Knell  before Zod" The movie was a well paced action—comedy that I would definitely see a franchise in…Improving on the classic Tv show that was small screen comedy---this film version  took Get Smart to the next level—while giving TV fans what they wanted. And even though I could see a certain plot twist coming a mile away I didn't care because it lead to a great action piece. And the ending with the introduction of Patrick Warburton as another character from the Tv Series---just set it up perfectly for more movies. 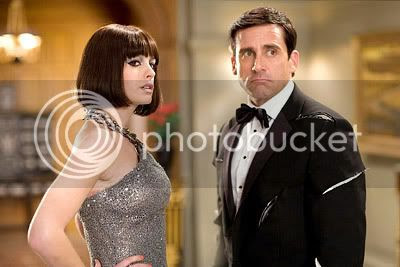 Several  weeks  ago while getting anxious for Get Smart to come out I came across for the first time   the Matt Helm film series which starred Dean Martin... 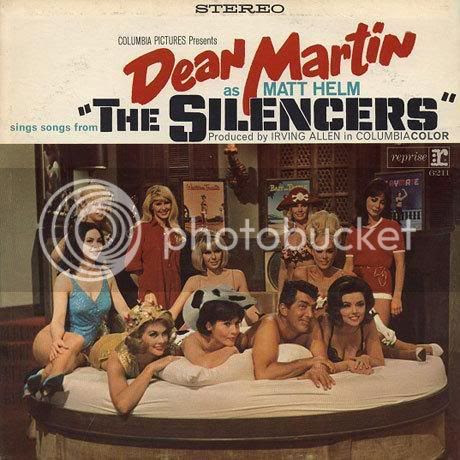 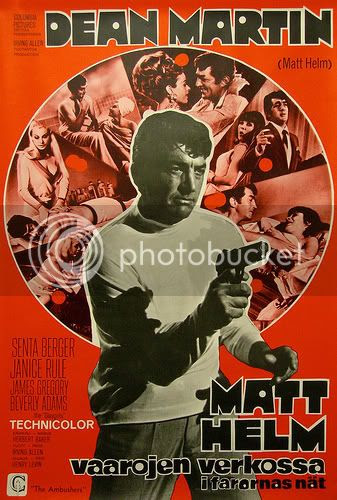 Muderer's Row 1966 7
The Wrecking Crew 1969 6
Now I'm not sure if  Dean  Martin was acting or like Charlie Sheen on Two and a Half Men ---just playing himself.....Because  Matt Helm was a drunken womanizer....  But beside whether he was acting or not the  Helm series was still entertaining --even when Martin is trying to run or fight  and looks like he could use a much needed 20 minute break with a cocktail.
Here are some of the good lines from this series
Matt Helm: I couldn't help noticing, but, these are your clothes?
Barbara: What if they are?
Matt Helm: Oh, I know you have a headache but don't take it out on me, I mean, what should I do with these?
Barbara: [in a breathy voice] Just throw them anywhere. I won't be needing them 'til morning.

Miss January: Well what shall I do with the costume?
Matt Helm: Drop it in the ashtray.

Linda: It's not a gun, Mr. Helm. It's the new weapon they gave me, developed right here in our labs.
Matt Helm: Developed pretty well, too!
Linda: May I point out...
Matt Helm: You already do!
Linda: ...that that's why you're here. To become familiar with our latest equipment.
Matt Helm: You right. An agent should always keep *abreast* of the times 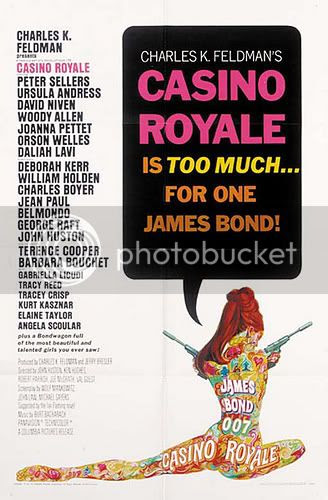 Casino Royale stars a huge cast  that includes  Peter Sellers of Inspector Clouseu fame  playing one of the many 007's in the film… This wild comic look at one of the James Bond books is a blast..…It is a wacky fun filled ride filled with silliness and hotties galore and an amazing musical score.
A Great line by  David Niven as 007
"It's depressing that the words "secret agent" have become synonymous with "sex maniac."
Hey when surrounded by girls like Ursulla Andress--what great spy wouldn't be. 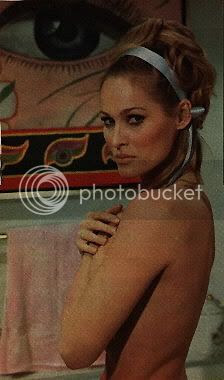 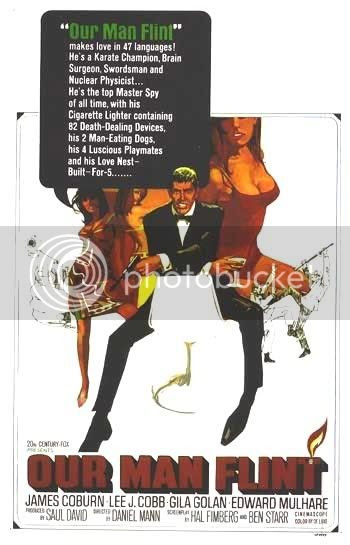 In Like Flint 1967 7
With the success of Bond everyone was quick to follow with their own attempts at Spy success and this was one of the better ones....Coburn brought  American Spy  Derek Flint to the screen with unique flair.  The lanky mainly supporting actor was perfectly cast in the role of America's  answer to James Bond  Flint didn't just have one girl like Bond  --they gave him 4 or 5  "Now Can i have a hareem?"    And seemed to have a mix of Sherlock Holmes about him as well. 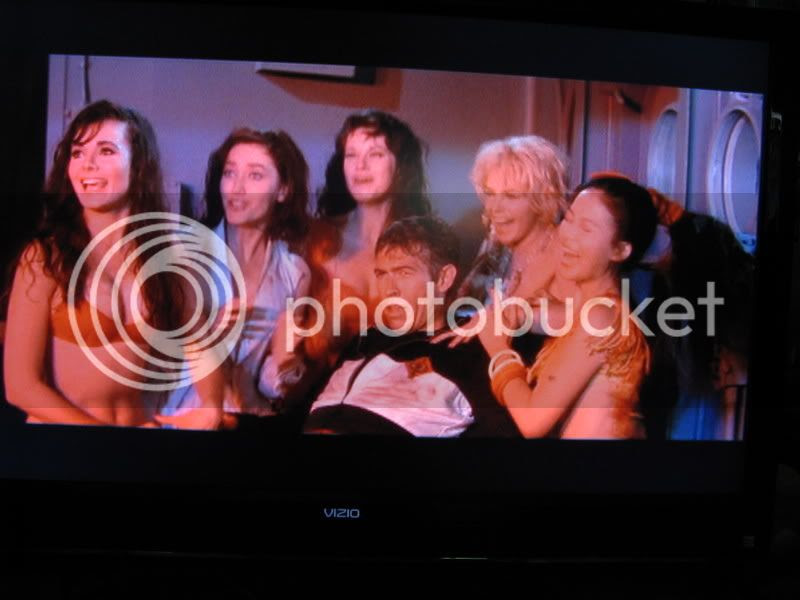 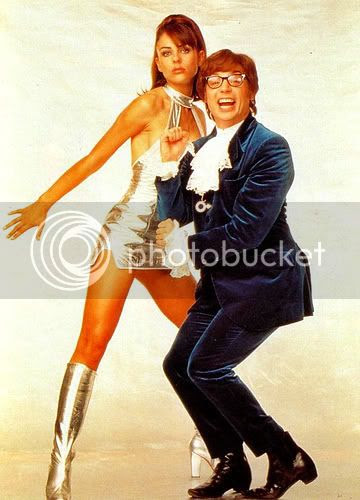 The  Powers  movies were as much a homage to  Flint and Helm as they were a spoof of  Bond it even uses the same distinct telephone ring from the Flint series) and Austen Powers as a photographer is straight out of Helm  as are the dim witted underlings to the brilliant   Blofield like bond villain.   Mr  Evil....(I mean Dr Evil)
"It's Dr. Evil, I didn't spend six years in Evil Medical School to be called "mister," thank you very much" 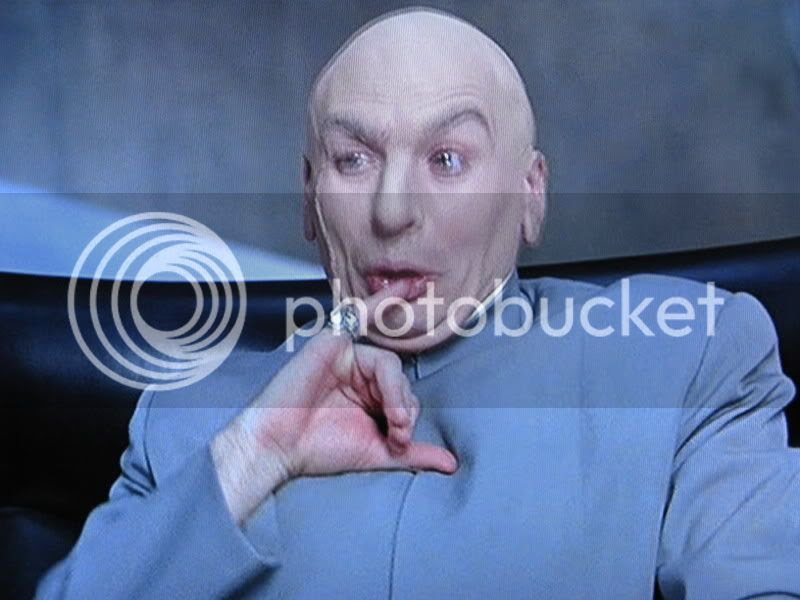 Here are some of my favorite lines that demonstrate some of the best parts of the Powers series..

Dr  Evil  "is it too much to ask to get some sharks with freaking lasers on their heads?"

Dr Evil --"Ladies and gentlemen, welcome to my underground lair. I have gathered here before me the world's deadliest assassins


Dr Evil Hilarous backstory
The details of my life are quite inconsequential... very well, where do I begin? My father was a relentlessly self-improving boulangerie owner from Belgium with low grade narcolepsy and a penchant for buggery. My mother was a fifteen year old French prostitute named Chloe with webbed feet. My father would womanize, he would drink. He would make outrageous claims like he invented the question mark. Sometimes he would accuse chestnuts of being lazy. The sort of general malaise that only the genius possess and the insane lament. My childhood was typical. Summers in Rangoon, luge lessons. In the spring we'd make meat helmets. When I was insolent I was placed in a burlap bag and beaten with reeds- pretty standard really. At the age of twelve I received my first scribe. At the age of fourteen a Zoroastrian named Vilma ritualistically shaved my testicles. There really is nothing like a shorn scrotum... it's breathtaking- I highly suggest you try it.


And the scene in every Bond movie where of course the villain explains his evil scheme and then leaves the hero spy in a situation they can escape from.
Dr. Evil: All right guard, begin the unnecessarily slow-moving dipping mechanism.
[guard starts dipping mechanism]
Dr. Evil: Close the tank!
Scott Evil: Wait, aren't you even going to watch them? They could get away!
Dr. Evil: No no no, I'm going to leave them alone and not actually witness them dying, I'm just gonna assume it all went to plan. What?
Scott Evil: I have a gun, in my room, you give me five seconds, I'll get it, I'll come back down here, BOOM, I'll blow their brains out!
Dr. Evil: Scott, you just don't get it, do ya? You don't.

And this great exchange between Austen  and Vanessa

Well that just touches the surface of some of the Spy genre ---(mainly the spoofs)   I could go on about the  amazing  TV Series The Prisoner for hours but it didn't  really fit in with this bunch..

So check them out if you haven't already and enjoy..

Email ThisBlogThis!Share to TwitterShare to FacebookShare to Pinterest
Labels: Austen Powers, Get Smart, In Like Flint, Reviews, Spy Movies