For every great movie series there are the movies that are made to dip into the bucket that they create…That feed like a succubus off of there success.. For every Star Wars there are the Ice Pirates of the world …For every Harry Potter there are the other cheaper  fantasy movie knock-offs-----For every Die Hard there is a Sudden Death (Die Hard at a Hockey Game)….Some are successful in there own way --others "Not so Much"...

After seeing The Mummy: Tomb of the Dragon Emperor 2008 8 out of 10 (a successful follower –yet not quite Indy bucket dipper) and the Direct to Video Alan Quatermain and the Temple of Skulls (Not so much) I thought I'd throw together a quick look at some of the films that came as a result of Dr Jones success early success 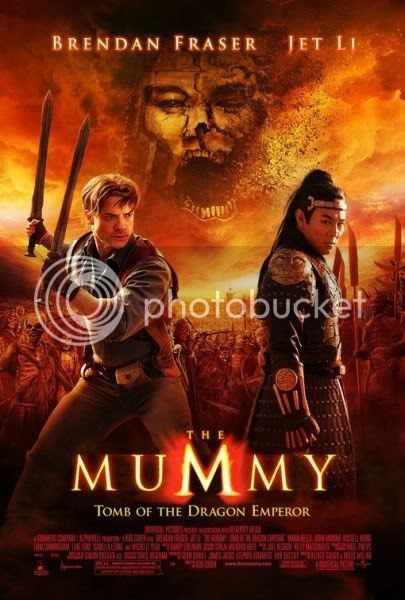 Sure Universal can consider it a reboot of its Movie Monster franchise of days gone by----but it is much more inspired by Indiana Jones than anything with Boris Karloff. From the moment they cast George of the Jungle – 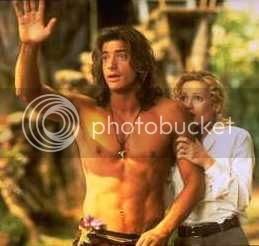 this movie series was obviously going for a sillier campier feel and it suits it just fine…The Mummy franchise is what it is----Summer Popcorn with extra butter….."A little cheese with your nachos"…..So in the few moments I cringed during a couple of scenes in Kingdom of the Crystal Skull (which although 4th  as far as the Indy films go I still loved it ) like the embarrassing too much CGI Tarzan and sword fight scenes…..In the Mummy 3 I expected this sort of cheese from the start.
Ok people if Indiana Jones had Yeti's drop kicking soldiers over a building making a field goal gesture followed by a "Yeah" fist pump----you would have cried bloody murder…But when Encino Man is your lead actor somehow it is alright…. So the Mummy films are an enjoyable dip into the post Jones bucket... Sure it is silly----kinda of like Alan Quartemain (the Richard Chamberlain version) if it had a huge CGI budget.   Well too much of a CGI budget The Mummy's one drawback is too much CGI  --and overuse of it just because they have the budget...
So Rick O'Connell --you are no Indiana Jones….but I like your campiness

….To call this Indy coat rider low budget—would be to say that it had "A Budget" at all…..Avoid anything by Asylum Films----(seriously –this was a stinker) and not a so bad it is good stinker---just plain dull crap…The action scenes looked like they just came up with them on the fly—if you can call the bathtub shootout and the slow moving tourist train pursuit action scenes….Oh but there was a well choreographed Hug (or wrestle finale) --oh never mind it was crap to. This movie was so bad I had to check out the DVD EXTRAS -(don't ask why) The Making of The Temple of Skulls was entertaining as the director talks about the small budget they had (No Really! A small budget I never would have guessed) ---and how they were trying to make a timeless classic (No he actually said those words I'm not kidding)…..Intrigued by this little bit from the Director I had to delve further --This DVD actually had a Commentary track…So as I went to bed I listened and fell asleep to the echoes of the phrase "It was unfortunate" over and over again as they discussed this dreadful film…That was all I could take as I drifted off to sleep thinking if this movie can get financed by someone—Then The Pineappleman should be a movie….I could do better really.   Here is the trailer for this  mess of a film  They should have let the Trailer editor cut the whole movie down to 1 minute
http://www.youtube.com/watch?v=fDv0aptaj24&feature=related 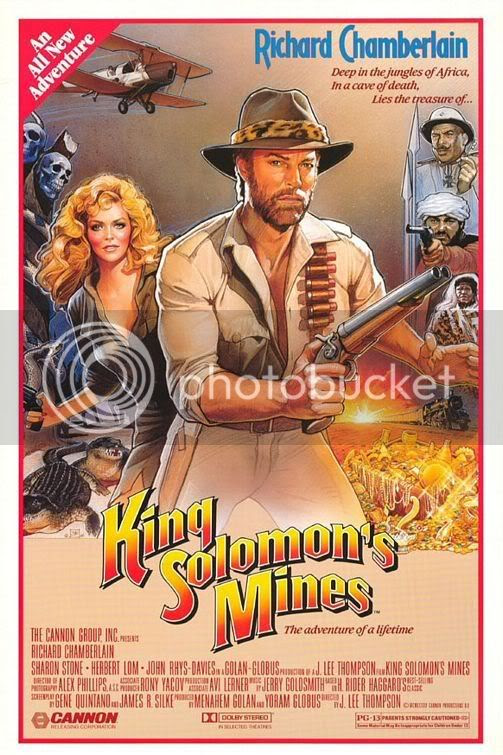 I actually enjoy the cheesiness of the first of these 2 flicks….and its corny low budget attempt at being an Indy wannabe..Richard Chamberlain is cheesy….Sharon Stone (back when she looked cute) screams her way through the whole picture –the action sequences are cheesy as hell and funny) good quality camp…..Here is a clip of Sharon's bad acting doing her best Willie Scott impersonation.  In this cheesy --extra  cheesy scene..
http://www.youtube.com/watch?v=cllORqZowgk

The Lost City of Gold is like its retarded brother ---If the cheese in King Solomon's Mine wasn't cheesy enough than this silly and less entertaining film is covered in the Nacho Sauce (I'm hungry now for some reason) And Stone's screaming has gone from (she is so hot) too kinda of annoying.
Here is the Trailer for the lame sequel
http://www.youtube.com/watch?v=jWb2OjlCZgg

Alan Quatermain you sir are no Indiana Jones… 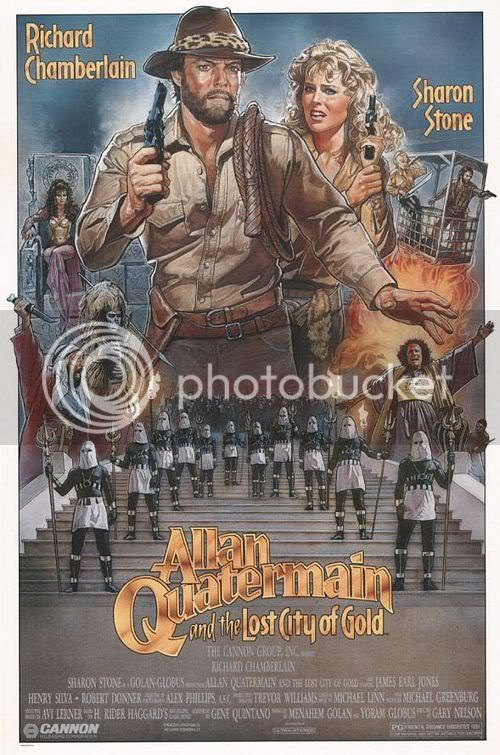 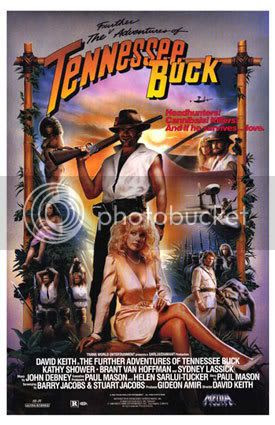 has only one redeeming moment which includes the female star (I mean Playboy model  Kathy Showers) getting what we forever would call "The Greasing" ny natives as they readied her for the tribes chief that had captured her….Still even with the infamous "Greasing" Scene this turkey was stuffed with boredom….Tennessee Buck ---you sir are no Indiana Jones and thankfully your previous Adventures never happened….The Further Adventures my ass…. (The Pineappleman would be 15 times the film this stupid movie was)
Here is the Trailer to the movie with the "Greasings"  God  I think we actually saw this shit in the movie theater...Starring  David Keith  --what were we thinking..
http://www.youtube.com/watch?v=2eidq9NnKQU
Posted by brad chowen at 8:22 AM