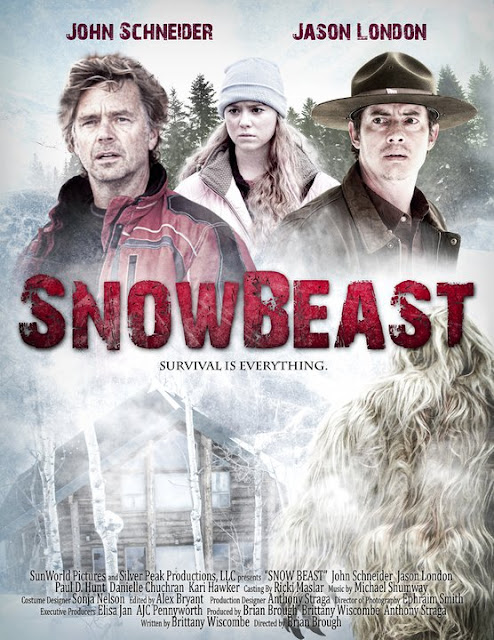 Starring John Schneider (of Dukes of Hazard fame)  as a researcher trying to research the Canadian Lynx.  Instead he stumbles across  the worst  looking Yeti or Bigfoot to be put on the screen since silent movie days.  I'm so used to cheesy digital monsters these days that when a movie goes old school and puts a man in a rented  white Yeti/ Gorilla costume where the zipper is visible in the back and has him rolling around on skates in the background it is really shocking.   The movie is really dull with boring dialogue scenes between John Schneider's character and his daughter as he repeatedly tells her to stay behind...and then scenes of the silly man in a gorilla costume  that could have been used in an Ed Wood movie attacking people.   The researchers couldn't even guess what made those  ape like tracks in the snow----really?  They are animal researchers and they mistake Yeti tracks for possibly a bear?   This movie  was just really --really bad and John Schneider is gathering a pretty impressive list of cheesy +Syfy  movies including 2 bad shark films, a terrible Yeti movie and an Ogre film.....and I haven't even seen him in Return of the Killer Shrews yet.

Oh here is the exciting Snow Beast --that looks like they glued some horrid mask on a gorilla costume. 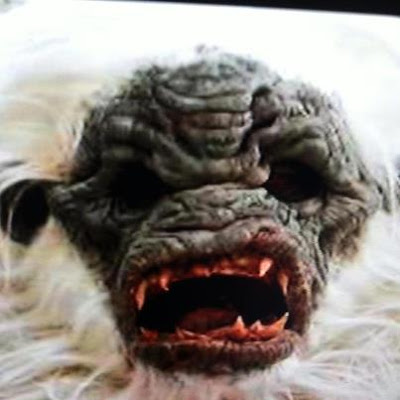 When I first think Abominable Snowman I think of the  silly character from the Ruldolph the Reindeer stop motion classic,  definitely not some killer half wolf looking creatures that flash across the screen so fast you can barely see them.   That is what we get in this movie.  A guy returns to the moutain that his dad died on years ago to take out the snowy bastard that killed his dad.    Not a great plan.   When he gets lost his sister and a bunch of military friends go up on the mountain in search of him  (or for a snowboarding trip---it is really unclear since their search includes skiing without much of an actual search).   Well they find him and some Abominable friends and a battle for survival occurs with several bloody digital deaths.  As Yeti movies go I've seen much worse.....(Snow Beast,  Rage of the Yeti,  the list goes on)  The Abominable Snowman wasn't good---but as I continue to search I've haven't seen a good Big Foot/Yeti movie yet.....and thanks to Syfy the search will probably continue for quite awhile.   As the trailer says,  "What exactly are we dealing with here?"  Apparently  yet another bad Yeti movie.