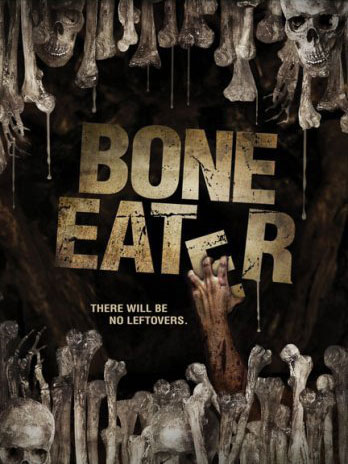 What do you get when you cast Tron, Buck Rogers,  Checkhov from Star Trek,  and the Greatest American Hero in a movie with a cheesy digital Skeleton????  You get a cheesy sci-fi movie with a digital skeleton .  The digital skeleton has horns like Darth Maul and one touch from him makes humans digitally disintegrate.  It breathes green mist and rides a ghost horse as it murders everyone in sight.   The movie was shot up near Bishop and Lone Pine  (gas stops on the way to Mammoth Lakes) which once saw a lot of filming in the Alabama Hills back in the Western movie days.
There is even a Movie museum there that is worth checking out if you every make it up that way and are a Western movie fan.
Here is a blog about the museum I did awhile back.
http://bradgeekness.blogspot.com/2011/05/lone-pine-film-museum-november-2007.html

Okay back to the Bone Eater or The Cheesy Skeleton as the movie could have been called. 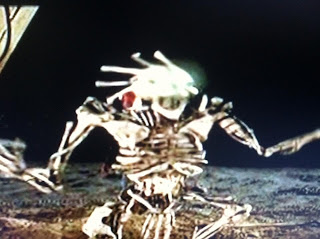 The Sci-Fi start heavy cast mentioned at the beginning really adds nothing to the film.
Checkhov and William Katt just have cameos as minor characters and Gil Gerad (Buck Rogers) looks so old I didn't even recognize him until half way through the movie.   Bruce Boxleitner actually does a decent job as the  half breed  sheriff of the small town where all of these bad digital skeleton killing takes place....  A lot of people die in cheesy fashion until Bruce finally gets in touch with his half breed Indian roots  puts on some war paint and walks out into the middle of the highway   to take on the Skeleton on a g  with some special Tomahawk in  (Spoiler Alert)  one of the most anti-climatic battles in movie history.

Bad quote of the movie  " You hear so much as an owl fart  --shoot first and ask questions later"    Classic....