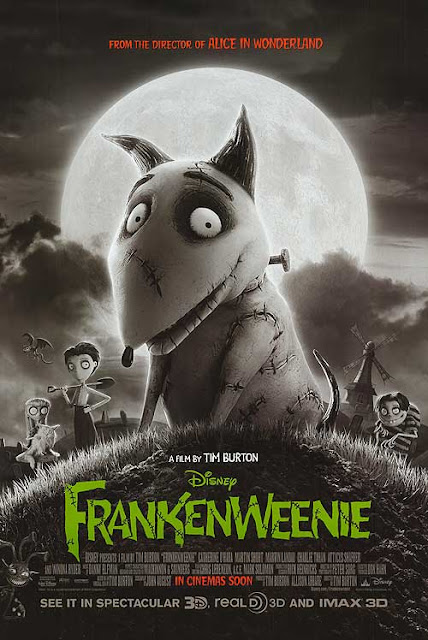 I just recently reviewed Dark Shadows---which was quite possible one of my least favorite of Tim Burton's films.   Well  Frankenweenie is probably one of his best.  Tim Burton has recreated his  1980's short film into a fantastic and beautiful black and white  stop motion masterpiece.  Capturing the magic of Nightmare Before Christmas once again with stunning visuals and great storytelling.  Sparky is by far the cutest re-animated dog I've ever seen.  The animators were able to create a wonderful little dog  that the viewer will fall in love with.    The film has a Danny Elfman soundtrack (of course)   which adds to the greatness of the film and the ending is action packed.   I suggest also watching the original black and white live action short Frankenweenie that inspired this feature length version as well.    The one thing I love about Burton is his visual style which is uniquely his own.   Even a so-so Tim Burton film will look amazing... so all Tim Burton films  from a visual standpoint are worth seeing.    When you can match up those visuals with a great story and characters you care about the result is pure gold.     I would rank it just below Nightmare Before Christmas which was a 10 out of 10.

Here is another blog I did about the Frankenweenie exhibit that toured the country when it was in DCA last fall as well.  This exhibit had some excellent samples of the puppets used in the film.