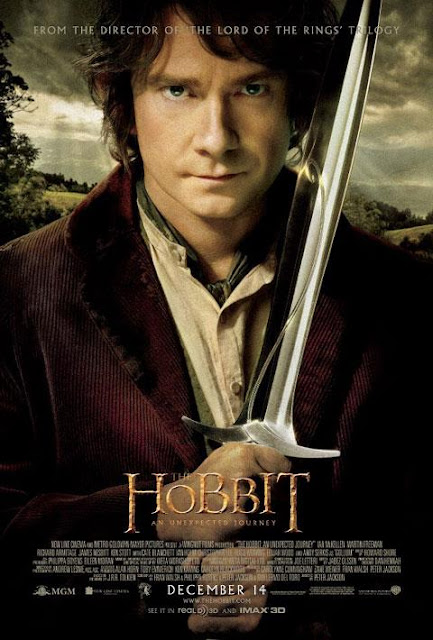 When they first announced that they were going to be making The Hobbit I was thrilled.   The Lord of the Rings trilogy was an epic piece of work that changed the scale and possible scope of fantasy films and what could be done.   Anything was now possible in the Fantasy world.   From Harry Potter to Chronicles of Narnia....to remaking Clash of the Titans... none of which quite got it right as good as Lord of the Rings.    The Hobbit however was basically a children's book that didn't have the same epic nature of the Rings Trilogy.   How  would balance they handle  this difference against the expectations set by the other three films?

Well I finally got my answer this past weekend.   I was quite possibly the last person in Middle Earth to see the film.   It had a much lighter tone and sense of humor that wasn't in the Lord of the Rings series and  since they basically turned one book into three movies it took The Hobbit a bit longer to get into the main story which follows Bilbo Baggins on an adventure away from The Shire to see the world as a part of a group of Dwarves and Gandalf the Wizard to reclaim their homeland from a Dragon.   Even with the lighter tone of the film it quickly brought you back into the world of Middle Earth that was captured so well in the previous 3 films.   The movie had the typically great scenery from all over Middle Earth  (New Zealand such a beautiful country).  The music and epic nature of the film took over by the third act.  Some of the action was way over the top  (like Temple of Doom over the top),  but still really exciting and fun.    The scene with Golem in the cave where Bilbo finds the ring was perfect and couldn't have possible been done any better.

Being only the first portion of a 3 film series it did feel that way,  much more than say the Fellowship of the Ring did,  but I'm definitely along for the ride as far as Middle Earth will take me.    I would rank this one probably 4th among the Tolkien films,  simple because of the more childlike aspects of The Hobbit itself ---but it is definitely worth the journey.

Email ThisBlogThis!Share to TwitterShare to FacebookShare to Pinterest
Labels: Fantasy films, J.R. Tolkien, Lord of the Rings, The Hobbit