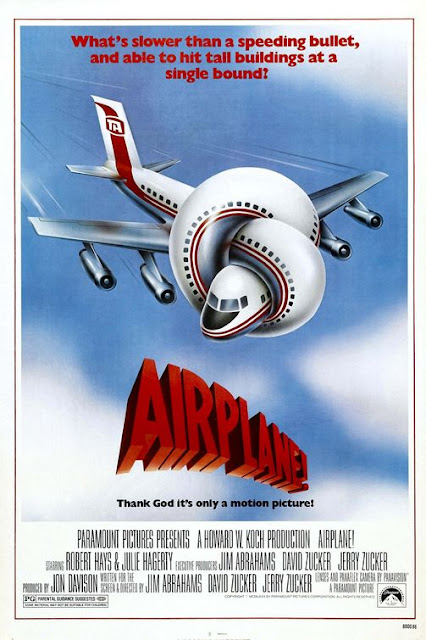 
This is my countdown of Spoof movies that are in the Airplane genre....I'm not including films like Austen Powers  (which I love) or the Mel Brooks movies....I'm talking the specific Airplane Style spoofs which is kind of like its own genre....
1. Airplane   1980     10 out of 10
The best spoof movie of all time and one of the top comedies of all-time...they played around with the genre with The Kentucky Fried Movie and perfected it here with a cast of serious actors playing it seriously in a movie that is a totally spoof of the serious movies they used to be in.....It changed Leslie Nielsen's career forever...The standard by which all its predecessor's are judged against...

2. Naked Gun   1988  10 out of 10
The TV series  Police Squad was brilliant and ended way to soon...So happy when it found its way to the big screen for 3 films of which the first is best.   I take special pleasure watching it now and seeing the beating Norberg (OJ) now takes.


3. Not Another Teen Movie   2001   9 out of 10
Being a fan of the John Hughes film this flick really captures and does the Airplane style spoof genre proud in skewering the teen high school genre.  The character intros alone are totally classic.