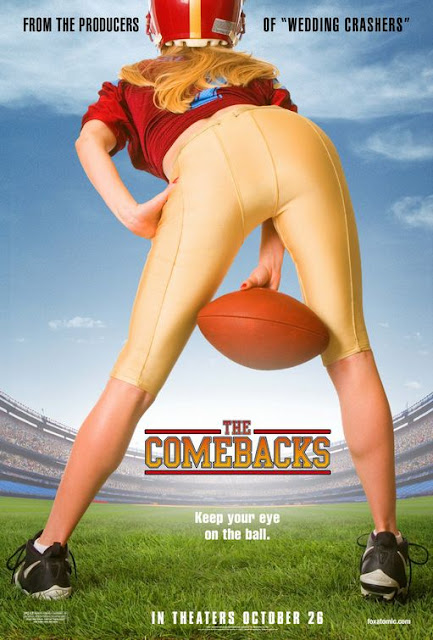 The Comebacks is a  sports spoof of practically every single Football movie you can think of .....and a few other sports films as well....(here is a list of a few movies it parodies.....Bend it Like Beckham...Blue Crush..Field of Dreams ...Invincible...Miracle...Remember the Titans..  Radio...Rudy...Hoosiers...Friday Night  Lights just to name a few.   The Comebacks was a decent but not great spoof film.....It had some moments --mostly thanks to the talents of  David  Koechner (of Anchorman fame) as coach Lambeugh Fields....A down on his luck  terrible coach given one last chance...  One of its strengths is sticking to an actual plot which many in this genre seem to lose focus on.    The film has some decent jokes  like David Koechners' pack with his team to do worse in school and party and get in trouble.....But there is nothing really great to propel this film into a higher status among Spoof films.
Spoof films were once one of my favorite genres....Classics like Airplane,  and Police Squad, The Naked Gun movies and Hot Shots --were among my favorite movies....Then came all the made imitators that thought that thought that just putting someone in a Jack Sparrow outfit  and having him stumble around counted as a spoof.   Or the habit of too many kick to the crotch jokes or too many current news references that won't hold up over time  (like the bald Britney Spears getting kicked into the Spartans pit in the awful  Meet the Spartans).  Current references may get a laugh today--but won't hold up over time and in most cases like Meet the Spartans --don't even get a laugh from me now.    We discuss this genre in the latest Senseless Banter podcast that we recorded today that should be out soon.   The Death of a Genre---for me...  I only gave The Comebacks a chance because of the podcast topic....Which also included watching Scary Movie 3 and 4 which I will reviews later.    Here is the trailer for The Comebacks

One of the best quotes is in parody of  Invinceable
Vince: Hey coach. Name is Vince. I'm just a bartender from Philly whose only dream is to play ball. It's all I got left after I lost my job teaching, and my wife left me. Like my alcoholic father used to say before he passed on, "A man can only take so much failure!" I'll give you everything I got. What do you say coach? Lambeau "Coach" Fields: I say you can add "Did not make the football team" to your list of woes.

Email ThisBlogThis!Share to TwitterShare to FacebookShare to Pinterest
Labels: The Comebacks