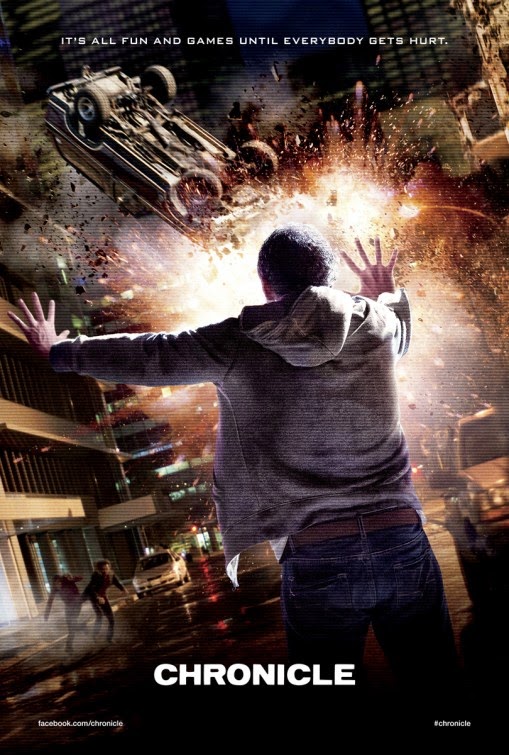 Star Wars news has been coming fast and furious lately.  It is hard to keep track of all the breaking news.  When it was announced that Josh Trank would be directing one of the new Star Wars Spin offs ----all I could think was " Who the hell is Josh Trank?"   I wanted to to hear names like Joss Whedon  or Spielberg...not Josh Trank.    I immediately looked him up and noticed that he had directed Chronicle a sci-fi movie in the lost footage genre that focused on a story about three high school students that make a discovery in an underground cave while attending a barn party.  The three kids end up with mysterious super hero like powers.  I had put this 2012 movie in my Netflix queue awhile back, but hadn't gotten around to watching it yet so the Star Wars connection moved it to the top of my queue.

The lost footage style of the film seemed forced as usually, but the story of these three friends discovering and learning how to use their new found powers was excellent.  I had thought several years ago that if I ever wrote an invisible man story it would be based on how having these powers could break down a persons o mortality and this film did exactly that with super powers.  We get to see the main characters at first having fun with their new powers in childish ways that most teenagers in reality probably would. They test their powers in the backyard and then play pranks on people at the grocery store as their powers grow.   Of course their goofing off leads to someone getting hurt and they then must discuss that they need to establish rules for how they can use their powers.  It was a strange film that really got into how having these powers would effect someone in the real world.  I absolutely loved the story and how it went down.  Definitely one of the better lost footage films I've seen so far.

The Star Wars Spin off connection:
I now know who Josh Trank is and if his handling of the Jedi like abilities of the characters in this film are any indication of what he may be capable of with a Star Wars spin-off then I'm all in.  The movie was excellent and really got into how a person could become in touch with his darker side with just a little nudge here and there.   A normal person could keep his morality --but someone with super powers may have a harder time walking in the light side of the force.   I would have liked to see Josh Trank's take on the fall of Anakin after seeing this film.    So well I still hold out hope that Whedon will one day get his hands on a Star Wars film.....for now ..I'm excited to see what Trank brings to the table


my movie facebook page is here
https://www.facebook.com/pages/The-Super-Fantastic-Terrific-Page-of-Movies-TV-and-Entertainment/178708865473822?ref=hl&ref_type=bookmark
Posted by brad chowen at 11:32 AM