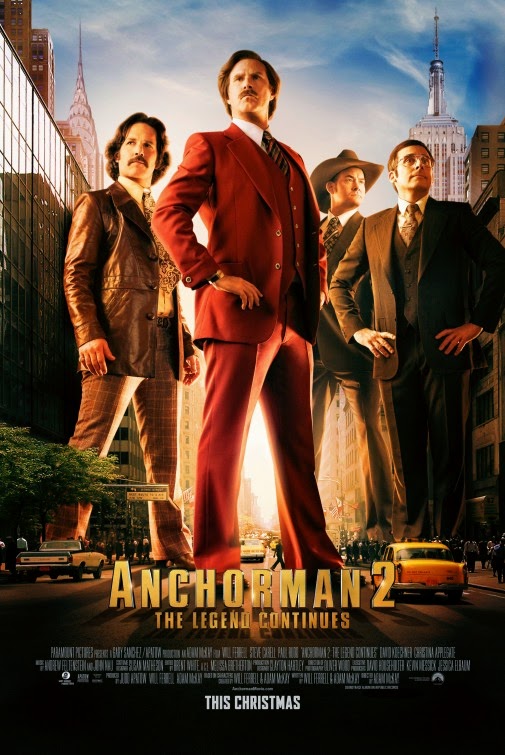 The Movie
Anchorman 2 was an a really mixed bag of a movie.   As a full movie is was a little underwhelming and typical of a comedy sequel that doesn't live up to the expectations of the original.  It was a very silly film with a plot that was really unimportant to the experience or enjoyment of the film.   Some moments in the film were just plain dumb,  other moments were laugh out loud brilliant (like the Cruise control RV crash).  So despite it flaws any comedy in this day and age that can make me laugh out loud has done something right.  Too many modern day comedies feel like a bunch of unconnected sketches and Anchorman 2 suffers from that as well. The only recent movie that succeeds for me in having a fully functional 1980's era comedy plot was We Are the Millers.

How to rate this film?
It is really hard for me to rate it.....I remember the first time I watched the original Anchorman and gave it a 6 out of 10, but like many other Will Ferrell movies.... it grew on me to eventually be a 9 out of 10 and a comedy classic.   Will Ferrell just makes me laugh for some reason  (unlike say Jack Black).   Even in a bad SNL sketch--he found ways to shine and as a result this film will probably grow on me as well,  despite its not having a quality plot  and re threading on much of what it had already done in the original.  The star studded newscaster battle was great in the original and just fell flat for me the second time around.  It was a very inconsistent film and yet its high moments help to wash away some of its really dumb moments when reflecting on it a day later.
So for now it gets a 7 out of 10 for me.....

The DVD
The DVD definitely enhances the movie.  The menu screen is super funny ---watching the stars doing bad disco dancing (Carrell kills it with his lackluster dance moves.)   The gag reel is almost more enjoyable than the movie itself.  Watching the extras it definitely looks like the actors truly enjoyed making the movie.  I haven't even dug into half of the extras yet---but with all the different improv lines and behind the scenes features, it is definitely on its way to being a great DVD and definitely worth buying for any Will Ferrell fan.