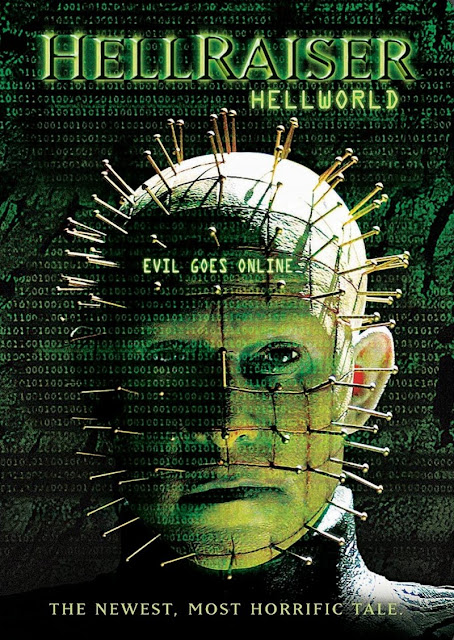 To be honest I have no idea how this movie series has lasted nine films.   Hell Raiser: Hell World is the 8th movie in this horror franchise.   This one in the series has a twist that Hellword is now an online game.  Some players whose friend died years ago after playing the game too much get invited to a HellWorld party by earning invites online.  They go to a spooky mansion that has a weird and wild party going on.  Lance Henriksen (of numerous B Movies and Alien fame) is the person apparently throwing the strange party.

Like the franchise in general the concept behind this particular film starts out with a cool idea ---but then doesn't really live up to its potential.   Pinhead and his gang or used sparingly in the flick as Lance Henriksen seems to be the real villain.   I was starting to get bored of the flick about an hour and 15 minutes in and was about to write it off as just another wasted HellRaiser movie gone wrong,   but then it started to get a little weird that things weren't quite like they seemed.  The movie had a couple of weird twists that sort of redeemed it a little for me at the end.   Unfortunately ---just like the entire concept for the franchise----it could have been a lot better.

While researching the series for this blog I learned hat Clive Barker was really only involved with the very first film.   It is a shame that he didn't have influence over the series as it could have been much better than the mediocre series it became.  Clive Barker has a cool and twisted vision.  A sort of  demented H.P. Lovecraft vibe that could have been a lot better on screen.   I wish Lord of Illusions had received a followup and the concept of HellRaiser could have been executed better.