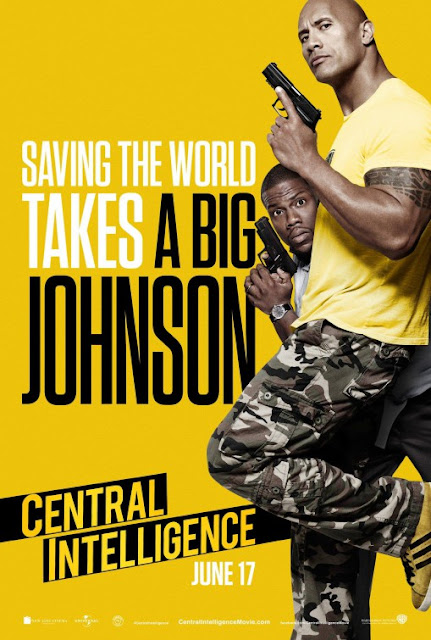 Central Intelligence is a good buddy cop adventure starring Kevin Hart (playing himself as always) and Dwayne the Rock Johnson.   The plot is silly and The Rock's character (despite being kick ass is odd throughout the film, which was a strange choice.  They almost lead you to believe he is faking how his character is a first---but it turns out that isn't the case.

A 20 year reunion is approaching and an old class mate know back in the day as  Geeky Outsider named Fat Rob contacts Kevin Hart's character who was the ultimate athlete student back in the day for a drink.    The flashback to The Rock singing in Fat makeup is probably the best part of the flick.   I think and entire movie with Fat Rock would have made a better film    Anyway.....Fat Rob is now kick ass Rock a CIA Agent gone Rogue and unknowingly enlists the help of his old classmate.  The two end up embroiled in CIA Espionage situation situation.    The movie has some good action sequences and chemistry between The Rock and Kevin Hart clicks.   The movie had some funny moments.  The Rock  even in a odd character role) can make any action movie enjoyable.

(Spoilers)
The weak point of the movie was the attempt to try and convince the viewer that The Rock may be the bad guy after all....This red herring just never works and as much as they try the viewer never really buys into this angle.   The Rock is too likeable in the the film for the viewer to want to buy into that and so the tension you are supposed to feel in certain scenes isn't really there.    I loved the references to Sixteen Candles which is supposedly The Rock's characters favorite flick.

A decent buddy cop film worth a rental.