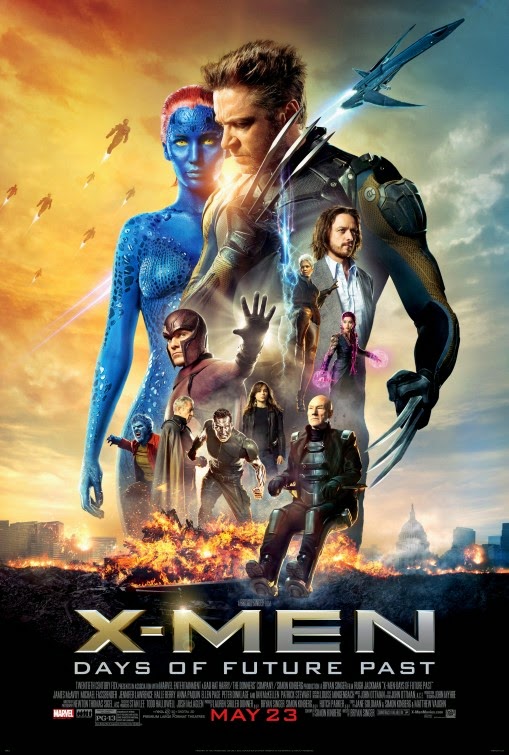 The latest X-Men movie –seemed less a movie and more of an attempt to reposition the X-Men universe going forward which is a shame.  I actually liked the previous prequel story.    It is like the executives gave the writers an order to incorporate the younger versions of the characters introduced in the most recent film with the older versions that included Patrick Stewart and Ian Mckellen.   They must have also had orders to find a way to add Wolverine to the mix….The most popular X-Men character that was basically absent from the last picture. With Days of Future Past–they have basically said ---screw what we have shown you previously.   Professor X who –died  in Last Stand is alive in this movie with no explanation and time travel....really -what is this Star Trek?

The movie starts in a near apocalyptic future where the mutants are being wiped out by some super robots that can take on their abilities.    They decide to send Wolverine back in time in to his former self to try and stop the events that lead to this situation.  By doing this the producers accomplished their goal of having both casts in the movie and making Wolverine one of the main characters.    The movie focuses on Mystique trying to kill the guy that creates the Sentinels and Professor X  convinced by Wolverine trying to stop her.  They also enlist the help of Magneto who they spend part of the movie breaking out of a high security prison  (bad idea).    Magneto ends up trying to make things a lot worse….(what a surprise)….In the end  Professor X prevails and Wolverine wakes up back in the future at X’s school having changed the future and nullified many of the events of previous X-men films.  Certain characters that had died are now alive again to position them to do what they want with the franchise going forward.

The movie had some decent action sequences and the acting was good, but the plot was just underwhelming and the whole movie just felt like an setup of episode of the TV series rather than a stand alone movie.  The plot seemed unnatural.  Certain characters were in the movie just to have them in the movie like Storm.   They ignored certain events from past movies--while basically using the entire film to setup the X-Men going forward in an alternate universe.  I found this aspect of the film insulting to the viewers of the previous films.

Check out the Den of Geek post about 11 Questions about X-Men Days of Future answered.