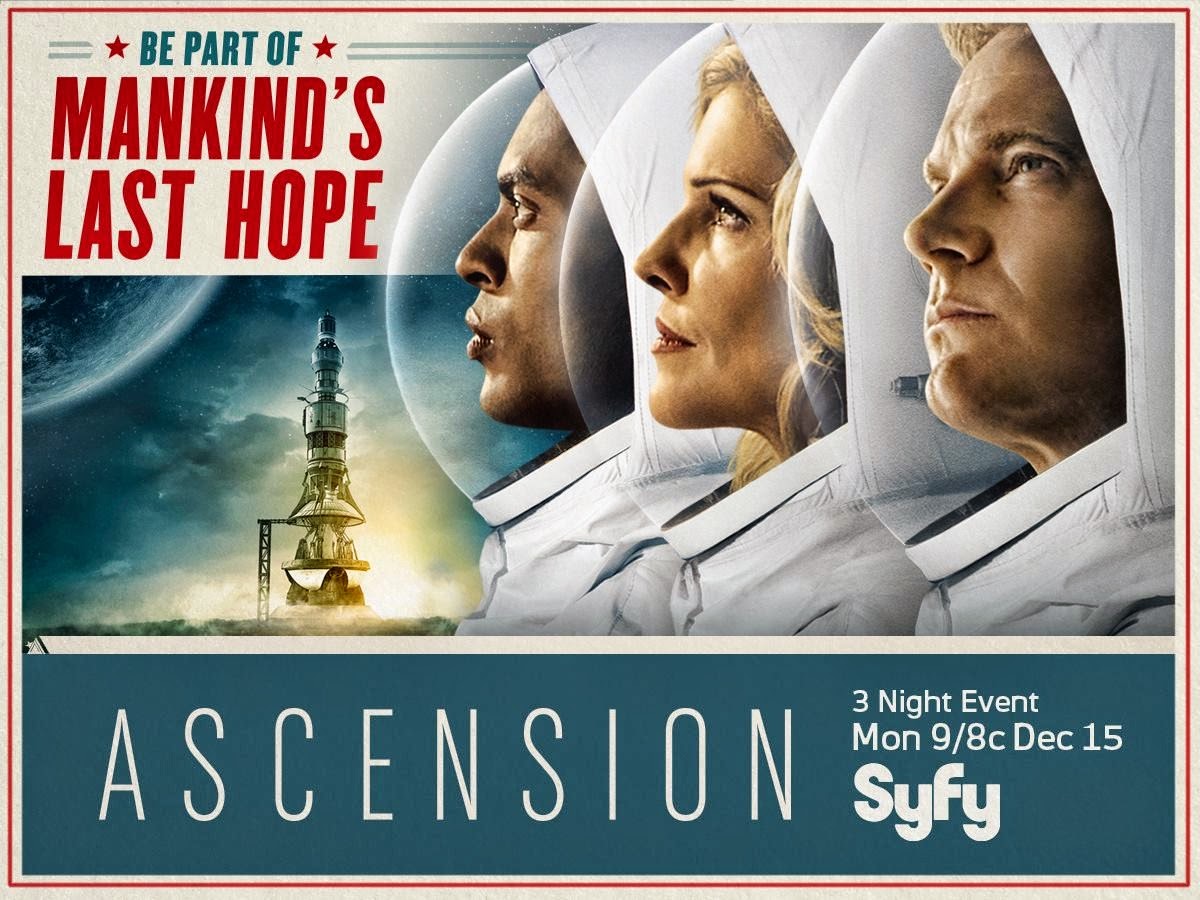 These comments are spoiler filled.

I was really looking forward to Ascension based on the trailer.
Ascension focuses on a Space mission that was sent to colonize Proxima Centauri.  So for many of crew of this 100 year long mission their entire lives would be on this spaceship never touching land.  The mission began back in the Kennedy era and the crew in style and form seems to be stuck in that era.  It seemed like a good idea and the first night of this 3 night miniseries was actually pretty good.  Here is a breakdown about what I thought of the miniseries Night by Night.


Night 1.
The story of the first night revolves around the first murder aboard the ship which in year 51 of its journey.  One of the top officers sets out to get to the bottom of this murder while the viewers get to explore the 1960's Mad Men type Playboy Club vibe of the spaceship.   There is also a storyline about modern day in which someone is looking into this secret mission and whether it exists at all.  The first night of this show was solid with interesting teases that something is going on with one of the kids aboard the ship  She  mentions that someone is watching them?   The show ends with one of the murder suspects battling the officer and getting shot out of the airlock.   This is where the first night ends with a huge reveal.   The spaceship isn't in space after all.  The entire ship is in a giant military bunker and the space journey is just an experiment run government.   This was an excellent reveal and had me excited for the next night.   Watching the character plummet into space and land in a giant stunt balloon was cool,  unfortunately the show descended after this pivotal event.

Night 2
After the huge reveal at the end of night 1 we settle into the concept that the entire space mission is basically the Truman Show  like secret government experiment.   It was a cool concept --but the show went downhill from there.   On board the ship they are all having sex and trying to find a saboteur and the little girl seems to somehow know that something is wrong about the whole ship.   The story on Earth with the secret government people is weak and deals with a consultant being sent in to report to superiors on the project, which was a dumb plot line that took away for the more interesting Ship storyline.   At this point the show starts to become a lot less watchable.  The girl that died is now a ghost and walking around the ship trying to show the young girl that seems to have psychic powers.  Meanwhile we are supposed to care random power moves that are happening aboard the ship --which really don't matter to the story.  The show doesn't really know what it wants to be at this point.  Is it a Dallas or Dynasty or a sci-fi show?

Night 3
By the third night --I was already starting to check out.  The charm and interest of this 60's style space journey was falling apart into both inside and outside the ship.  The government consultant decides to escape the project with the guy that had been "spaced" in a completely unnecessary storyline.   The dialogue and acting of the power struggle for the government people running the project was just terrible.  Meanwhile the Space ship's crew is dealing with a energy storm that was created by the "Firestarter" girl and her growing powers.  The whole experiment keeps getting close to being exposed including a broadcast of Alf showing up on one of the monitors and one of the characters questioning this.   It could have been a great series --turned into a really cheesy show by the end of night 3.   The government agents decide to extract the girl that has developed powers.   The acceleration of her powers is ridiculous.   A good concept was basically ruined by some bad story choices and awful dialogue and acting.   I started interested in what was happening on the ship and because the stuff on Earth was so terrible ---I ended up not caring much for the show at all by the end.  I really can't see watching the show if is does get picked up as a series now.