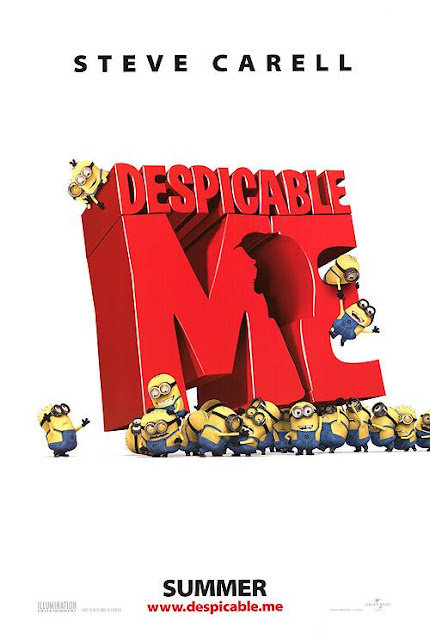 Despicable Me is a decent Animated movie starring Steve Carell of The Office fame as Gru a Super Villian and isn't as Super as he used to be. The movie definitely has its moments --but many of the best of them like the Willie Coyote style attempts to get into a competing Super Villains lair were already in the trailers. The little unexplained yellow Miniions of his delight children every time they are on screen with comic relief. It has a very similiar theme to Megamind (imagine that--because similiar animated movies never come out around the same time coughs under his breath....A Bug's Life and Ants). The movie is good but not great, the animation decent but not excellent, the story okay but not wonderful. I can't put my finger on what is missing -but once it ended I wasn't thinking about it at all really. Maybe it was because I had seen a Pixar movie the same week, or that I was still thinking about how I enjoy Tangled a little bit more my step daughter watches it. I can't see myself watching Despicable Me again. It just didn't have that magic that a Pixar or Disney Classic does. If you haven't seen it your kids will like it....But your kids are probably already trying to drag you out to that Smurfs movie too..... And like i always say..."What do I know?---NOT SO MUCH apparently since a Sequel is already in the works because of how much money it made. So in summary enjoyable but not memorable

For more about movies join my Facebook movie page