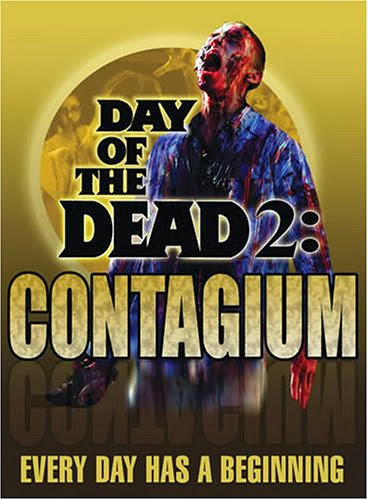 I recently posted a question on facebook asking how people would rank the top 5 Zombie movies of all-time.   Well let's just say that Day of the Dead 2:Contagium will not make the list.  This was by far one of the least entertaining, dull, silly and boring zombie movies I've ever seen.   I won't attempt to tell you what was good about the film, because I wouldn't be able to find anything redeeming about this flick.   It  focuses on a mental institution  that in the 1968 had a zombie outbreak as a result of an experiment into a chemical weapons.  The 1968 outbreak was contained, but the incompetent  government apparently could not find the one missing vial,  even though one of the modern day mental patients is able to find it many years later in broad daylight in a metal flask.    That is how this bad zombie movie starts.  They open it of course and start turning into weird hive mind like talking zombies with peeling skin.  One of them bites an evil hospital worker which begins the spread of the virus that turns everyone else in the hospital into typical zombies.  The plot was lame the acting was bad and silly and the zombies looked horrible (and not in a good way).   I don't know how or why this was able to use the title Day of the Dead 2 since it is not an official sequel to the original.   This movie is definitely at the bottom of any zombie movie list.   It was just a lazy and unispired effort.