Guy in Bigfoot outfit about to be brutal killed by a giant Bigfoot at a concert that should have been cancelled, but wasn't because of what I like to call the Jawa Scenario. 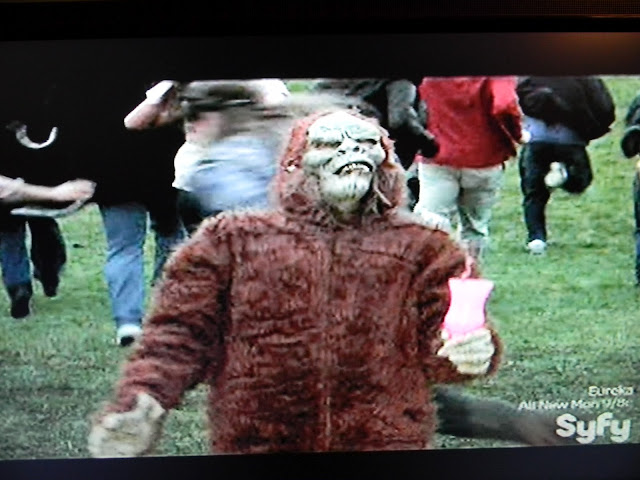 I'm now firmly convinced that there is no such thing as a good Bigfoot movie......I've tried---over and over again, but Bigfoot just doesn't make for a good movie....  Syfy's latest movie titled  Bigfoot  is no better than the rest.   They were going for the over the top cheesy (So Bad it is good) and it didn't make it to that status like Mega Python vs Gatoroid did.   It starred Danny Patridge and Greg Brady....(trying to copy the success of the Tiffany vs Debbie Gibson battle)---it also featured a old (looking for a paycheck singer)  Alice Cooper getting munched by a really hungry Bigfoot just like Mickey Dolenz did in the Snake vs Gator flick.....Just like Joey Fatone in Jersey Shore shark attack----apparently old out of work singers getting killed is a new horror movie cliche.
As for the plot.....(lol----sorry collecting my thoughts)   there was no plot other than a Giant Bigfoot that is having a really bad hair day impresonating  King Kong  (even climbing Mt Rushmore at the end ,  while Greg Brady and Danny Patridge  (recently both on Celebrity House Hunters) chase after him with different agendas.....This movie was laughable ---but not in an enjoyable way.   I should have enjoyed watching the  goofy digital  (way to big to be Bigfoot) crushing and kicking people all over the small South Dakota town---but alas I did not.  The movie also featured an old and not so hot anymore Sherilyn Finn and Howard (I thought he was dead) Hesseman.   I keep watching these bad movies in search of the occasional so bad it is good film....and mostly just get stuck with bad.....And Bigfoot just hasn't ever broken through.  Shame on you Bigfoot.  Finding an enjoyable Squatch film is just about as easy as Finding Squatch himself

Here is my old Bigfoot film blog which has some of the other bad Bigfoot films....
http://bradgeekness.blogspot.com/2011/07/great-yeti-blog-feb-2009.html