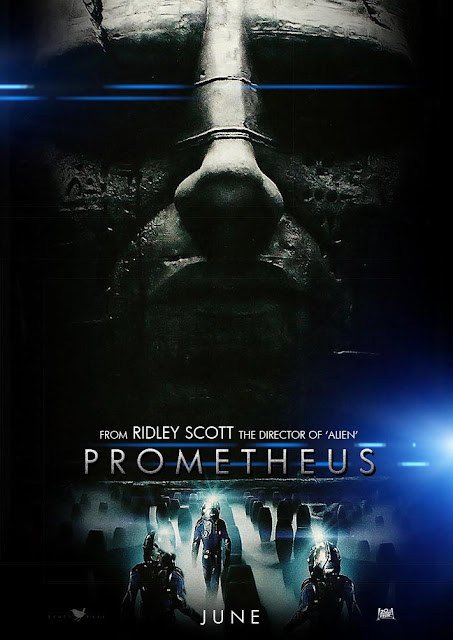 I was extremely excited to see the early teaser trailers for Prometheus. The Return of Ridley to Sci-Fi! How could I not be excited??   The man you brought us the space horror of aliens and the awesomeness of Bladerunner.  The man you basically set the design style of years and years of sci-fi movies to come.  That is why I was setting myself up to be slightly disappointed by the film.  It is hard to live up to classics (ask George Lucas and Spielberg about that).    Prometheus follows a familiar Sci-Fi plot of humanity's  search for answers and is a little bit of a mix of every Sci-fi movie that has come before it.  A team of scientists travel to space to answer the question of where we come from.....and end up what exactly getting the answers they seek.

The movie looked and sounded amazing.  We are definitely returning to the world of  H.R. Giger and Alien in this film (which they can't deny any longer).  It was part Alien,  part  2001 a Space Odyssey, part Bladerunner, and part about half a dozen other films.  The plot moves along fairly slow at the beginning in order to set up the characters for the horror that awaits them---which I felt was nicely done.  The problem comes in the type of story that it is.  Like an Arthur C Clarke novel it is all about asking interesting questions, but never really answering them in an way that truly delivers.    I've read a bunch of Arthur C Clarke books and felt the same way about most of them that I did about this movie.   A feeling like   ......Wow this is really, really cool and interesting ....I can't wait to see how it ends or how he answers the question.....never to really get that answer at the end of the book that I was looking for.   That is exactly how the movie felt.  A cool concept and cool delivery --but leaving you somehow not completely satisfied at the end.   It may be the fault of the film trying to use so much of what has come before it or simply the type of story that it was.  It obviously did a better job than the Star Trek movie where they search for god only to be really disappointed,  but somehow I was expecting a little more.  That being said it was still a good film.  It definitely had its moments. Ridley knows how to craft an amazing looking Sci-Fi film and loves his androids as a way to showcase humanity and its search for answers.

Email ThisBlogThis!Share to TwitterShare to FacebookShare to Pinterest
Labels: Prometheus, Ridley Scott, Where do we come from?