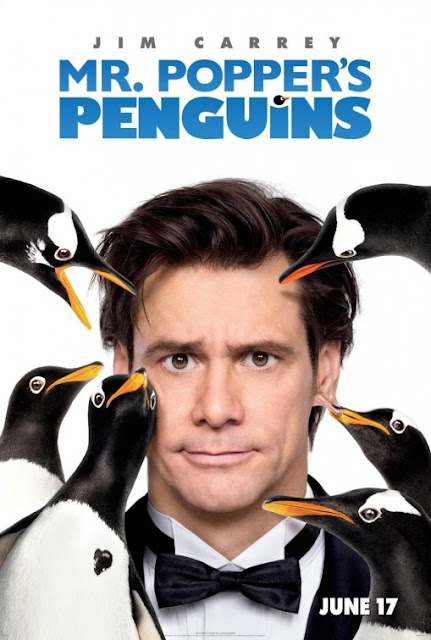 Mr Popper's Perfectly Predictable Penguins....  Jim Carrey doing his same old act--throwing in some random moments that could have been straight out of Ace Ventura.  The Penquins were cute....(even though they pooped on Mr Popper)   The kids laughed because all kids movies seem to have the fart joke or poop joke this days.  This story has been done before (without Penguins) it is basically the same old  Dad who is out of touch with his kids that learns a life lesson when his life is suddenly changes movie  (see Game Plan, or the Tooth Fairy ---or half a dozen other  family films).  And yes the Penguins are cute....(I get that) at least these Penguins don't bust out in a rap song like the dreadful looking Happy Feet 2 Trailer.   Penquins being cute is not enough to entertain me for an hour and a half though (I actually feel asleep watching it with the kids and had to finish it the next day).

Mr Popper inherits some Penguins from his out of touch with him father and the Penguins end up making him go a little nutty as he turns his New York apartment (that doesn't allow pets) into a Penquin playground.  He reconnects with his kids and his ex wife and everyone is happy.  The trailer pretty much perfectly sums up this predictable penguin movie.....And yes aren't they cute.  Awwww!