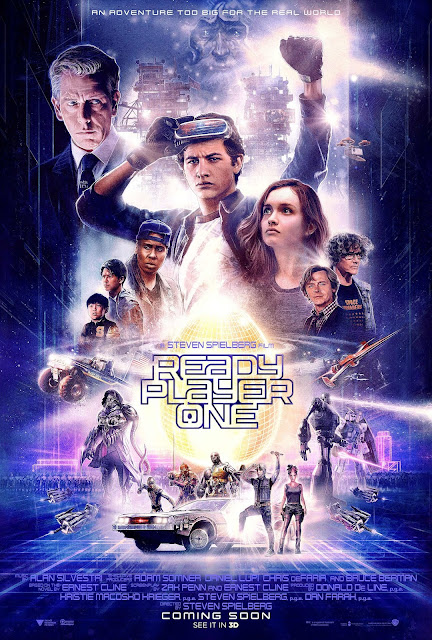 The concept for Ready Player One had me instantly interested in this film.  I had heard great things about the book from Geek Podcasts. It was described as the perfect adventure into 80’s nostalgia set in a Virtual futuristic world.  When Steven Spielberg was named as director the film instantly become a  front runner for one of my favorite flicks of the year.  A definite must see movie.

The setting for the world we see in Ready Player One is the year 2045.   It is a drab future where people spend most of their time in a Virtual World called the OASIS to basically escape from the battered real world.  The OASIS is a place where anything is possible.   You can be anything or anyone and pretty much do anything.   The nerdy, socially awkward creator of the OASIS at the time of his death placed 3 Easter Eggs within the world that whoever finds them will get control over the OASIS.   People have been trying for years to find these Easter eggs and no one has been able to find them.  Until Now…….

The protagonist of our film finds the first Easter egg which sets off a race for control of the OASIS between him and his gamer friends and a greedy corporation.    Much of the film takes place in the Virtual world so the film is pretty much a CGI Animated film in my opinion.  For me personally the film was just a little bit too much of a video games look.  I was hoping for something a little more like Tron than the characters all just looking like video games characters.  That being said  the film was a fun action-packed adventure.  I really enjoyed many aspects of the film –but couldn’t help but compare it to the Wreck It Ralph sequel that is set to come out later this year.  When I finished watching this film – I thought that was fun, but I’m really looking forward to Wreck it Ralph now –because it seems like it may do basically the same thing –but better and funnier.

The film is full of Easter Eggs of 1980’s things (many blink and you will miss them) –but I’m assuming because of the licensing issues many of the 1980’s references have been replaced with video game references.  Seeing this movie makes me want to read the book now.  I have a feeling that I’ll like the book even more, since I think it will have more of the 80’s vibe I was expecting to see in the film.  I was also surprised to see how much of the movie relied on The Shining.  I enjoyed that segment – but was not expecting it when so many other 80's references seemed more fitting to the story.