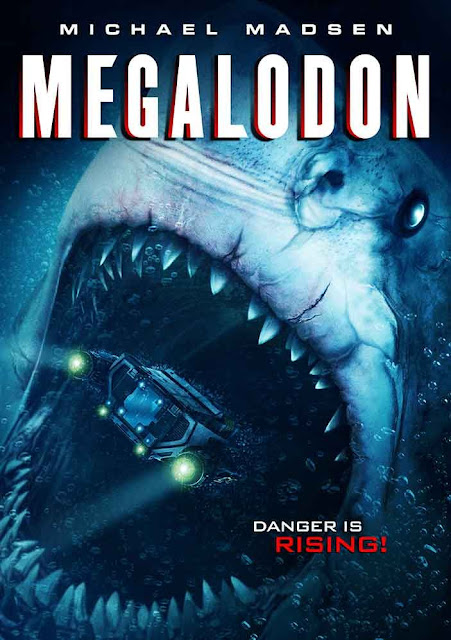 If you follow this blog you will know that I have an unhealthy OCD desire to see pretty much every bad Shark Movie that comes out.    I watch them for the So Bad That it is Good movies and this past week the Syfy channel filled up my DVR with 7 new Bad Shark movies.  Unfortunately for me I started with  Megaladon,  the rip-off by Asylum films timed to come out near the big budget Meg which recently took a bite out of the box office.
This movie was unfortunately not So Bad it is Good…… it was just terrible.   Out of all the bad shark movies I’ve this one has to be one of the worst.  Instead of going over the plot which is minimal I’ll just make a brief list of why this is one of the worse shark movies.  This film was a lifeless waste of time.

1.   Starring Michael Madsen:   He has been in some good movies in his life –but this definitely was a quick paycheck for minimal work.   He absolutely phoned in his performance in his brief appearance in the film.   It felt like he was just reading his lines off a cue card.  It was one of the laziest underperformed performances I’ve ever seen.

2.   Over acting vs Under acting:   The main character that plays the Captain of the ship that must battle the giant shark is a serial over actor.   Which makes the scenes he shares with Michael Madsen even worse.  The over acting and under acting on screen at the same time stuck out like a sore thumb.  80% of the movie is just the captain of the ship yelling orders at crew members.  Occasionally the characters would pretend to fall down when the shark was supposed to be bumping into the ship.

3.    The shark is basically an after thought to the movie.   The only interaction with the shark is when he shallows a submersible for a while…before the people in the sub undramatically just drive back out of it at some point.

4.   Boris and Natasha:   Apparently the filmmakers didn’t think a giant shark could hold the interest of the viewers, so they hired a couple of actors to do some terrible Boris and Natasha style fake Russian accents and have them escape on the ship in the middle of the shark drama.

5.    The worst fake gun fights ever:   There is a scene where the personal on the ship are firing guns at the ocean.   No shark in sight….I guess they forgot to add the Shark to the footage.