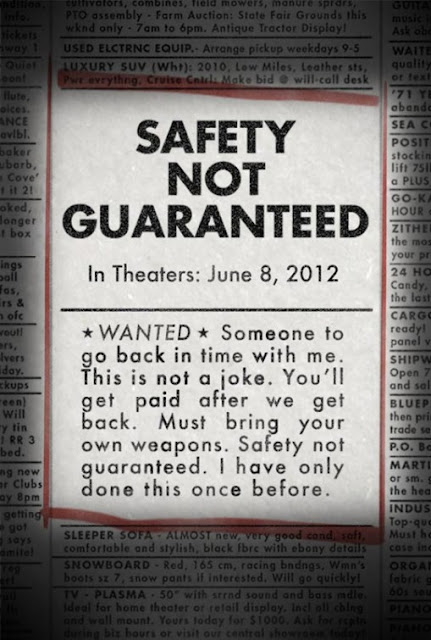 Safety Not Guaranteed features a great cast that includes Jake Johnson (New Girl) and Aubrey Plaza (Parks and Rec).  This was the movie that Colin Trevorrow who went on to direst Jurrasic World.  The story features some magazine reporters looking for an interesting story. They decide to investigate an odd wanted ad that reads " Wanted -  Someone to go back in time with me.  This is not a joke. You'll get paid after we get back.  Must bring your own weapons. Safety no guaranteed.  I have only done this once before". This is great premise that makes for an interesting story.
The movie is actually more of a love story/comedy.   You don't know whether he is actually a Time Traveler or just a little crazy.  The main character played by Aubrey Plaza -answers his advertisement and gets caught up in his life.   I won't reveal how it ends.  It was a good film, but not a great film.  If you are looking for a more traditional time travel film this isn't that.   If you are willing to go along for the ride with a talented cast in what is more a love story --than check it out.

Here is the Trailer

Our Podcast is Here
http://www.superfantasticterrific.com/