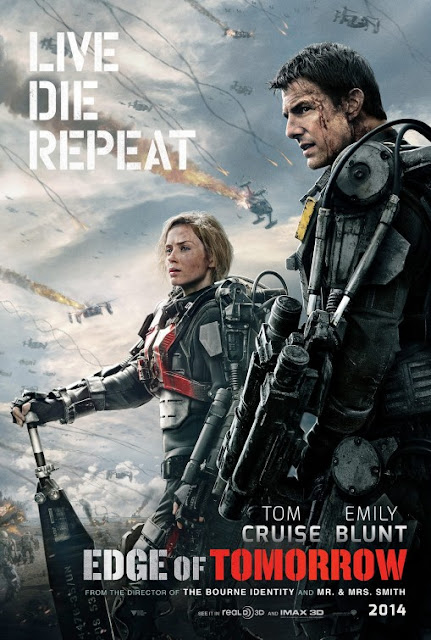 
The Story
The best way to describe Edge of Tomorrow is to take Groundhog’s Day and mix it with Starship Troopers or Aliens.  It is a bad ass Sci-Fi Time Loop movie that stars Tom Cruise as the main character Cage.
It is a story about a marketing guy for the military that has never seen combat before being thrust onto the front lines of a D-Day style invasion against an Alien enemy.  Something strange happens to him during the battle and he dies…only to wake at the exact same place he was the last time he woke up.
This is a great high concept film that plays out just like Groundhog’s Day as we see Cage’s character grow and change as a character as he lives this day over and over again.  The movie does an excellent job of showing Tom’s character progress through the day like it is a brutal old school video game without a save.  Everytime he dies he has to start all over again.  One wonders while watching the film how many thousands of times has he already lived this day.  At one point you can feel his character want to give up…like kid that has wasted all of his quarters at the arcade that can never seem to get to the end of the game to face the final enemy.
The Cast
Whatever you may think about Tom Cruise  (I’ve seen that documentary on Scientology),  he was perfectly cast in this movie.  He was able to nail the role as both the cowardly media guy at the beginning of the film as well as the confident kick ass warrior and hero he becomes by the end of the movie.   Emily Blunt  does a good job as his mentor and companion throughout the film who had the same time loop thing happen to her previously, before she lost the ability).  Bill Paxton (one of my favorites) plays an army sergent in the film to perfection.
The Special FX
The special FX were great.  The Aliens seemed extremely lethal and the D-Day style landing and battle that the main characters takes part in was epic.


I would definitely recommend this to any fans of Groundhog’s Day and Aliens.   It perfectly mixes the genres and includes its own fun sense of humor that was an unexpected bonus to the film.  Just see it ...you won't be disappointed.

The Podcast is here.
http://www.superfantasticterrific.com/
Posted by brad chowen at 6:25 AM