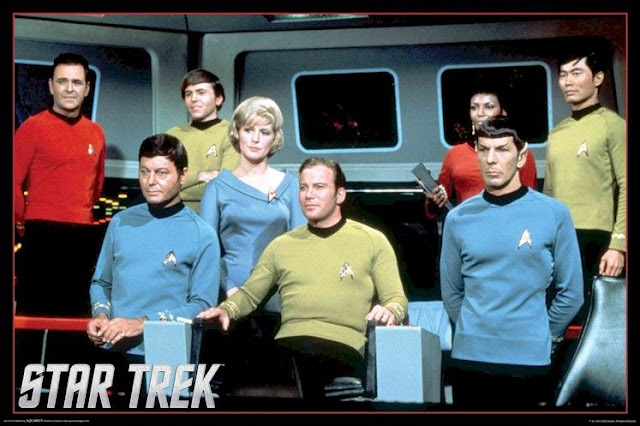 It boldy went where no show had gone before....The adventures of Captain Kirk and the Starship Enterprise took the concept of Wagon Train out into space.  The show was fun and action packed while using the Sci-Fi setting to deal with real life issues in its stories and plots.  I love a cherish this show above all other versions of Star Trek because it had the perfect balance between humor and adventure.  William Shatner played his title role of Captain Kirk with infamous overacting joy, but it worked.  It is surprise Kirk had the time to save the day since he was always busy making out with Green women at ever planet he landed on while some poor hapless red shirted low level crew member was dying.  Kirk was a James Bond in space with his vintage double karate chop fighting technique.

One of the things that worked best in the show that I felt non of its eventual spin-offs captured as well was the relationship between the characters.   Watching Spock, Kirk and Bones interact was excellent comedy against the backdrop of encounters with new alien cultures as the Enterprise went on its 5 year mission.   The show ended before its 5 year mission ended which was a shame.  It eventually came back with big screen movies and several other Star Trek shows,  but only the Wraith of Khan was as enjoyable to me as the original series.  The show was campy and had goofy cheap 1960's sets and special effects, but it was fun and the stories and plots were good.