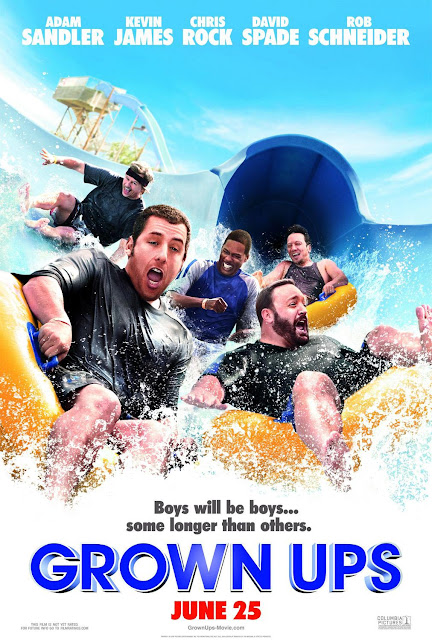 Grown Up was an extremely average comedy that didn't really deliver for me despite a reunion of all star ex SNL members.  It is the perfect example of a movie that all the best scenes are in the trailer and no surprises are in the movie at all.   The plot was thin,   a group of unlikely basketball champions reunite after the death of their childhood coach and basically hang out together.  There is a tiny bit of story where they have a rematch with the bitter rival team at the end, but mainly the movie is just the guys hanging out with their families and exchanges mild insults with each other that don't even equal the insults thrown around in an episode of a Rules of Engagement diner scene from the show David Spade stars in.
The movie wasn't terrible, but it really wasn't much of a movie.  It kind of felt like you were just hanging out with this group of actors instead of a movie.   Like being a part of a comic panel as opposed to watching an actual movie.  It was just to mellow.

Of course it made money so a sequel is on the way.  Hopefully they will make the sequel into more of a film than the first one.