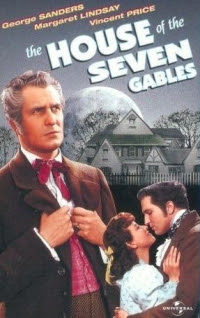 The movie is based on a Nathaniel Hawthorne book and stars George Sanders and Vincent Price as brothers who battle over the inheritance of the cursed family home.   One accuses the other murder of their father....which he is falsely sent to prison over.  The acting was strong in this period piece --but my expectations of the plot lead to the story being a bit of a disappointment.  I guess I expected the families curse to add up to something much more in the line of most of Vincent Price's work.  This movie isn't a horror movie at all and curse and secrets of the house are a dead end story  wise.   The remake of this film in the 1960's was a horror movie.

Email ThisBlogThis!Share to TwitterShare to FacebookShare to Pinterest
Labels: Nathaniel Hawthorne, The House of the Seven Gables, Vincent Price