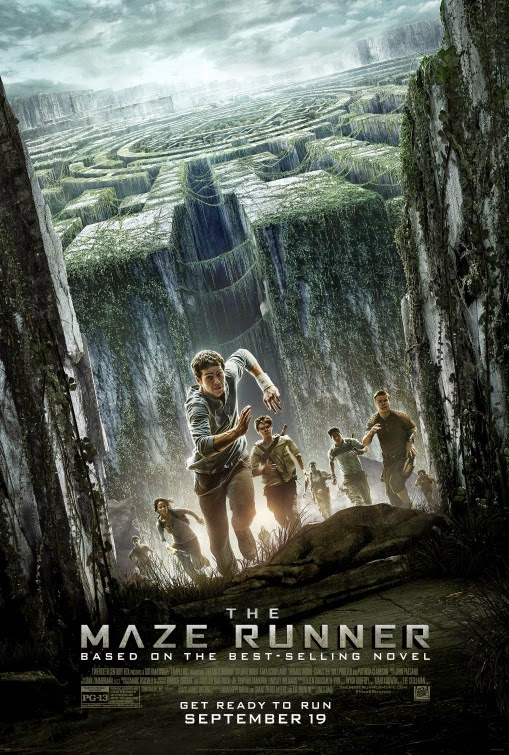 The Maze Runner is basically Lord of the Flies meets the Cube which is a satsifying combination.  A teenage boy finds himself in a metal elevator being released into the middle of a field with no memory and surrounded by boys with spears.   The boys have created a mini society for themselves with rules and duties.  Their little world is a forest surrounded by a giant ever shifting and changing maze.  The workings of this mini-society are interesting to watch as the boy's arrival mixes things up a bit.
The movie was a solid sci-fi mystery as the boy is too driven to just except his fate in this new situation and wants to figure out the Maze.  Like many sci-fi movies the plot is driven by an individual that won't except that life is just how it is and drives for answers.

This thriller which is based on a young adult book series is yet another attempt like  Hunger Games to cash in on similar success.   The Maze Runner is more interesting and enjoyable then The Hunger Games.   The mystery being the Maze is an interesting one that keeps the viewer engaged and drives the story along.  I gave up on the Hunger Games after the second movie Catching Fire which was just boring to watch.


The Ending
Without giving anything away the end of the movie has a cool reveal and gives some answers, yet opens up more questions that made me anxious to see the sequel that should be out in 2015. The movie gives you just enough to make you feeling interesting on what is really behind The Maze.  Are the creators of the Maze good or bad? I guess we will have to turn into the sequel to find out. The Hunger Games: Catching Fire was too much a less interesting repeat of the first movie with the second movie being a lot slower and less interesting.  By the end of Catching Fire - I didn't care what happens to Katniss going forward.   The Maze Runner ---makes me want to see the next movie right away.