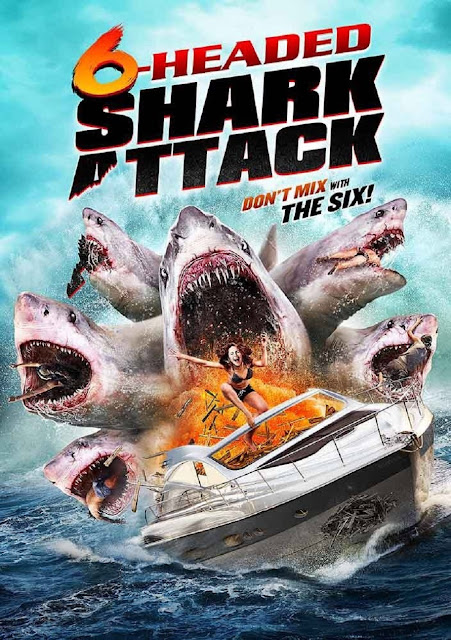 Are they even trying anymore?   I have to ask that question after watching 6 Headed Shark Attack.  Apparently the maximum amount of heads on a Shark to still have a decent Shark Attack movie is about 3 --because that was by far the best of this bad shark movie franchise.   They skipped 4 heads for some reason which I will never understand.  Maybe they should stop just adding heads to the shark because it looks cool on the posters.   Six heads is definitely too many.  I don't even get how the stupid shark can swim effectively with that many heads.  The extra heads didn come in handy when the shark decided to crawl on land.

The story for this addition to the franchise is that a bunch of couples are at a marriage boot camp on an island.  The casting seemed to involve hiring the first 10 random people that showed up to the audition.  The screenplay for this movie was god awful and beyond stupid.  Many of the decisions the characters make were beyond reason.  It is like that commercial where the kids are in a horror movie and one guy suggests -"Let's drive away in that running car" and everyone else  decides to hide out in the garage filled with chainsaws instead.   It must be difficult to find ways for characters to get back into the water in a bad shark movie,  but this movie takes the cake in that department.

They are all safe on land when all of a sudden a major storm is supposedly approaching.   One person claims the storm will flood the entire island and suggests swimming out to a couple of pontoons with a tent on them and to rise with the tide.   What are you kidding me.   No lets all go to the Lighthouse instead.    By the way the storm never apparently arrived....  I guess they couldn't afford rain for this movie.    It was just so terrible on so many levels and yet never passed into "So Bad it is Good" Territory.   At least this movie ties into the previous ones and explains that this is where the shark originated from.

A word of advice:  Less heads and more sharks next time.  Or maybe actually try and write a script instead of giving the movie the green light based on the cool poster.