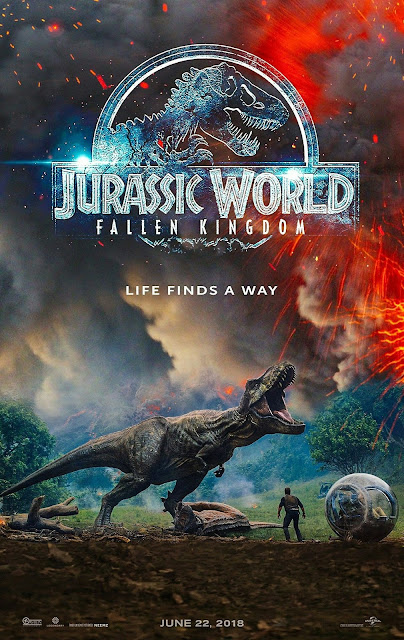 I’m not sure where the Jurassic World franchise goes from here, but as the box office proves Dinosaurs are still a big draw.   The film has quickly grossed over a billion dollar mark worldwide.

Jurassic World: Fallen Kingdom is a fun roller coaster ride of a summer movie.  Chris Pratt and Bryce Dallas Howard return in a silly and unbelievable story (I know weird to say about a dino movie).    Several year after the events of Jurassic World they are enlisted by a rich billionaire and ex-partner of the creator of Jurassic Park to help and save the remaining dinosaurs on the island before a volcano explodes.  What could possible go wrong right?  The dino rescue attempt was way over the top and ridiculous –but a lot of fun.   Question why did the creators of Jurassic World build the park on an island that had a possibly deadly volcano?   That seems a little odd.  So even if the tragedy that occurred in Jurassic World hadn’t happened the island and theme park would have been destroyed anyway in a couple of years.

Jurassic World (despite its flaws) was special.   It took us to the theme park that the original Jurassic Park teased us.   It dug into our nostalgia and at least briefly took us to Jurassic World in operation before all hell broke loose.    The franchise will no longer have the park factor as of this episode in the series.  The action needs to find somewhere else to take place going forward.   In the case of Fallen Kingdom that location is the house of the billionaire which has a cool private natural history museum.   This makes for a great location for the second half of the film.   Like the previous film this one is full of action and excitement. The twists of the film aren’t really a surprise and are predictable if you are paying attention. The second half of the film takes place back at the mansion with a bunch of international billionaires bidding on the dinos in an auction.   Of course all hell breaks loose in the middle of the auction as our heroes stuck in a dino jail cell escape with the help of a rampaging head butting dino.   The last part of the film has them scrambling around the mansion with its museum being chased by a super dangerous new hybrid dino.   This part of the film is super fun and includes some incredible dino scenes.
If you can look past the awkward, silly plot and story it is still a fun ride.  It just doesn’t live up to Jurassic World (which also had a pretty silly storyline)  I’m curious as to where the franchise goes  from here.  Some Dinos are now loose in the wild –others are in the hands of the people from the auction and then there is the other cloning issue.