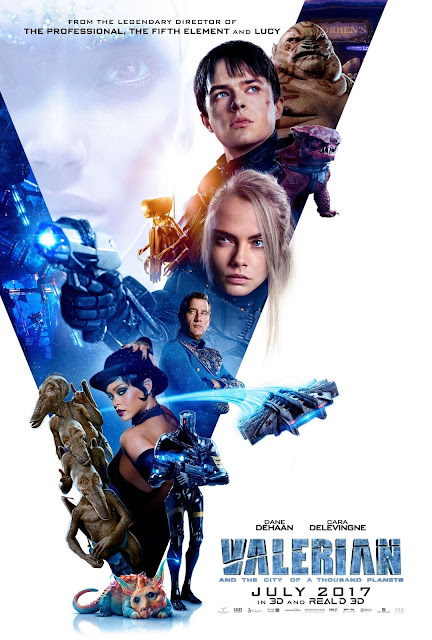 If you look up reviews of Valerian and the City of a Thousand
Planets you will see reviews that are either 10 out of 10   or 1 -2 out of 10.  There seems to be no middle ground.  People either love it or hate it.    Ironically I found myself somewhere in the middle.  It is a strange and weird film directed by Luc Besson this film has the look and fell of his other weird Sci-fi Film the Fifth Element.

The Good:
The film has some amazing visuals.  There are some cool and interesting creatures and planets. The world building is interesting. The floating Space Station/City Alpha is a fertal ground for the interesting. After a strange opening sequence that gives you a montage of the space station over centuries that is a showcase for some strange looking aliens.   The film goes into a beautiful section that seems like something out of Avatar.  You get a glimpse of an elegant alien race living their lives on a tropical beach.  Then suddenly tragedy strikes.  This segment of the film was gorgeous.  The visuals are where the film is at it’s best.   The world and characters designs are definitely interesting.   Luc Besson definitely has a unique and interesting visual style.  Some of the action sequences in the film were visually entertaining.

The Bad:
I can’t understand the casting.  The two main actors are just not good in this film.  I don’t know if it is their acting or the writing.  The dialogue is awkward.  I would have never picked these two actors as the stars of what could have been an epic film.  Instead the film is an epic mess.  I couldn’t find myself caring about or identifying with the main characters.  The story was just weird.   I know that it is based on some French comic book and maybe that is what was off.   Maybe this film is just some weird French thing that US audiences can't get.   The humor of the film just didn’t translate for me.   The main plot had a specific direction –but it felt like individual scenes were just dropped into the movie because they thought they might be interesting.   For example the singer Rihanna is in the film as a shape shifting gelatin like creature.   Her introduction is basically a strip tease where mid act she changes outfits magically about 6 times.  This may have been a fantasy for the director -but really is completely unnecessary to the plot at all.   It just seemed like maybe the director threw in a bunch of cool comic book images from the book that he loved and tried to weave in the main story as an after thought.