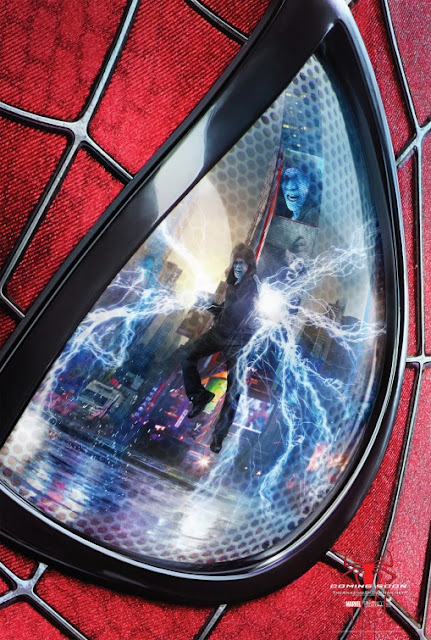 It took me awhile to get around to watching The Amazing Spider-Man 2.   Mainly because I felt the reboot from 2012 was a waste of time basically remaking the already universally known Spider-Man origin story.  You can read my thoughts on that film below.
http://bradgeekness.blogspot.com/2014/06/the-amazin-spider-man-2012-5-out-of-10.html


The Amazing Spider-Man 2 was a more enjoyable than the first one.  We didn't have to revisit already stomped on ground this time around.   The action sequences were visually electrifying (sorry had to go there) .    My thoughts about this movie were still very mixed.
I was visually engaged with Spider-Man and his webslinging actions --but disengaged from the story which seemed loosely patched together.   I've never been a big fan of Jamie Foxx and his character of Electro wasn't a strong point of the movie for me.   His character's transformation from nerd that no one notices to villain was very sudden.  I didn't really buy into his storyline.  Spider-Man and Gwen Stacy's "off again " "on again" relationship stuff seemed tired and bland.   The Green Goblin storyline worked much better as a headline story in the previous Spider-Man series instead of a sub story to Electro and when he shows up near the end it felt really forced.  And what an absolute waster of Paul Giamatta.   To waste an actor of his talents with a throw away sequence at the end of the film was a shame.


So again I liked all of the action pieces  (more than I did Batman vs Superman).....but not the story.     I hope that Disney in connection with Sony and MCU will do Spider-Man right this time around in the upcoming Spider-Man Homecoming next year.

The Facebook page is here
https://www.facebook.com/SuperFantasticTerrificPodcast/?ref=bookmarks
Posted by brad chowen at 8:47 AM