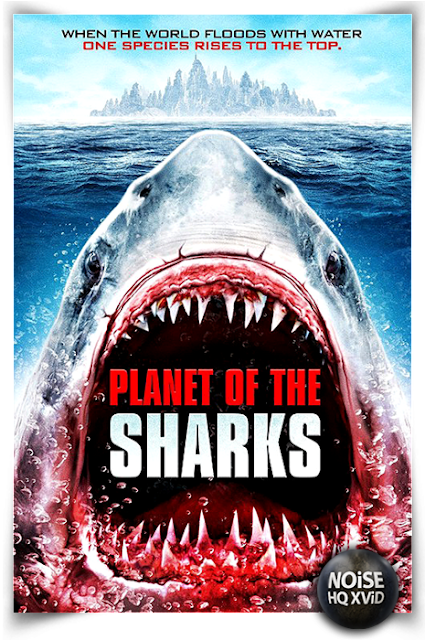 Have you ever wondered what the movie Waterworld would be like if it had more sharks in it???  Well the Asylum film Planet of the Sharks answers that question.   Not much better.

The Planet of the Sharks is a super low budget Waterworld with Sharks.  The movie opens with a floating city in a world covered in water being attacked by a bunch of sharks that are lead by a mutated alpha shark.  The city is destroyed and a larger floating city goes to investigate and they find one sole survivor.  The rescue boat then goes to a research station that is working on trying to do an experiment to reverse the waterlogged planet.  They travel to the other city which is about to be attacked by the band of sharks.  This city is supposed to have about 450 people living on it --but due to a utter lack of anything resembling a budget the movie can only afford about 10 extras...so the big battle against the sharks consists of 10 people with spears standing on a floating dock on what looks like the Universal Backlot.  The brief battle has decent looking CGI sharks and gives you a brief hope that the film might be so bad it is good.   But it is actually just bad.

The rest of the film is a story about trying to use an underwater volcano to kill the sharks.  The big action scene is a person on a windsailing board jumping CGI sharks like the Fonzie from Happy Days while trying to pick up a beacon.  The movie ends with the group of scientists successfully setting off a rocket that reverses the flooded Earth.   This movie is just waterlogged.  It must have had a budget the size of a TV episode of Xena Warrior Princess.
The movie tries to create a false sense of peril with its overly dramatic soundtrack which goes on even when nothing is really happening on screen.  Bad Shark movie fans.......this is not the Bad Shark movie you are looking for.  P.S. the sole survivor does and says nothing throughout the entire movie and I'm not even sure why that character is even in the film unless it was the producers daughter.