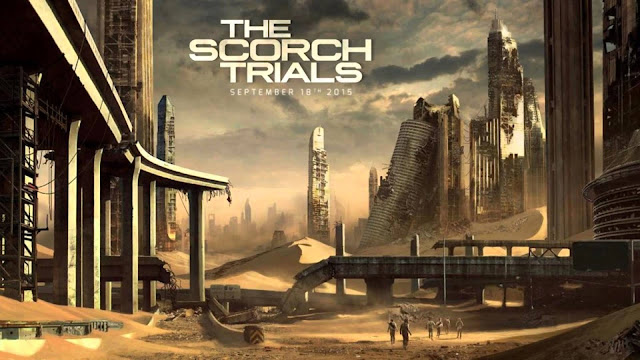 This movie covers the second book of James Dashner's 3 book series that was adapted for the big screen.

The first movie was basically a Lord of the Flies meets The Cube. (An interesting mix).
Here were my thoughts on the first one.
http://bradgeekness.blogspot.com/2015/01/the-maze-runner-better-than-hunger.html


The first movie had a cool and unexpected nature to it and the ending –just left questions that you want to know more about.
The sequel picks up where the first movie ended with the Gladers being rescued and taken to a facility to supposedly have a better life.  Of course things aren’t exactly what they seem and Thomas the man protagonist –doesn’t just accept things at face value.  With the help of a mysterious teen that has escaped from a different maze, Thomas makes a discovery that causes him and his friends to break out of the facility and make a run for it –through a wild area called the Scorch.

At this point the movie takes a dark and exciting departure from the previous film.  The area called the Scorch which includes the destroyed cities of Earth is inhabited by Zombie like creatures and what is left of society struggling to survive makes for a thrilling movie.  I was sitting in the theater watching this and thinking this is why I love movies.  I go to movies to be thrilled ……To see things I don’t see in the real world and this movie was a sequel that improved on the already good original.

Zombies, dark tunnels, an escape through  exploding building and half fallen sky scrapers all lead to good fun.  The movie had some great scenes and went in some weird directions.    The only drawback to the movie was the ending which seemed to lack a level of epicness that it needed. It probably would have been a 9 out of 10 for me if the ending hadn't have seemed so small.   Being the middle section of a 3 part story the movie didn’t have a strong ending as the teens finally make it to their destination in the film and it is basically just a small group of rebels that look like extras from Red Dawn.  A twist occurs near the end that the movie telegraphs a little too much –so I wasn’t surprised when it happened.   The movie sets itself up for the final film (which I’m looking forward to)—but the story now stripped of some of the mystery from the first film needed a better end to its second chapter.

The cast was good.   My favorite character Minho played by actor  Ki Hong Li was great in both films.  The addition of Aidan Gillen from Game of Thrones fame was a welcome addition.  I can see him getting good roles for years to come.


This film series was an obvious attempt to try and create a franchise along the lines of Hunger Games…..Every movie studio is trying to find the next Harry Potter, Twilight or Hunger Games.
As a result several good films like I am Number 6 (which was meant to be a series) have been made and not succeeded in making it into a series.  I’m glad The Maze Runner ---will apparently get a chance to end its story.  I personally like it better than the Hunger Games –which I grew bored of after its second film.

Check out our Movie Podcast herehttp://www.superfantasticterrific.com/
My Movie page on Facebook is here