So today I’ll discuss those 2 movies in a Bad Shark movie battle.

Roboshark 2015 8 out of 10
SO Bad it was Good!  -but they were in on the joke.
Up first was Roboshark—which was  an intentionally bad shark movie.  It was self aware of everything that it was doing.  The overacting was on purpose….It was tongue and cheek and reminded me on the tone of the movie Big Ass Spider.  The ridiculous story involved an alien probe landing in the ocean and being swallowed by a shark –which immediately transforms into a Roboshark.  The Roboshark heads for Seattle and starts to wreck havoc.
In the old days Shark movies had to find a reason to keep people in the water after the initial shark attacks.   A problem I have always referred to as the ”Jaws Scenario” which usually features the mayor or someone like that declaring that they can’t close the beach –because of all the money the town would lose in tourism.   The best joke about this is in the Funny or Die short  Shark Pool...
“Just don’t go in the pool”

Well modern day bad shark movies have solved this problem by taking the sharks out of the water.   Sand Sharks featured sharks that traveled under the sand like Tremors,  Ghost  Shark could appear in a glass of water or a slip and slide, Sharknado –just started dumping them out of the sky.  Roboshark –uses the sewers to travel and then can show up in a park or coffee shop.  The best scene is when Roboshark shows up in the mall.

The visual effects in Roboshark are cheesy—the story is silly and the acting is terribly over dramatic—but they seem to be in on the joke.   The story focuses on a TV weather girl trying to break a big story and her husband who works for the water department that ends up tracking the Shark via the sewer alerts.
Roboshark is randomly killing people all over town. Meanwhile the reporter has been taken off the story and decides to take her reporting viral on youtube with the help of her daughter who ditches school to help her.   The movie gets super silly after the military and Bill Glates  (yes Glates) step in to try and take out Roboshark with no success.    I was laughing out loud at some of the silly dialogue in this flick.
The story takes a twist turn…when Roboshark starts following the daughter’s Roboshark page on twitter –the alien intelligence inside Roboshark is  trying to communicate and it turns out he is basically just ET wanting to go home….  Of course the military tries to destroy it every time they are making progress communicating with it.  I get the  ET thing –but this ET  kills for no reason—so I’m not really sure we should try to communicate with it and help it get home.  The over the top acting and dialogue made me laugh and so I enjoyed this intentionally bad shark movie.  Not everyone is going to enjoy this silly bad shark movie---but for some reason it worked for me.
Here is the Trailer for Roboshark 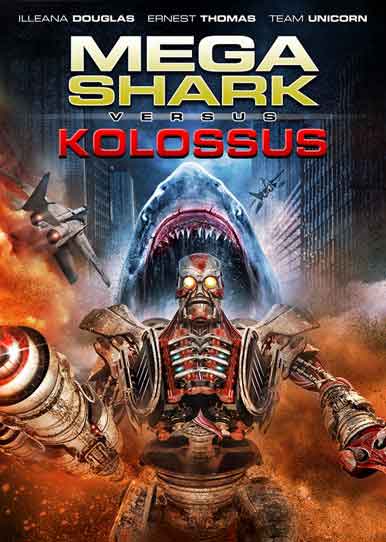 Megashark Vs Kollossus on the other hand –was just bad.   I guess I just feel the need to see every bad shark movie out there.   How else can I explain watching this terrible shark movie.   None of the Megashark movies have been good.  The original caused a sensation on the internet with it’s great trailer that featured a giant shark leaping into the air and taking down an airplane.  But the movies have never lived up to the concept. The movie posters are better than the films.  The Megashark movies rely on clever editing to try and create tension and excitement where none exists.  The movie features a Sam Jackson wannabe –yelling to take out the Megashark  from one of the films few set pieces inside a battleship.   This film has a cheesy plot that involves some giant man made robot that ends up battling Megahark briefly at the end of this forgettable film—before a pointless plot twist occurs.   While watching this film you will ask  “  Megashark is actually going to fight the cheesy giant robot at some point right” 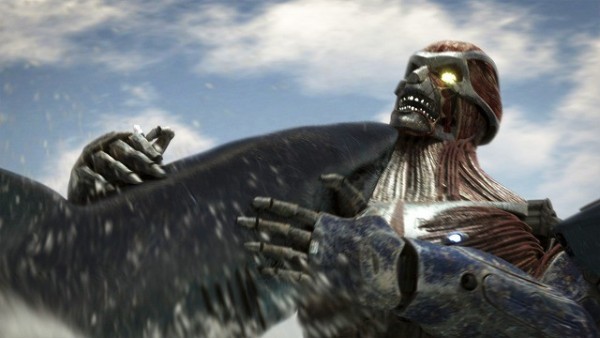 You get to the fight and it is a total dud.  This Megashark is a total bomb.    I don’t think I smiled or laughed at this movie once---I just waited for it to end.     I was so let down by this bad shark movie that I put off watching Sharktopus vs Whalewolf for another day.


For my Guide to Shark Movies good and bad go here.
http://bradgeekness.blogspot.com/2012/11/guide-to-shark-movies-good-and-bad.html

The Verdict:  ET phones home the victory over Megashark My Movie page on Facebook is here