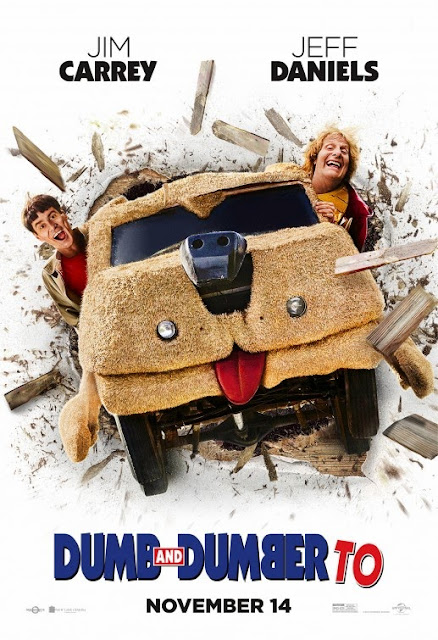 I loved the original Dumb and Dumber.    I was looking foward to a sequel---but it just felt like they waited too long to do it.  For some reason this Dumb and Dumber Sequel --just seemed dumber.
The original movie never got a sequel because Jim Carrey was too big at the time. He had too many projects in the works and was getting 20 million a movie and didn't need to be in a sequel.   Well 20 years later Jim Carrey isn't in as high a demand and so the studios figured ---the time was right to do a sequel.

Well I guess they were wrong.   My wife turned to me while watching the movie and said "This is just stupid"....  and as much as I wanted to argue with her -I couldn't.   It just wasn't the same even though it was exactly the same.    Maybe that was the problem??  It was exactly the same...there was nothing new or nothing worth discovering with these characters and there return to the big screen.
It was too little too late.  The jokes fell flat and there were only a few moments where I even cracked a smile while watching it.
It felt like I was watching a bunch of bad outakes from the original film.  The stuff that would have been cut out of the first film.   Or maybe I've just matured and don't find this dumb humor funny any more (No that can't be it ).  I really can't explain why I didn't like it. The type of jokes were literally the same.  The Plot of the movie was pretty much the same.  It was like watching  a remake that is so much the same that there is absolutely nothing new to get out of it.

Dumb and Dumber 2 was just that Dumber and unecessary.

My opinion --watch the Trailer which has all of the best scenes and skip the movie.