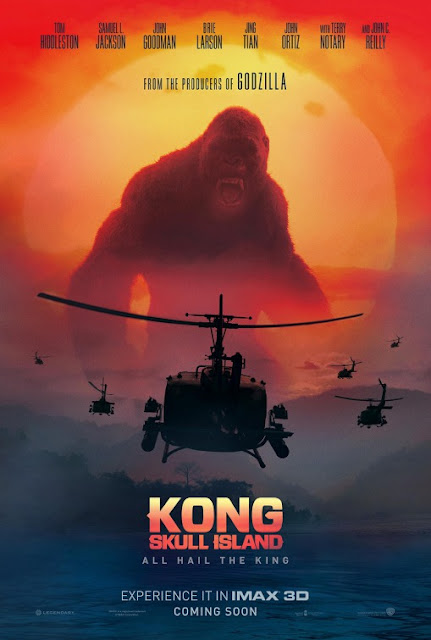 I recently got out and saw Kong Skull Island this past weekend and enjoyed it.  I immediately wanted to re-visit  King Kong from 2005 to compare the two films.

The Differences in King Kong himself
Skull Island Kong in the new film is absolutely gigantic.  He seems more like a giant mutated bigfoot and spends much of his time upright. The scene where the helicopters first encounter this Kong is awesome.   The military helicopters are no match for this giant Kong.   Why is this new Kong so oversized?   It is obvious that they are trying to set up a movie universe in which this King Kong can fight Godzilla.   The story focuses on Skull Island basically being a doorway to Hollow Earth which is a land of monsters. Skull Islands creatures aren't dinos, but instead some type of Mysterious underworld beasts.  The 2005  King Kong was more like a giant Gorilla living in a lost continent of oversized beasts. Peter Jackson's Kong is a more likable and humanized Kong. (Thanks to Andy Serkis mo cap performance).  Basically this Kong lives in a land of Dinosaurs.

The Action
Both movies have some great action sequences.
Skull Island:  Features a great sequence as Kong takes on all the helicopters.    There are some good action sequences as the main characters try to avoid the creatures that live in the Hollow Earth and Kong's battle with this creatures near the end of the film is exactly what you would expect and hope for.   Samuel Jackson is in typical bad ass mode and is out for revenge on Kong for all the fellow military members he has lost which leads to some Michael Bay style explosions.
King Kong 2005:  Features some great action sequences as well.   (Okay so the Dinosaur stampede was a little over the top)  but when Kong squares off against three T-Rex's while protecting the main heroine... that sequence was epic.  And since this Kong follows the original 1933 story we also get Kong loose in New York and the iconic  Empire State Building sequence. 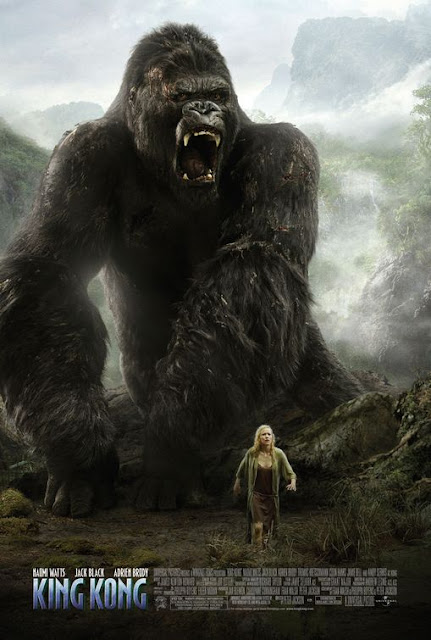 The Story :
King Kong from 2005 is a loving tribute to the original 1933 film. It has the tone and heart of the original film and the visuals are spectacular.   Kong falls in love with his sacrifice in the form of beautiful Noami Watts and it is eventually his undoing.  It is a Beauty and the Beast story where Kong is basically the misunderstood hero.   My only complaint about the film is the length as it is a long movie.  It starts a little slow taking awhile to develop the characters and get to the Island.  Once at the island it is an amazing film that stands up there with some of the Jurassic Park films.
Kong Skull Island 2017  is a different Kong.    Kong is still basically the misunderstood hero.  After all he is just trying to protect his island and the villagers on it from the creatures below.  Samuel L Jackson happens to invade Kong's Island and pays the price for that.  It is a fun Kong movie and a decent take on the Kong story, but is missing the love story element and the heart that Peter Jackson's Kong was able to recreate.  I think they were more concerned with setting up this giant Kong as a bad ass for future possible films  (vs Godzilla for example)  then telling the best Kong story.    Still a fun watch regardless.

The winner in this battle of Kong's for me in the Peter Jackson version.   Although if the two Kong's themselves actually battled  The much larger(less Gorilla like)  Skull Island Kong would surely win.