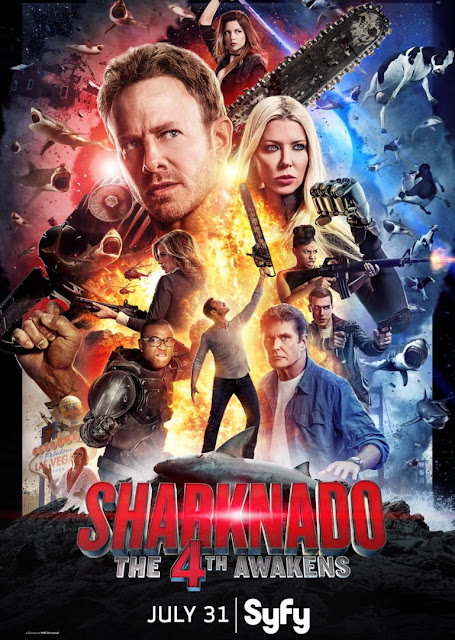 Throw out the all logic and any sense of a coherent story and you get Sharknado 4.   It feels like the writers and director sat around a campfire telling "Can you top this"  scenes and then pulled them out of a hat and pinned them to a chalkboard.   The story is an absolute mess—just like Las Vegas after the Sharknado hit.          But somehow it doesn’t matter.   If you are tuning in to watch Sharknado 4 you should be well aware that you are not getting a quality plot.   You are tuning in to see ridiculousness.  You are tuning in to see Gilbert Godfried as a storm chaser yelling at the camera about a Cownado.  The Franchise is a parody of itself at this point.  It contains references to other films while throwing in random cameos of C list actors.

Finn Shepard played by Ian Ziering is basically the Angela Landsbury of Sharknados.   Everywhere he goes a Sharknado shows up.  It is almost like they are following him (like the Shark in Jaws 4).     The movie starts 5 years after the previous film with Finn attending the opening of a Shark themed Hotel that was built by some Tech company that has figured out how to keep the Sharknados from happening.    Of course what would a Sharknado movie be without a Sharknado???   A Tornado/Dust Devil starts up exactly when Finn’s older son is jumping out of an airplane with a girl he just married.  What follows is one of the most ridiculous scenes in movie history.

In Sharknado there is no logic or sense of reality at all and again it doesn't seem to matter.  Sharknado is a lesson in absurdity.   The concept of this movie series defies the rules of film making.   The first movie was one of the best SO BAD IT IS GOOD movies –that just happen sometimes.   Somehow it has turned into a franchise that the Syfy Channel programs an entire weekend of Bad Shark movie programming around.   When you tune into Sharknado weekend ---not only do you get Sharknado 1 -4 –you also get a batch of new absurd Shark films.    Atomic Shark.  Dam Sharks, Ice Sharks and several more.   (Stay Tuned I’ll be blogging about those soon as well).
So my suggestion is watch Sharnado 4 if you enjoyed the first 3.
If you didn’t enjoy the others ---you aren’t going to magically start liking them now.   It is a completely silly, over the top, nonsensical carnival ride....Total Cheese.....yet still enjoyable.


Our Podcast is Here